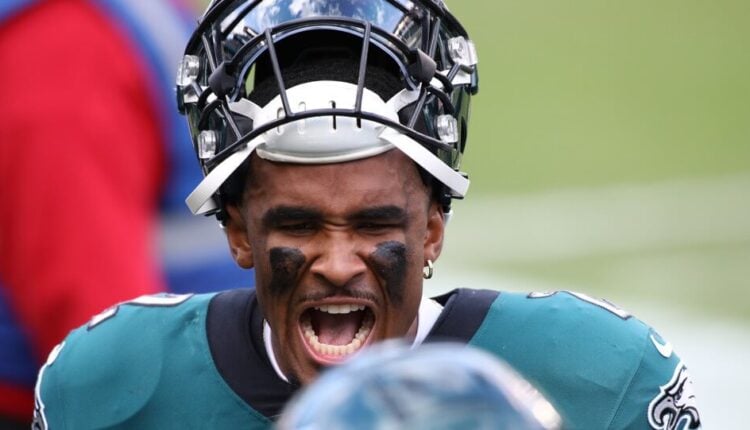 The 2022 Opportunity Tracker is where fantasy managers come to discover fantasy value and potential sleepers. We uncover value by analyzing team target distribution and adjusting for offseason additions and subtractions. Many players will have new homes in 2022-23 and leading up to the NFL Draft (April 28th-30th), this series provides some high-level insight into the fantasy impact of important offseason moves for each team. Using this insight, we can help managers stay ahead of the curve in dynasty leagues and uncover vacant roles where teams may rely on newcomers and/or rookies to make an impact.

The Philadelphia Eagles offense is built around the run game and the unique things they can do with Jalen Hurts’ athleticism. They ran the most run-pass options (RPOs) in the league last year and were seventh in play-action calls.

Hurts had ten rushing touchdowns last season, thanks to 6.2 wOpp per game, and a 31.8% red-zone carry-share. The Eagles throw the ball about a third of the time out of their RPOs, which provides a slight increase in potential value per play (on RPOs) for Hurts. The ceiling is decidedly lower for Hurts than for the top five or six fantasy quarterbacks, but the Eagles QB is poised to build on last season’s QB9 finish.

For Miles Sanders, the talent and efficiency metrics are fantastic, but his health struggles have delayed his fantasy success. We will get into his injury history in a future article but suffice it to say that he has been a bit unlucky in that department.

He saw 11.3 wOpp per game in 2021 across the whole season, but from weeks 5-15 (omitting week 6 – he played 12 snaps before leaving the game), Sanders saw 17 opportunities per game. That puts him between RB15 and RB16 (Zeke and DeAndre Swift) for base workload over that stretch. This is a more predictive offensive sample than the entire season, as Jordan Howard is no longer on the roster and left behind 67.6 wOpp per game to be soaked up by Sanders & Co.

The Eagles led the NFL in rushing touchdowns and yet their lead running back (Miles Sanders) didn't score a single touchdown.

Sanders needs to be handcuffed, and the numbers say that Kenneth Gainwell is the guy to have (+2.7 wOpp/g over Boston Scott). If Miles can stay healthy, the ceiling is high-end RB2. Don’t forget that Boobie did not score a single touchdown last season, despite seeing 1.9 red-zone opportunities per game. Positive regression is coming.

This passing offense is low-volume and only supports two pass-catchers currently. Dallas Goedert saw 5.7 targets per game after Zach Ertz was dealt midseason, putting him inside the top-11 in that category for TEs. He was also used more in the red-zone during that period, earning a 10.5% red-zone target share. Goedert remains a middling starting fantasy-TE value at his current 6th-round ADP. The addition of Zach Pascal may also soften some of the coverage in the middle of the field in 2022.

Devonta Smith earned a 22% target share in his rookie season, averaging 9.8 wOpp per game. He also led Eagles receivers in red-zone target share with a 14% clip. He is an excellent dynasty asset and looks poised to build upon his WR30 finish last season. Given the low volume in the Philadelphia passing game, no other Eagles pass-catcher is roster able at this point.

Dallas Cowboys: Cooped Up, No Longer

Dak Prescott regressed last season due to lingering health issues. The key to his fantasy upside is his rushing ability, but lingering ankle and shoulder injuries prevented him from using it in 2021. He still saw just under one (0.94) red-zone carry per game, but that number was down from 1.2/g in 2020. The Cowboys’ offensive philosophy will (probably) never change, so Dak will have solid fantasy value regardless, but keep an eye on his health during the offseason to determine his upside.

Ezekiel Elliot was arguably the biggest bust in fantasy football last season. After being drafted in the first round, he finished as the RB15 on a per-game basis. There are a few reasons for this:

Zeke is no longer a top-5 fantasy running back, but he can still be drafted in the third, or even second round and return value. As for Pollard, evaluating his fantasy value is tough. First of all, he should be rostered in 100% of leagues because Zeke will be rostered in that many leagues. He is no longer purely a handcuff but is still being drafted as such. The hype should pick up on him as the season approaches, but nevertheless, for Zeke managers, he is a must-own.

Pollard averaged 10 wOpp per game in 2021, while still returning kickoffs (generally not something full-time players do). The Cowboys have said they want to line him up in the slot more, and if this is true, he could approach Kareem Hunt-type usage. In that case, Pollard becomes a great value in the eighth round.

This doesn’t feel like a hot take because the numbers seem so obvious, but managers have been drafting Schultz as TE14, thus far, which is criminal. Take a look at some of these opportunity numbers for Schultz in 2021:

Now look at the offseason indicators:

Most of Cooper’s target share will be inherited by Michael Gallup and Ceedee Lamb, but Schultz should benefit from some added usage across the middle of the field. He will also have, theoretically, less competition for red-zone targets in 2022.

There’s no reason why Dalton Schultz can’t be THE TE1 this season.

Amari Cooper was traded to Cleveland which has fantasy managers fawning over Ceedee Lamb. He was used in many ways in 2021 and averaged 12.4 wOpp per game. That number should grow in 2021 as the top receiver in Dallas. Ceedee has top-5 fantasy WR upside in this role.

The Cowboys re-signed Michael Gallup this off-season which was one of their top priorities. This is a nice-value signing for the Cowboys, as he is not quite as good of a route-runner as Amari Cooper, but he does have Cooper’s speed. Gallup (11.4 wOpp/g) is not going until the 9th round and makes for an excellent mid-round flier, given how pass-heavy this offense can get.

James Washington was brought in to soak up some targets in Dallas and should serve as a deep threat primarily, in this offense.

Check back tomorrow as we finish off the NFC East with the Giants and Commanders.