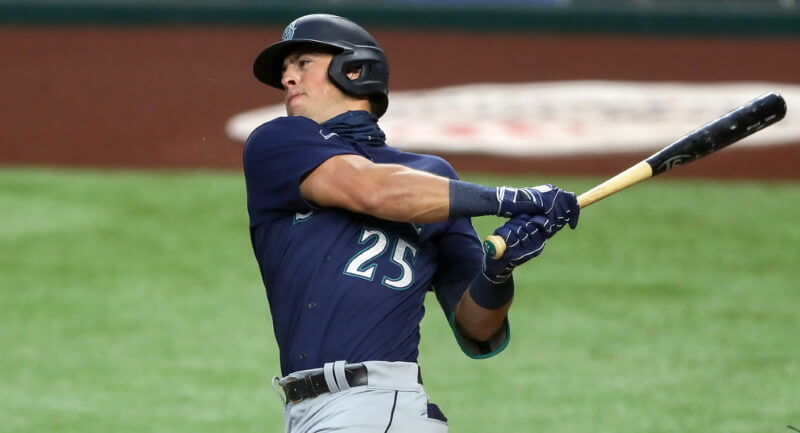 I’m back in the booth!

During the fantasy season, waiver wire reports, injury updates, updated rankings, and so much more are all apart of our weekly routine. We want to know which hot bats we should be targeting or how long a player will be on the injured list so we can set an optimal lineup for the upcoming week.

Well this season, I’m going be to writing a regular player trend series. In this series, I’ll essentially be looking at a player’s past seasons and noting if their past habits, milestones, or expectations are still attainable or feasible. There are always pitchers adjusting their pitch usages and batters trying to increase their launch angles. Understanding what player trends we should be paying close attention to can help give you that information you need to become a better fantasy player.

Without further ado, let’s dig into my first player trends piece of the 2021 fantasy season.

Is Dylan Moore capable of challenging 20 home runs and 20 stolen bases in a single season?

As a minor league player, Moore was always a stolen base threat. He stole 92 bases over 447 career games. He’s also always had acceptable pop, with 42 home runs over 1,547 at-bats. Playing between AA and AAA in 2018, he had a .299 batting average, 14 home runs, and 23 stolen bases over 408 at-bats. If he had reached around 600 at-bats that year, he would have likely had his first 20/20 season as a professional baseball player.

So we know he has threatened 20 home runs and 20 steals in his minor league days, but can he do so at the major league level?

As of right now, Moore has a .211 batting average, 22 home runs, and 31 stolen bases over his first 503 major league at-bats. Now that average is obviously unappealing, but we see that Moore is capable of reaching 20 home runs and 20 stolen bases over a full season’s worth of at-bats. To start 2021, he already has 5 home runs and 8 stolen bases over 119 at-bats, putting him well on pace to reaching that 20/20 mark on a per at-bat basis. According to Statcast, his sprint speed has ranked in the 79th percentile this season (28.1 feet/second) and his quality of contact his been solid: 110.3 max exit velocity, 11.7% barrel rate, 32.5% hard-hit rate, and an optimal 16.7 degrees average launch angle.

Whether his batting average will be acceptable or not is another discussion for another day, but all signs point to Moore reaching that 20/20 mark this season as long as he stays healthy.

Note: Moore is currently on the injured list with a left calf strain, hurting his chances of reaching 20/20 this season.

Maeda started throwing his split-change in his 3rd MLB season and has thrown the pitch 1,336 times in his career. It has allowed a .195 batting average, .210 weighted on-base average, 29.0% K-BB, and 21.3% swinging strike rate. More than that, it has a career 61.4% ground ball rate. Maeda has learned how to successfully tunnel his pitches and that has made his split-change even more effective. In fact, his ability to tunnel his pitches while having a consistent delivery could be the biggest driver of his split-change’s success. It’s been arguably his best offering for a while now.

Well in 2021, his split-change hasn’t been as effective as past seasons. He’s thrown it 195 times and it has allowed a 91.4 mph average exit velocity (career-high), .246 batting average (career-high), 24.1% strikeout rate (career-low), and 13.3% swinging strike rate (career-low). Interestingly enough, his four-seam fastball, sinker, and slider are all allowing more hits this year as well. And when you compare his 2020 pitch charts to his 2021 pitch charts, you can see that in 2021, he’s been leaving a lot of pitches near the heart of the plate:

It’s almost like if he’s not completely in sync with all his pitches, his entire arsenal is off, and this makes sense. I mentioned above how his ability to tunnel his pitches could be the biggest driver of his split-change’s success. Well if he’s not commanding his slider and hard pitches well, it’s going to be very hard for him to throw a successful split-change on a consistent basis.

So no, Maeda’s split-change is not a dominant pitch right now. His shaky command is ruining his ability to consistently tunnel his offerings and keep hitters guessing. When he starts throwing his slider around the edges again while commanding his hard pitches well, his split-change will become a dominant pitch again. But for now, all we can do is hope that Maeda improves his command going forward.

Note: Kenta Maeda is currently on the 10-day injured list with “general soreness” in his “forearm, bicep, elbow area,” according to Twins manager Rocco Baldelli.

In general, Pederson isn’t a great contact hitter. His zone contact and contact percentages have been below average his entire career. More than that, his struggles to hit for average against breaking pitches have likely hurt his ability to make consistent contact. 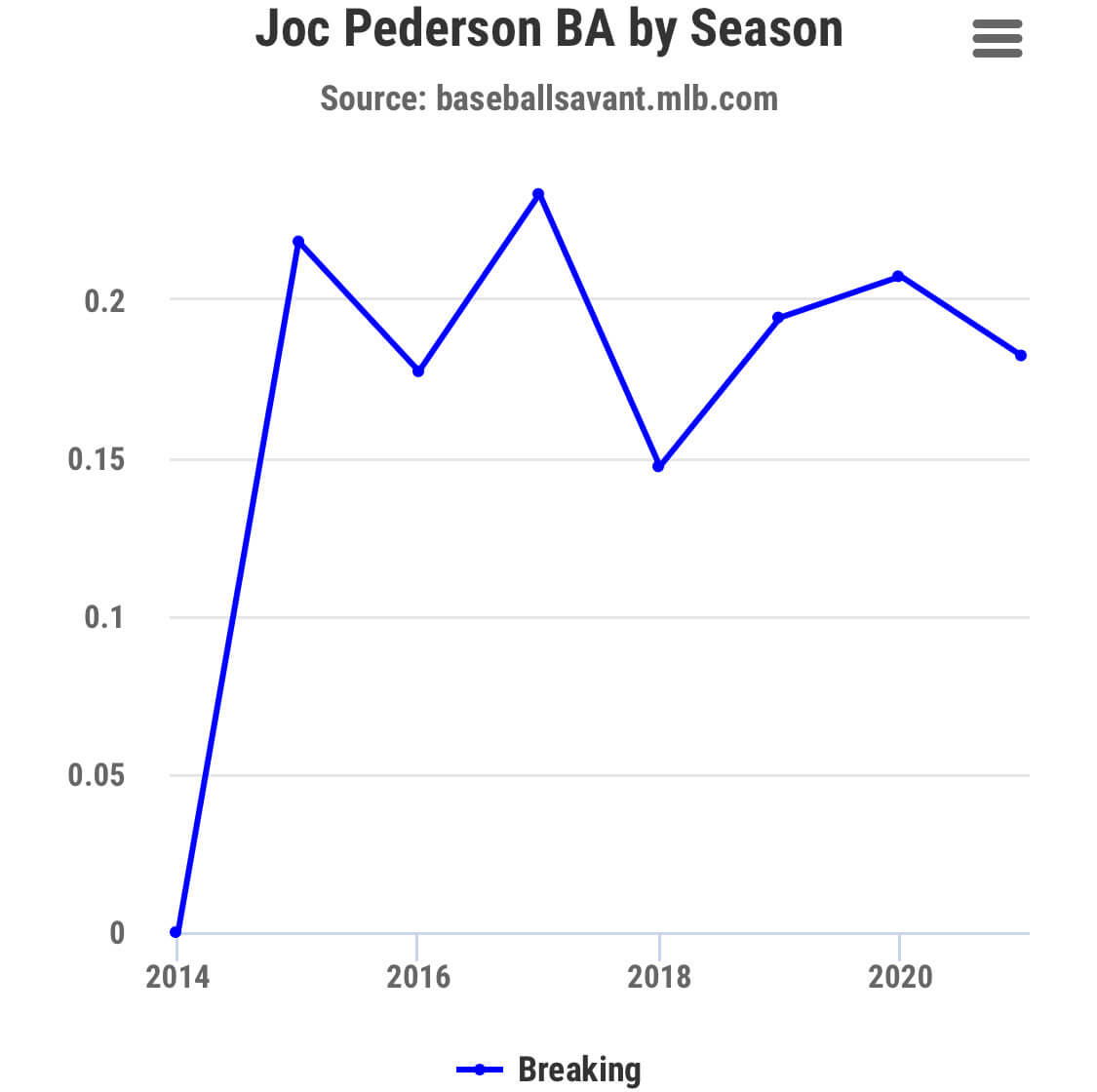 He’s yet to finish with a batting average greater than .249 or have a batting average on balls in play greater than .296. So in all, the holes in Pederson’s profile already make it difficult for him to have a solid batting average. Then when you add in his struggles against LHP, you get the Joc Pederson we’ve come to know and love. So far in 2021, he’s 7/29 against LHP with a 11:1 K:BB. So more of the same, but not terrible results. A larger sample size from this season will help us better understand if left-handed pitchers truly do still have his number.

It’s easy to appreciate McNeil’s game. For starters, he’s a very solid defensive second baseman and a solid defender in general. He has a career .987 fielding percentage at second and is also capable of playing a third and in the outfield. Even though he’s not as strong a defender at third or in the outfield, he does have solid defensive versatility, which helps keep his bat in the lineup on a regular basis.

And you definitely want his bat in the lineup on a regular basis given his rock-solid contact skills. Since his rookie season, he’s yet to have a zone contact% less than 88.8% or a contact percentage less than 81.3%. More than that, he’s also never had a zone swing percentage less than 79.9%. He’s always been a hitter who is aggressive against pitches in the zone and one who’s been able to make contact against a lot of the pitches he swings at in the zone. This mix of aggressiveness and bat control makes it easy to understand why McNeil has had a batting average greater than .310 between 2018-2020.

Well let’s start with analyzing his quality of contact:

His quality of contact wasn’t high-end, but his 13.8-degree average launch angle indicated that he had nice loft in his swing. But even more than that, pulling the ball against RHP seems to be his key to hitting for power. To be specific, 2o of his 23 home runs were pulled in 2019 and 20 of 23 home runs came against a RHP. So in short, McNeil managed to hit 23 home runs in 2019 by having an optimal average launch angle and making an effort to pull the ball when facing right-handed pitchers (37.7% pull vs LHP, 43.3% pull vs RHP). 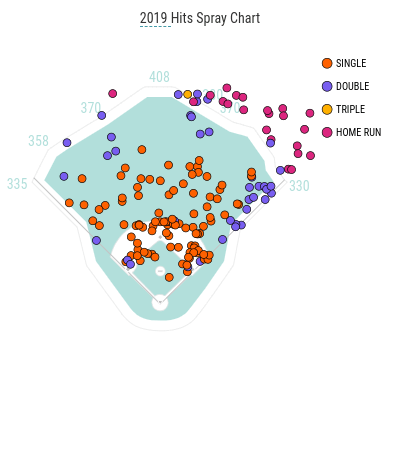 So, if McNeil wants to challenge 20 home runs again using his current skill set, he’s going to need to pull the ball a lot against RHP. He’s currently on the IL with a hamstring strain. But before the injury, McNeil had hit three home runs over 99 at-bats. And yup, you guessed it, all three were pulled. Wow, you guessed it right again, all three came against a RHP. More than that, he was sporting career high quality of contact metrics across the board over his first 90 batted ball events of 2021 (108.3 mph max exit velocity, 5.6% barrel, 36.7% hard-hit rate). Improving his quality of contact will definitely improve his chances of reaching 20 home runs again. However, simply continuing to pull the ball a lot against RHP could also work.