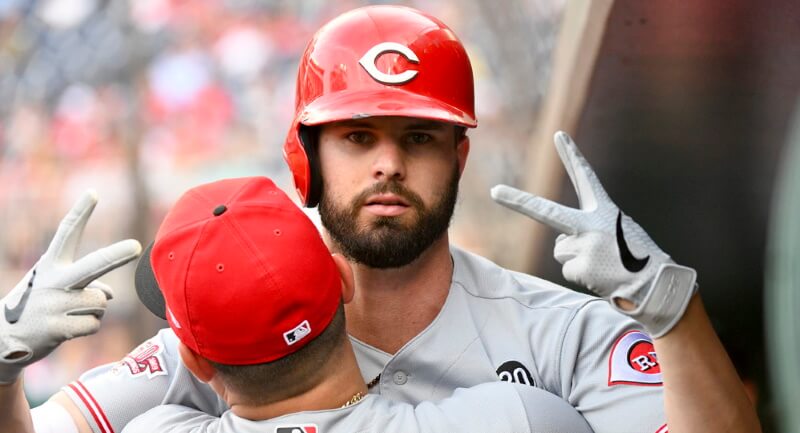 Last week was a brutal reminder of what a frustrating grind it can be to play MLB DFS. Even if you made the right stack and fade calls, there were rainouts everywhere, games postponed after a slate locked, players getting yanked due to a weather delay, lineups and pitchers jumbled due to updated schedules. And that was just Saturday! But those of us who play in the MLB DFS streets know the rules and must embrace the variance and uncertainty. When others see their rosters fall by the wayside when there is late-breaking news or weather issues, us savvy DFS players can use that to our advantage.

As we have seen the past few days, baseball is clearly the hardest daily game to get right. Each individual slate deserves its own individual analysis, especially with so many day games this week. Starting with the Memorial Day main slate, let’s look at what might be signal and what might be noise as we build our rosters.

Cincinnati Reds (vs. PHI) – It’s time to fire up your left-handed Cincinnati bats in the first half of this week in MLB DFS. Sorry, you can’t make it to the party, Joey Votto, but I’m going to go ahead and invite Jesse Winker, Tyler Naquin, and Tucker Barnhart. I hear the party favors the Phillies are giving out are extra-base hits all over Great American Ballpark.

Do I worry a little about Aaron Nola on Tuesday? Perhaps, but his fastball ranks as only the 27th-best and his curveball as 23rd-best, according to Fangraphs’ pitch value grades. Consider also Nola’s splits against handedness this year:

From this, we can easily fade right-handers against Nola, but stacking left-handed batters looks pretty enticing right now.

The other pitchers going for Philadelphia in this series – Spencer Howard and Vincent Velasquez – should also be in for a rude awakening as they enter the ballpark with the second-highest park factor for home runs the last three years. Winker is going to require you to pay up (over $4,000 on both DraftKings and FanDuel on Monday), but other bats you want are very reasonable to start the week and make a nice primary stack considering this game has an implied total of nine runs.

Atlanta Braves (vs. WSH) – I am going to have to respectfully disagree with my esteemed colleague Ahaan Rungta, who called the Braves a fade in his Week 9 hitting planner. I am keying in on three games in particular in the upcoming four-game set where I will be loading up the stacks of Braves – pairing expensive bats with cheaper pieces depending on the handedness.

If there were no other reason, the fact that the Braves miss Max Scherzer this week is enough to make us look their way. But the Braves get four home games against some pretty mediocre arms which can be a potent combination for offensive production.

Truist Park has the second-best offensive park factor in the past three years behind only Coors Field and is equally generous to batters from both sides of the plate (both sides have a top-five offensive park factor). The Braves will get the full spectrum in the series when they see two righties in Joe Ross and Stephen Strasburg (look at players like Ozzie Albies and Ehire Adrianza, both under $3,200 against Ross on FanDuel Monday) and two lefties in Patrick Corbin and Jon Lester (fire up guys like Austin Riley and William Contreras).

New York Yankees (vs. TBR) – Somehow, the Tampa Bay Rays have developed one of the most lethal one-two pitching combos in the league. While Tyler Glasnow is off doing his best 1999 Pedro Martinez impression, Rich Hill has been channeling his inner 2004 Randy Johnson or 2004 Roger Clemens. Hill is an old man who just strikes out everyone now.

The Yankees will see them in the first two games of the series and then will close out with uber-talented rookie Shane McClanahan. All McClanahan has done in his first six starts is give us a 3.29 ERA, 2.98 FIP, and 10.54 K/9. All while skipping AAA altogether.

For as explosive as this Yankees offense was predicted to be this season, they rank only 18th in OPS (.690) and 16th in wOBA (.307) in 2021. The Bronx non-Bombers are middle of the pack against both righties and lefties this year so there is not much window of opportunity here I can see. The Yankees are likely to be a three-day fade for me.

St. Louis Cardinals (@LAD) – One of the themes I expect to eventually develop in this column is that we just don’t want to risk our precious offensive roster spots against Dodgers pitchers. The Cardinals bats will be no exception this week especially as they tumble down the park factor rankings with a trip to Dodger Stadium.

What we know: Trevor Bauer and Walker Buehler will pitch the first and third games of the series. No reason to waste digital ink on these guys; they both rank top-30 in FIP, SIERA, and K%. What we don’t know: Who will pitch game 2 of the series. But the Dodgers bullpen holds an ERA under 3.90 and a WHIP of 1.34, so even if they go straight bullpen that day, the Cardinals are essentially facing the equivalent of Zach Greinke.

As much as I love value options like Tyler O’Neill and Dylan Carlson in the right DFS situation, this looks a series where we can safely fade the Cardinal bats.

New York Mets (@ARI) – “Wow, really superb analysis recommending Jacob DeGrom after he was rained out from a start against the Braves and now gets the Diamondbacks!” Listen, online troll, this is much more about just locking in DeGrom in this series. Also weighing heavily here is the ineptitude of the Arizona offense despite recent additions, as well as the fact that the Diamondbacks will likely not get to tee off against Joey Lucchesi this week.

The Diamondbacks are bottom-10 in overall contact% as well (74.6%) and now face DeGrom (freak of nature), Marcus Stroman (unhittable sinker), and David Peterson (top-35 pitcher in zone contact%), who all miss bats or induce weak contact with regularity. If we could create a pitcher stack for the first half of the week, this might be our best choice after the Dodgers and Rays.

Minnesota Twins (@BAL) – Unlike what the Kansas City Royals got this weekend, the Orioles will see the good 40% of the Twins rotation Monday and Tuesday, which – even in Baltim0re – should make scoring runs in bunches a tall task.

Both Jose Berrios and Michael Pineda rank top 35 this year in K% among all starters with at least 40 innings pitched. This should theoretically lead to strong fantasy starts since they face an Orioles offense that owns the seventh-lowest BB/K rate this season and the fourth-highest swinging strike%.

Randy Dobnak is probably nothing more than a cheap dart throw on the Wednesday slate, but I feel comfortable deploying both Berrios and Pineda as SP2 options in the first two games.

Seattle Mariners (vs. OAK) – In the second half of last week, the Mariners’ starters were a strong buy in this piece against the lowly Texas Rangers. In those three games, the Seattle starters delivered 17.1 IP and only allowed a total of five earned runs. But this matchup against Oakland is going to be a whole different animal, leading me to fade the M’s arms the next three days.

As has seemingly been the case since the Moneyball days of Johnny Damon, Jason Giambi and Scott Hatteberg, the Athletics are still in the top 12 in MLB in BB%, BB/K, and wRC+ in 2021. This year, they have followed the MLB trend of increased flyballs and rank third in flyball rate at 40%, leading to the seventh-most home runs in the majors.

Soft-tossers like Marco Gonzales and Chris Flexen are press-the-X-button fades for me over the next three days against one of the toughest offenses to pitch through.