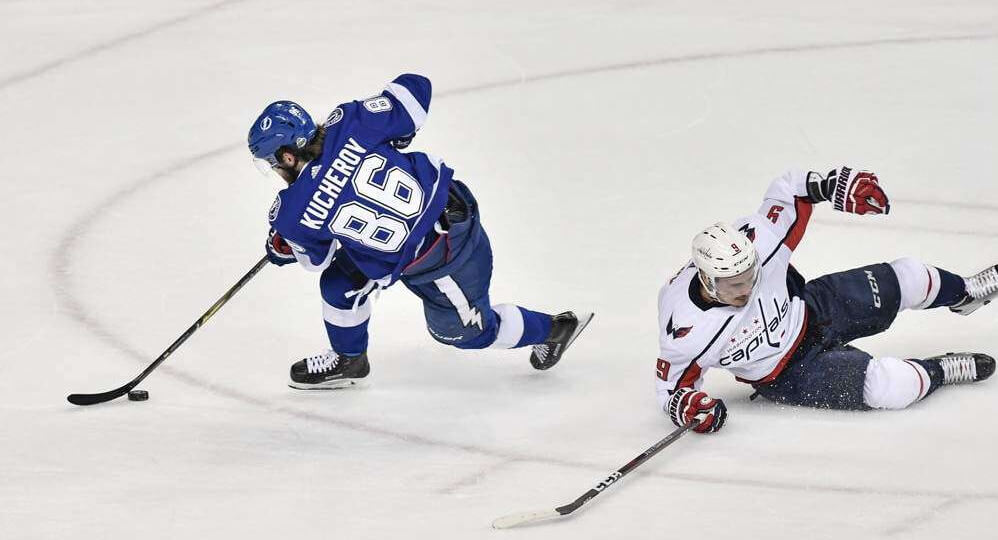 Statistically speaking, there are more forwards in the NHL than in any other position. You’ll also be drafting forwards the most in your fantasy hockey leagues.

In my fantasy hockey league experience, I find this is the position where you can find the most hidden gems. There are always players who break out, exceed expectations, or stay healthy for the first time in their careers.

Before we get into that, we need to establish a solid forward core. A foundation for success to win your league of players you can rely on night after night. Our 2021 fantasy hockey forward rankings can help guide you towards league-winning stability.

The names you’d expect at the top… with a bit of variance.

It’s no surprise that Connor McDavid tops our forward rankings. It’s also no surprise to see the likes of Nathan MacKinnon, Leon Draisaitl, Auston Matthews, or the now healthy Nikita Kucherov rounding out the top five. Those are all extremely safe bets. You can’t go wrong.

After those five players, you start to see a bit of variance. Jesse Severe is a little lower on Artemi Panarin than the rest. Victor Nuno has Mikko Rantanen in the bottom half of the top 20. I disagreed with both of them on those ranks. Panarin was on a 113 point pace last season prorated over a full 82 games and only missed time due to a bizarre 9-game stretch after his political comments towards Russia. I can’t see that freak incident happening again. Artemi Panarin is just as safe as the top five above.

As for Mikko Rantanen, it feels to me that there are fewer right-wingers than left-wingers or centres at the top of the draft. This could give you a positional advantage if you take one of the truly elite ones high. Rantanen was on a 104-point pace prorated to 82 games. More importantly, he was on a 48-goal pace. That puts him right up there with David Pastrnak in that department, but with the added bonus of riding shotgun with Nathan MacKinnon all season long. Rantanen and Pastrnak were also essentially equal in shots, and if you’re worried about Rantanen’s shooting percentage, it fell in line with his normal yearly totals in a consistent pattern. Considering Colorado’s top line is still intact, feel free to take Rantanen as a top 10 pick without looking back.

Considering RW scarcity, it shouldn’t come as a surprise that I rated Mitch Marner the highest among all rankers, as well as Mark Stone and Brock Boeser.

That one player who doesn’t seem like they deserve the rank, but look at the stats…

Brady Tkachuk doesn’t really strike you as a top-15 fantasy name, but he should. If you’re just in a league with goals and assists, lower him a lot. Tkachuk’s value comes from how beastly he is in the shots on goal and hits department. Tkachuk finished 2nd in the league in shots on goal and 1st among all forwards in hits. It’s a cheat code. I probably didn’t rank him high enough honestly.

I get it. Point’s stats are quite underwhelming in the regular season during the last two years considering his status as Tampa Bay’s number one center. He doesn’t shoot the puck as much as you’d like. He’s not even a point-per-game player lately during the season.

I have a gut feeling his performance this season will be closer to his 2018-19 season where he scored 41 goals, 92 points, and a whopping 20 power-play goals. His running mate Nikita Kucherov missed the entire season last year, so he has that back. The loss of Tampa’s shutdown line of Goodrow-Gourde-Coleman may mean more heavy leaning on the Lightning power-play and bigger weapons. We know he’s getting paid a ton next offseason, but the contract year is another incentive to explode. I’m clearly the outlier by ranking Point in my top 10, but I have an electric feel (MGMT reference!) that Point has a huge season.

Here are some other interesting observations I found on the list:

Jesse is the highest on Roope Hintz. I don’t blame him. If Hintz stays fully healthy, he was a point-per-game player last year. My question with him is if he can continue producing at elite rates with Tyler Seguin back in the fold. I think he can – but based on our rankings, Victor sees a drop-off ahead. He ranked Seguin at 33 and Hintz at 88.

Another place where Jesse and Victor disagreed? Jack Eichel, with Victor ranking him at 28 and Jesse ranking him at 70. I think Eichel at the moment is a very ballsy pick. We have no idea where he is playing next season, or even IF he is playing. I ranked him at 43 still because he’s such an elite talent that he’s eventually worth the gamble. In a keeper league, he’s a no-brainer hold. If Eichel is ready to play game one of the season and finds himself on a new team, he could explode.

Victor thinks a big bounce-back season is in store for Evgeny Kuznetsov, ranking him at 45. Everyone else believes Kuznetsov will remain enigmatic, all ranking him around 100 or so.

Ian Whamond and I both had Nazem Kadri in our top 100. He shoots the puck a lot and after what happened with his suspension in the playoffs, I see him coming out motivated.

Ian Whamond sees Josh Norris having a large breakout season, ranking him at 54. The next highest rank for him was 82nd by Victor.

I was the only person to rank Pavel Buchnevich in the top 50. Are none of the other rankers paying attention? Not only was Buchnevich close to a point-per-game last season, but he’s also a huge focal point of the Blues offense going forward. The next highest ranker had him at 80. He’s also a right wing, which I find more scarce. Speaking of players I was higher on than the others…

Players I am higher on than the others

Anthony Mantha, who I think will shoot a ton and score a bunch in Washington as he gets acclimated with his newer team. Zach Hyman, who gets the Connor McDavid linemate bump. Teuvo Teravainen, a dual-wing eligibility player that people are sleeping on as a consistent assist & plus-minus collector. Andrew Mangiapane, a player who impresses me at every turn and has the right opportunity to break out with Calgary needing offense badly this season. Conor Garland, a guy who produced a lot in Arizona with nobody and now gets a ton of somebodies to play with. Timo Meier, a multi-category player who likes to shoot, hit and is at the age to rebound on the stat sheet.

Joel Farabee & Travis Konecny, two younger Flyers who will take the reigns as the offensive drivers in Philadelphia with Jakub Voracek gone and Claude Giroux aging. I also almost put Matt Barzal in the top 20, as I do think the playoffs showed some of his best hockey and Barry Trotz will have to let him fly more often because of it.

Jesse did not rank Evander Kane. He didn’t want to deal with the off-ice mess and issues around Kane.

I did not rank Alexis Lafreniere. I think we’ll see good improvement out of him this season, but there’s still a lot of wingers to feed on the Rangers for me to confidently say he’s a top 100 fantasy forward.

Victor and Ian had Patrik Laine with a big rebound around the 50 rank mark. Jesse and I think Laine won’t get back to the big numbers quite yet.

Victor sees Mike Hoffman having a big season in Montreal, ranking him at 45.

Jesse and Ian see Cole Caufield exploding after his nice playoff run, both ranking him around 50 and in Jesse’s case, higher. Victor and I are more skeptical, ranking him in the high 100s.

Did you enjoy our 2021-22 Fantasy Hockey Forward Rankings? Then you’ll definitely want to check out our 2021 Fantasy Hockey Draft Kit. New content is added every day.