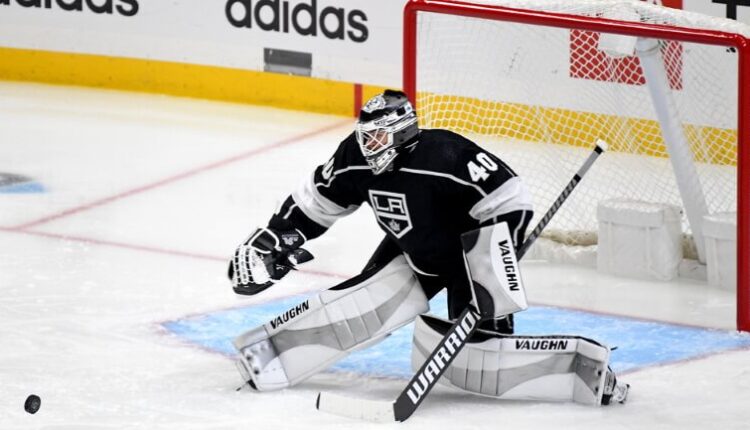 Finding the perfect sleeper in later rounds and hitting on them is often the difference between winning and losing in fantasy hockey. With goalies, that’s no different. Let’s take a look at five goalie sleepers that could pay off big during the 2021-22 fantasy hockey season.

46/40, 41/31, and 24/19, the Bruins games started splits between Tuukka Rask and Jaroslav Halak in each of the previous three seasons. Now, of course, Halak is in Vancouver, while Rask remains an unrestricted free agent as he recovers from off-season hip surgery.

During the summer, the Bruins signed Ullmark to a four-year contract to split starts with rookie Jeremy Swayman who was mighty impressive in 10 starts last season.

It’s expected that Ullmark and Swayman will see a similar game plan when it comes to starts, mirroring what the Bruins have done in years past. Coming to Boston from Buffalo, Ullmark wasn’t on many fantasy hockey radars in large part due to a poor Sabres team in front of him. But with the change of scenery for Ullmark, more success should be on the horizon.

Injuries were an issue for Ullmark last season, limiting him to just 20 games. In those 20 games, Ullmark went 9-6-3 with a .917 save percentage and a 2.63 goals-against average.

The Florida Panthers are home to hockey’s second-highest paid goalie in Sergei Bobrovsky, but that shouldn’t steer you away from Spencer Knight. With Bobrovsky’s $10 million price tag, it’s likely he will be given the first crack at the Panthers’ starting gig. But Bobrovsky is coming off another disappointing season in Florida, one that saw him a healthy scratch in the playoffs.

Even if Bobrovsky bounces back to anything resembling the Bobrovsky we saw in Columbus, Knight still has the potential to bring a positive impact to your fantasy team.

The 20-year-old Knight made four appearances for the Panthers a season ago, two more in the playoffs. When his name was called upon, Knight certainly looked ready for the part and should continue to develop his game at the professional level in a big way in 2021-22.

The Kings are filled with youth and potential and that’s what makes Petersen such an interesting target in this year’s drafts. Petersen was solid for most of the season in 2020-21, appearing in 35 games, seemingly taking the keys to the car from veteran Jonathan Quick. The Kings were not particularly great last season which makes Petersen’s numbers less attractive and tells a different story of what the eye test does.

While the two should see a healthy dose of a 1A/1B platoon, Petersen is undoubtedly the goalie to own in Los Angeles. The Kings are likely a year or two away from being serious contenders once again, but that doesn’t mean Petersen won’t put up solid numbers, increasing his fantasy hockey value and making him a key sleeper.

Petersen is especially valuable in salary cap leagues, entering the season on the final year of his entry-level contract with an annual cap hit of $858,333.

Kahkonen looks ready to take on a bigger role this season, and with that, the potential to be a valuable late-round sleeper for you. Last season, Kahkonen had stretches where he looked like he was ready to run away with the Wild’s starting gig,—including nine straight wins from February to late March, only to hit a wall and get himself pushed back to the backup role.

Kahkonen’s competition in net remains Cam Talbot who really struggled down the stretch last season and at 34 years old, is unlikely to bounce back and outplay Kahkonen from the start.

The two will likely start the season with a near 50/50 split in net, but it’s hard to see Kahkonen not advancing past Talbot in the race, ultimately being the go-to goalie in Minnesota by mid-season.

Former starter Philipp Grubauer signed with the Seattle Kraken, forcing the Avalanche to bring in Darcy Kuemper to take over as the lead horse. But Kuemper too has had issues staying on the ice in years past, and should that trend continue in 2020-21, the door could open for Francouz, leading to more starts.

Even if Kuemper stays healthy and plays as well as he is expected to on a talented Avalanche team, Francouz will be given plenty of opportunity to show where his game is at post-injury.

If Francouz can bounce back to the goalie he was in 2019-20, the Avalanche will have no choice but to give Francouz more playing time, making him a sneaky option for you.

Are you on board with Anthony’s goalie sleepers? Then you’ll definitely want to check out our 2021 Fantasy Hockey Draft Kit. New content is added every day.