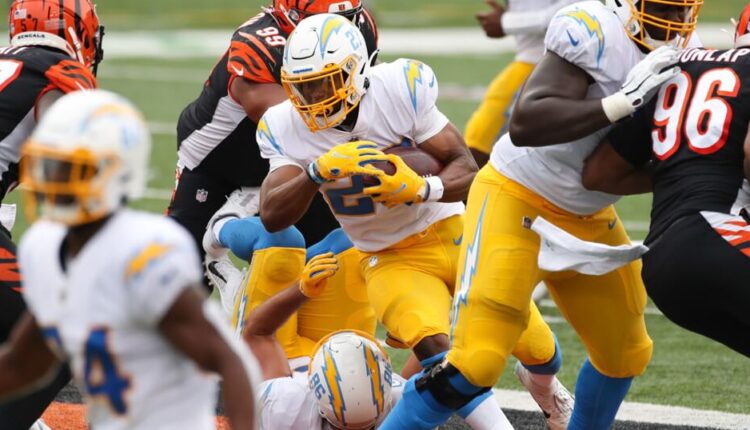 We’re past the first quarter of the 2020 fantasy football season. Some of us are in panic mode, some of us are dreaming playoffs, and some of us can sneak into the playoff picture with a couple of really slick decisions. Today, we’re here to help you with just that, in my Week 5 Loves & Hates, where we highlight players you should expect big things from or disappointments from. Expect this section to help you make start/sit decisions or make a daily fantasy lineup; this isn’t the place for your standard “Dalvin Cook is probably going to be good” or “Ross Dwelley shouldn’t be your TE1” talk. You get the concept, let’s get this bread.

I’m just going to be frank. The Cowboys defense sucks. The fans want defensive coordinator Mike Nolan booted. It’s also partially a personnel problem with how beaten up they are, but this is a historical level of incompetence. A waste of an MVP-caliber Dak Prescott so far, the Cowboys defense is hideous in pretty much any metric you can use, defending the pass or the run. They allow more big plays in a quarter than they would like to in a season and are the fourth worst fantasy defense against quarterbacks this season. The beneficiary this week from the Cowboys disaster? It has to be Daniel Jones. While 2 touchdowns, 7 turnovers on the season sound like droppable numbers, it’s not about what Jones did for you (or someone else who dropped him), it’s about how you can reap a 25-point upside for him in Week 4.

The Giants haven’t done much correctly in their 0-4 season start but if there’s something that they thought might give them some relief, it was going to be the running game. Instead, Saquon Barkley was unproductive in Week 1 and injured for the season in Week 2. They then turned to a platoon of Wayne Gallman, Dion Lewis, and Devonta Freeman at the position, who have combined for 1 touchdown and very few sparks in productivity to be excited about. In fact, in Week 3, the Giants ran the ball with 5 different men and 25% of the carries and 33% of the rushing yardage came from Daniel Jones himself.

Jason Garrett, set to face his former organization, is going to let Daniel Jones rip it and if you need a cheap play at QB, so should you.

The Philadelphia Eagles, finally having won a game, sit atop the laughably painful NFC East. They did so on the back of some big late-game plays by their defense and their quarterback, but don’t be fooled. Despite the 49ers being banged up on both sides of the ball, they kept the game interesting and part of that is due to the lack of beauty in the Eagles offense. You can argue all you want about whether the reason is a lack of weapons or not, but Wentz has not been consistent with his decision-making. He used his athletic ability to pass on the run to his advantage but in Week 5, he’s set to face a daunting Pittsburgh Steelers, a menace from a fantasy perspective.

The Pittsburgh Steelers defense is legit. This season, they have allowed a mere 59.8% completion rate to quarterbacks (third-lowest in the NFL), have sacked the quarterback 15 times (second in the NFL despite just the three games), and have hit the quarterback 39 times (also second in the NFL). They also are the runaway #1 team in the NFL in QB pressure percentage. Set to face an Eagles offense that is mediocre at avoiding pressure and has gotten sacked 14 times (tied for third in the NFL), I expect Wentz to be in panic mode from his first snap. To add to the burden for Wentz’s fantasy owners, Pittsburgh’s offense is fourth in the NFL in average time of possession. If you’re running Wentz out in your lineup, you better hope that the Steelers offense makes it ugly early and Wentz’s passing volume is forced to get him some garbage-time points for your team. But if you don’t want that risk, look at other options at QB.

An 80th percentile 40-yard dash, better than Alvin Kamara. A 77th percentile speed score, better than Christian McCaffrey. A 68th percentile agility score and 74th percentile bench press, both better than Dalvin Cook and Derrick Henry. Workout metrics are far from perfect, but it’s clear that Joshua Kelley does not lack talent. Now, with starting running back Austin Ekeler out for several weeks, Kelley will have no shortage of opportunity. If you’re worried about splits with Justin Jackson, let me remind you that in Week 4, Jackson saw 9 fewer snaps and on the season, Jackson has a total of 25 scrimmage yards and 1.6 yards per rush in his 2 games.

Chargers’ RB Austin Ekeler is expected to be sidelined 4-6 weeks with a hamstring injury and a hyperextended knee, per source. Ekeler now seeking a second opinion on his injuries and timeline.

Meanwhile, in Kelley’s first two weeks, he got 35 carries and 173 scrimmage yards and on the season, Kelley is averaging 3.3 yards per carry — all that with Ekeler around. Kelley is the clear RB1 on the team and as long as he can keep the ball secure, he can immediately slot into a FLEX role or, in some cases, as an RB2.

Moral of the story? If you’re in a FAAB league, I implore you not to shell out on dangerously hot commodity Justin Jackson; instead, slot Joshua Kelley and his tempting matchups coming up, not just in Week 5 against the mediocre run defense in the New Orleans Saints. This was a PSA. You’re welcome.

The Cleveland Browns lead the NFL in takeaways and fumbles forced and are top 5 in the NFL in fewest rushing yards allowed. In what I envision to be a close game in Cleveland with the potent defenses facing off, Taylor is going to have to feed off of touchdown production to be fantasy-relevant because volume alone is not going to be enough to scare the Browns.

In 2020, Taylor has provided little value in PPR, with Week 1 being his only game with more than 2 catches, and in a standard scoring format, his two games without finding the endzone has totaled only 16.8 fantasy points. In smaller leagues and daily lineups, turn to resources other than the rookie from Wisconsin.

The Robby Anderson redemption story has given me happiness. The matchup for him this week should give his fantasy football owners even more reason to be happy. The Atlanta Falcons are the fourth-worst defense in yards per passing attempt given up and have given up more pass plays of 20+ yards than any other team in the NFL. It doesn’t help them that their defensive unit just keeps getting battered with injuries. As a result, say hello to one of the best big-play speedsters in the NFL who just didn’t get his shot at greatness with Sam Darnold.

Anderson has produced at an elite level in 3 of his four games and even though he has visited the endzone only once this season, he is still a top 10 wide receiver. He catches 82% of his targets from Bridgewater and with the opportunity to couple opportunity with a differential in talent, Anderson has upside to a top wide receiver again this week. Smash that value because the upside is through the roof.

Only 3 NFL teams have allowed fewer passing touchdowns than the Los Angeles Rams. While Terry McLaurin‘s volume stats explain his appearance as the WR10 in PPR scoring, he relies heavily on the deep ball. Only 6 NFL teams allow a lower average depth of target than the Los Angeles Rams. McLaurin is simply facing an unfortunate matchup here and if he doesn’t find the endzone, he has the potential to have his worst week of the young NFL season this Sunday.

His quarterback is not expected to be of much help either; Haskins has turned the ball over 5 times in 4 games and the Rams have forced 6 turnovers, all in the last 3 games. Poor Terry might not even get a chance to be on the field long enough in Week 5 to amass enough volume to be fantasy-relevant. Terrible value all around, especially if you can get cheaper options in a daily lineup — like Robby Anderson.

That’s a name I haven’t uttered in quite a while, and for good reason. 11 catches for a total of 74 yards with no endzone dances isn’t a statline fantasy owners are salivating at; in fact, Herndon’s own percentages suggest he might just be sitting on waivers for you to pick up for his best fantasy performance in 2020; i.e. Week 5. With Sam Darnold likely out at quarterback for the Jets and Joe Flacco to replace him, an already tiresome Jets offense gets a new twist. But for Herndon, the twist is trending in his direction. In Joe Flacco’s long-storied Ravens career, a tight end led the team in targets twice. It’s simple — Flacco likes his tight ends.

Combine that with the oh-so-tempting matchup of the Arizona Cardinals who would rather forfeit their season than defend the tight end well and you have yourself upside galore with Herndon. Pick him up if you are desperate for a tight end, reap his spike in Week 5, and then never use him again. Or just play him in your daily lineup to secure the bag elsewhere.

Are we going to keep acting like Gesicki is here to stay as a rising star at tight end? If you understand that the answer is no, move on and make sure you don’t get obsessed with the Dolphins’ endzone threat. In 3 of his four games this year, Gesicki was targeted less than 6 times and in those 3 games, he caught a total of 5 passes. Despite his average catch being nearly 15 yards and finding the endzone a couple of times, Gesicki is still outside the top 10 as a fantasy tight end. Facing a 49ers defense that is the third-best against the tight end position in 2020, Gesicki will need a score or two just to be relevant at all, so just stay away if you can and don’t fall prey to the boom potential he’s displayed early this year.

Which surprise players are you sitting in Week 5? Who do you love? Which of my picks were complete misses? Got any bold predictions about star busts or late-round boomers this week? Share them in the comments below!

Like Ahaan’s Week 5 Loves and Hates? Check out the rest of our Week 5 Fantasy Football lineup!