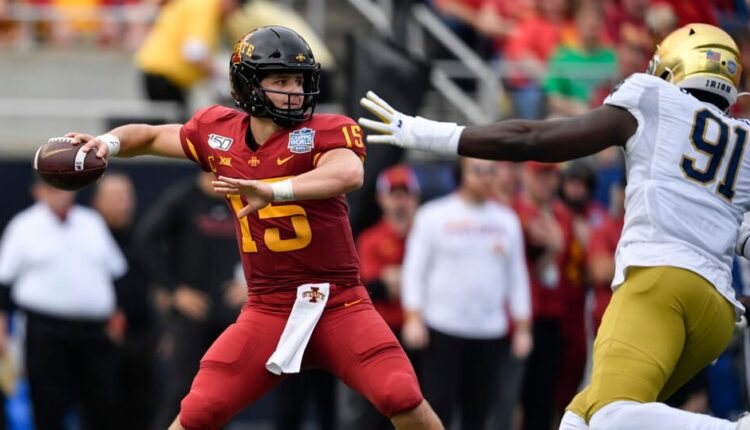 2020 seems to be the year of the CFF Mock Draft. The lack of Spring games has us taking gambits on interesting players that we likely would have waited on if a Spring game hurt their stock. I’ve noticed some things here and there and am willing to share my own personal observations with you guys. If the Mock Drafts continue to roll through I will continue to update my observations. Enjoy.

Ready to make the jump into College Fantasy Football? Head over to Fantrax and join a league today!

Quarterback is Deep But Risky

The talent at quarterback is certainly there but the trust isn’t. Outside of Sam Howell, Justin Fields, Trevor Lawrence, Brock Purdy, Spencer Rattler, and Sam Ehlinger, it’s anyone’s guess as to how well the guys perform this year. Jamie Newman and D’Eriq King are studs, but are they the same player with their new destinations? Kellen Mond, Kedon Slovis, Micale Cunningham, Cammon Cooper, and John Rhys Plumlee are all excellent players but there is a chance that none of the four start week one. And guys like Zac Thomas, Chris Reynolds, and Ian Book are safe bets but they aren’t going to produce more than 20 points per game (Book is around 25) and won’t carry you to a championship. Waiting on a quarterback is fine but you do risk missing an awful lot after those six players.

Running Back is Loaded

One position you can wait on this year is running back. Jermar Jefferson is a sixth-rounder, Rakeem Boyd and Zamir White are ninth-rounders, and Shamari Brooks is likely to go undrafted all together in most leagues. I’ve learned that if you can’t get Etienne, Patterson, Hubbard, or Gainwell don’t fret. You can load up on that later, go get you a wide receiver.

Wide Receiver is extremely top-heavy this year. It’s so top-heavy that you have to draft a receiver in the first two rounds or you lose out on a whole tier of receiving talent. The drop off after Ja’Marr Chase, Sage Surratt, Reggie Roberson, Jonathan Adams Jr., Marquez Stephenson, Rashod Bateman, DeVonta Smith, Justyn Ross, Tylan Wallace, and Tutu Atwell, and Rondale Moore is immense. I’m not saying you should use your top pick on one but for sure use a second-rounder on one. The margin for error at the receiver position is huge this season.

Tight End Is a One Horse Race So Don’t Overspend

This is coming from the biggest tight end overspender of all time. I’ve reached for guys every year I’ve played because I wanted the Jaylen Samuels’ or Albert O’s of the CFF world. This season, the only tight end worth going for early is Kylen Granson and I’ve never worried about snagging him. Get you a better player at a different position and then late in the draft go get Payne Durham of Purdue or Braden Galloway from Clemson. If you miss on both of those guys then hit up the waiver wire.

The Most Overspent On Players Of 2020 So Far

The three players I’m seeing who are most guilty of this moniker are D’Eriq King, Micale Cunningham, and Isaiah Spiller. I’ve only seen D’Eriq King exit the second round undrafted one time. The potential of King is there but I’d argue that Newman has similar potential to King and just as much risk and is going two rounds later. My rule of thumb is that King shouldn’t be drafted before the third round and if he falls that far he’s good to go.

Isaiah Spiller is a player I have yet to be sold on or have any interest in drafting this season. My friend Nate Marchese had an excellent tweet about Spiller a few weeks ago that you can find below that only sold me more on my skeptic view of Isaiah Spiller. 46% of his production on the ground last season came against Lamar, Texas State, and UTSA and he achieved a combined 124 yards against Clemson, Alabama, Georgia, and LSU. He’s going off the board before the notable names below.

Micale Cunningham is another I’ve seen flying off of boards early. I’m not saying I don’t get it system-wise, I just don’t think he’s a safe bet. Cunningham did have excellent games against Syracuse and NC State and has value as a runner but that quarterback room is no less crowded than it was last year. Puma Pass, who began last year as the starter, is still on campus looking to compete after a successful start to the season and Evan Conley replace Cunningham admirably against Wake Forest and Miami. Players like Sam Hartman, Chevan Cordeiro, Adrian Martinez, and Ian Book are far cheaper and are entrenched as the starter. Don’t drop a fifth-rounder on Cunningham, use it on a different position and capitalize on someone else later.

A lack of Spring game and Oklahoma’s addition of multiple transfer-receivers has everyone up in the air about who “the guy” is for this season. Right now the receivers are going off the board in this order; Jadon Haselwood, Charleston Rambo, Obi Obiali, Theo Wease. While Haselwood and Rambo are the two earliest, It is unsure of how much the Sooners trust them given that they brought in Theo Howard and immediately after Obi Obialo. While Haselwood’s risk is high, Rambo is a safe gamble because even if he is not the No. 1 guy he’s a trustworthy player. I personally have only targetted Rambo but I understand the reasoning for any of the others.

I point this out because even though he has a well-noted Achilles injury he’s still going completely undrafted in most leagues. The Ohio State attention is more directed at Oklahoma-transfer Trey Sermon but a random risk taken now on Teague could pay off dividends. The Buckeye’s have successfully utilized to fantasy-relevant backs in the past. You could spend your final pick on Teague in every draft and luck up with a thousand-yard rusher. Worst case scenario you drop him and pick up the other guy you’d want.

Brock Purdy Is Now A Fourth-Rounder

Brock Purdy is an excellent playmaker and is one of my favorite quarterbacks to watch in all of college football. He’s also one of the safer quarterback options in the CFF world and he’s going in the fourth round or later. Purdy averages 23 points per game and the talent around him is only getting better with Matt Campell’s recruiting and the emergence of Breece Hall. Why take a guy like KJ Costello when you can have some of the best players on the board and cap it off with Brock Purdy. Seem’s like a great deal to me.

There are some guys going incredibly late that could play huge this year. Essentially you could draft these guys in the final rounds and worst-case scenario you drop him. Players like Western Michigan’s Skyy Moore, FAU’s BJ Emmons, and Minnesota’s Chris Autman-Bell are all falling down draft boards. Guys like this could win you a championship if they are used right. If they don’t pan out you don’t have to worry about who you could’ve had. Just hit up the waiver wire.

More Guys That Fit the Bill