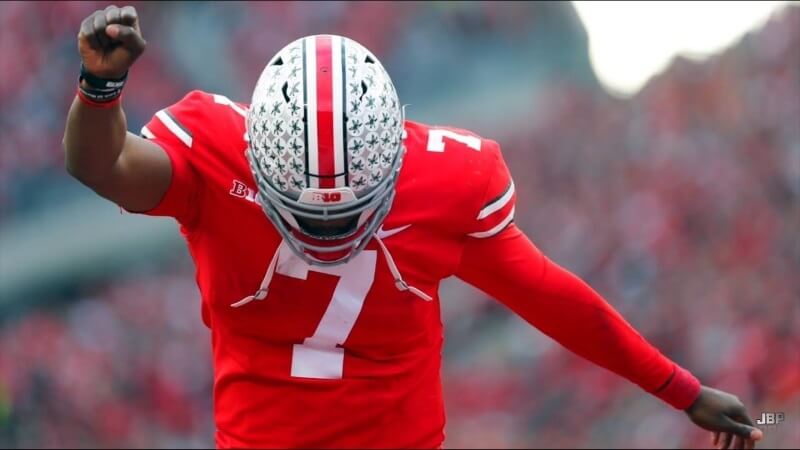 On Wednesday, March 20, Ohio State University held its pro day in Columbus. And while there were a number of highly-touted prospects in attendance, the day belonged to quarterback Dwayne Haskins.

After reports earlier in the week that the New York Giants weren’t especially interested Haskins, a 6’3″, 231-pounder who passed for  4,831 yards and 50 touchdowns with eight interceptions for the Buckeyes in 2018, the Giants sent a full complement of coaches and scouts to both meet with Haskins and watch him work out. Per Paul Schwartz of the New York Post, Giants head coach Pat Shurmur came away impressed by both Haskins’ ability and composure.

“He’s an impressive young man,’’ Shurmur said. “It was excellent. We obviously have spent a lot of time evaluating him, and this is one piece of it. We got the chance to work with him on the board and take him to dinner, and he certainly is an accomplished and impressive young man.’’

As Matt Lombardo reported for NJ.com, Haskins’ workout also impressed the NFL Network’s Daniel Jeremiah—for the most part. “When he escapes pressure and gets off to his right, Dwayne Haskins was money,” Jeremiah said during the telecast. “When he was rolled to his left, his accuracy would leave him. Today, he throws a beautiful ball rolling to his left.”

“I also want to see how quick and sudden he is with his footwork. They’ve tried to feature that with a variety of footwork on display, different drops, play-actions, tucking his shoulder and moving suddenly. He’s done a nice job of that. His anticipating really stood out to me.”

That assessment jibes mostly with the scouting report offered by Kyle Crabbs of the Draft Network, who called Haskins a pure pocket passer who needs to work on his footwork and facing pressure after just one season as the starter in Columbus.

“Haskins projects as a prototypical pocket passer in the NFL,” Crabbs said. “Haskins’ best system fit is an offense that implements a lot of work in the intermediate areas of the field to capitalize on his accuracy to that area and mitigate his longer drops and prolonged reps holding the ball within the pocket. Haskins’ ceiling will be determined by how much more accurate he can get with his deep ball and getting his decision-making process to speed up. He is not overly effective beating pressure.”

Dwayne Haskins is a Pure Pocket Passer – an Old-School QB

Chris Trapasso of CBS Sports likened Haskins to Drew Bledsoe—for better or worse. “When I think of “pure” pocket passers — and in this case that comes with a touch of a negative connotation denoting a serious lack of mobility — Drew Bledsoe is one of the first quarterbacks who comes to my mind,” Trapasso said. “Bledsoe was statuesque in the pocket; he just wanted to live there and fire rockets all over the field. Yes, there was an occasional step up away from pressure, but most often Bledsoe either delivered the football from inside the pocket or was hit or sacked inside the pocket. I see a lot of that with Haskins, a slow-footed, pure pocket passer. He’s a little more athletic than Bledsoe was, but Bledsoe had a stronger arm. I wasn’t scouting Bledsoe when he was a prospect in 1993. I was scouting bad guys Power Rangers had to fight. But I do have vivid memories of Bledsoe in the NFL. Dwayne Haskins can read the entire field, is mostly accurate, and wants to set up shop between the tackles on every snap. If protected well, he can be an awesome quarterback in the NFL. Like with Bledsoe, I’m worried about Haskins when he faces pressure.”

As someone who watched every snap of every game in which Haskins played, I agree with most of this. Give Haskins a clean pocket and a little time to deliver the football, and he’ll pick defenses apart—especially with intermediate throws. His arm talent isn’t in question even a little. But get in his face, and Haskins’ lack of mobility becomes an issue. And while Haskins didn’t make many mistakes with the football, there were times when he would “turtle” in the face of pressure—especially up the middle.

However, while Haskins admittedly has flaws and needs work, in a less-than-stellar class at football’s most important position, Haskins is a top-two option who is unlikely to make it out of the top-10. Innumerable mock drafts, including the latest one from Matt Miller at Bleacher Report, have connected Haskins to the aforementioned Giants at No. 6.

“The New York Giants need a quarterback of the future, and by all accounts, they want someone to learn behind Eli Manning for a short time much like Patrick Mahomes did with Alex Smith,” Miller wrote. “Drafting a smart, talented quarterback who could benefit from some acclimation time in the NFL after only starting one year at Ohio State would help the Giants transition into their post-Manning era.”

Jason La Canfora of CBS Sports believes Haskins could go even sooner, writing that the Washington Redskins and New York Jets could complete a draft-day swap that would send Haskins to the nation’s capital at No. 3.

“Would the Jets really be open to dropping down all the way to Washington’s pick, way back in the middle of the first round (15th overall)? Yup. I truly believe so, for the right price,” La Canfora said. “And that price would be steep. The Jets would be sacrificing a sure-fire blue chip prospect potentially in the process, but in a draft where some evaluators I’ve talked to believe there are 12-14 non-QBs with absolute first-round grades, the Jets could still be in position to land one from that group even all the way back at 15.”

Whether it’s New York, Washington or another team like the Cincinnati Bengals, it appears that Haskins will probably begin his NFL career behind an established veteran starter. Given his relative lack of experience and polish, that’s probably for the best. But it means his redraft fantasy value is essentially non-existent.

However, teams don’t spend that kind of draft capital on a quarterback to sit him forever—whether it’s late in his rookie season or in 2020, he’s going to get a chance to lead an NFL team. And make no mistake—he has the talent to do so.

This isn’t to say that Haskins will ever consistently post top-five fantasy numbers. There’s more Derek Carr or Jameis Winston (without all the turnovers) to Haskins’ game than Russell Wilson or Patrick Mahomes.

But with a bit of seasoning and some weapons around him, Dwayne Haskins has the potential to become a middling weekly starter in 12-team dynasty fantasy football leagues. And in a format where depth under center is both more valuable and harder to come by, that makes Haskins worth a look later in both rookie drafts and startups.