What I Learned in My First Year of Tout Wars I was honored to be invited to join Tout Wars this year. Tout Wars is an organization of several Fantasy Baseball leagues of experts and industry writers. I was selected for the 12-Team Mixed League, which was a standard snake draft that uses a 5×5 rotisserie scoring system. The hitting categories are standard outside of OBP instead of AVG. On the pitching side, the five categories are IP, K, ERA, SV/HLD, and WHIP.

The draft went well, and despite the nerves, I felt pretty good leaving the draft table. I sat toward the top of the standings early on but slowly drifted to the bottom. As the clock struck on October 5, I ended up 11th out of 12 teams. Congrats to Matt Truss, who ran away with the league. 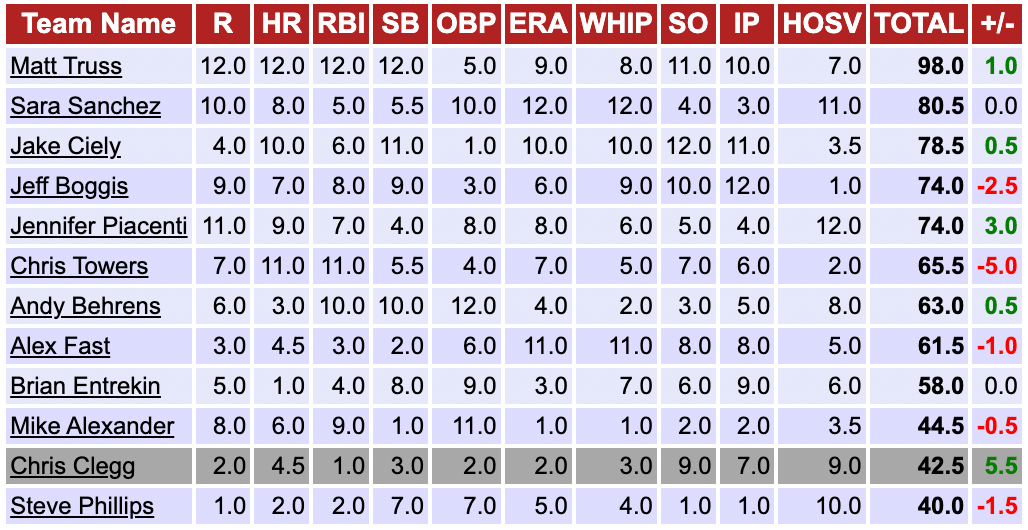 To say I had an embarrassing showing in my first season in Tout is an understatement. So, what went wrong? Why did I finish at the bottom? Let’s dissect the team. 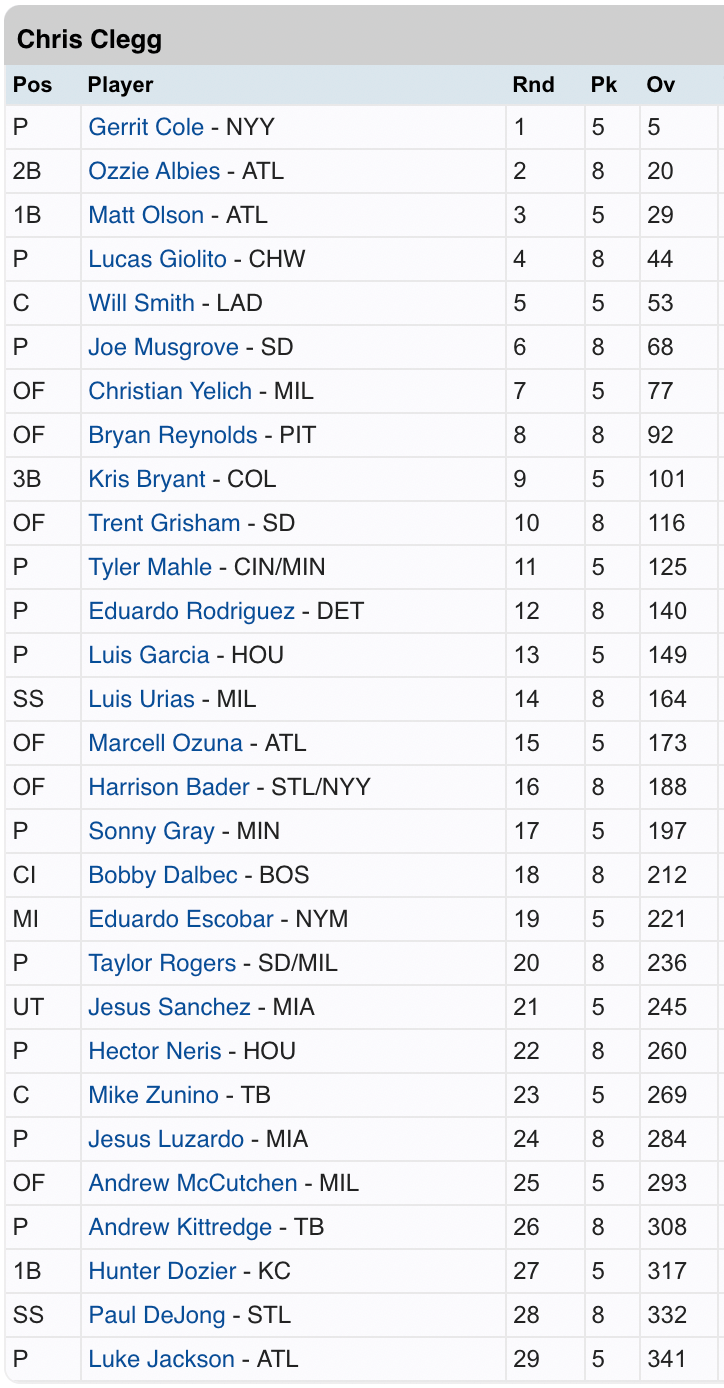 Going into the draft, the plan was to build a balanced team. I drew the fifth pick, which seemed like an ideal spot. With innings pitched as a category, I knew the importance of getting an ace, but I did not plan on drafting Gerrit Cole or any pitcher in the first round.

After my queue was empty when Tatis Jr., Soto, and Ramirez were the first three picks, I felt like Trea Turner was going to make it to me at five. This was an OBP league, after all, which led me to believe he could fall one more spot to five. After he did not, I pivoted to Cole. He was not at the top of my queue, so while it was not a bad pick, I probably should have trusted my gut and gone with a hitter.

My picks in rounds two and three were good processes, but I did not get the desired results. Albies takes a hit in an OBP format, but at pick 20, with a shallow second base position, Albies felt like the right pick. He was bad up until the time of his fractured foot. Up to that point, Albies had eight home runs, three stolen bases, and a .289 OBP. It would have been interesting to see how Albies’ season would have played out. He was riding a 12-game hitting streak(not counting his pinch-hit spot on 6/3) up until the day before he fractured his foot.

Olson had a fine year but not great by any means. He was ranked the 29th hitter for OBP leagues on the Razzball Player Rater. He hit 34 home runs and drove in 103 but had just a .325 OBP. It was a far cry from the .371 OBP he had in 2021. When your first two hitters in the draft provide such a low OBP floor, it’s tough to come back from.

Lucas Giolito was a complete bust for a fourth-round pick, but Joe Musgrove helped make up for that in the sixth. Unfortunately, Musgrove’s 181 ace-level innings were negated by a 4.90 ERA over 161.2 innings from Giolito.

I wanted a high-end catcher in this two-catcher format, and getting Will Smith in the fifth was a solid pick. He was a top-three catcher for fantasy purposes this year, as he posted 24 home runs with a .343 OBP.

Where The Draft Went Wrong

Through six rounds, I had no outfielders, and it is a five-outfielder format. I also am feeling light on speed and even power. It was the sacrifice for taking three pitchers in the first six rounds. It was not an ideal spot to be in, so I feel like I began to reach. I began to put too much emphasis on OBP and players who could provide both power and speed. I ended up getting players who provided minimal of each in the process.

Yelich was not a complete bust, but he also did not provide the power that I needed. Reynolds ended up being a solid pick at 92, but Bryant and Grisham were complete flops with my ninth and tenth-round picks.

I pivoted back to the starting pitcher market and grabbed Tyler Mahle, Eduardo Rodriguez, and Luis Garcia from rounds 11-13. Garcia was solid, but Mahle was underwhelming before his injury, and Eduardo Rodriguez was horrific early on, and I ended up missing some of his decent starts down the stretch as he did not make it on my team that long.

From rounds 14-29, the only players I hit on were Sonny Gray, Taylor Rogers(for part of the year), and Jesus Luzardo.

I deviated from my strategy because I missed safe hitters in the early rounds. I felt a need to make up in home runs and stolen bases, which caused me to draft bad players who I thought would provide in those categories. That was a bad process on my part. The draft is a large part of a team’s success, but a team wins championships on the waiver wire. Let’s take a look at how that process unfolded throughout the year.

Right off the bat, I whiffed in FAAB. Jeremy Peña was the prize pick-up in the only preseason FAAB run. For someone who had Luis Urias as his shortstop, I should have bid more than seventeen dollars. The only other player I bid on was Randal Grichuk, who I thought would be a stud in Colorado. Luckily I did not win him. Other players picked up that week were Hunter Greene, Nick Lodolo, William Contreras, Reid Detmers, Steven Kwan, and Bryson Stott. I was too content with my bad team to bid on any of those players.

One of my better waiver moves was grabbing Jorge Mateo in the first in-season FAAB period. I missed Kyle Wright, who went for $55, which was worth every penny.

My worst FAAB move of the season was grabbing Franmil Reyes in late April. I was confident he would rebound, and I needed power, so I placed a $211 bid. No one else placed a bid; ouch. I felt the need to keep running Reyes out in my starting lineup because I spent a fifth of my budget on him. It cost me. I also spent big on Mark Canha($79) in the same week, hoping to get an OBP boost. I learned a lot in FAAB this season as mistakes like these were made.

For three weeks, I laid lowkey during FAAB other than streaming the catcher spot Mark Zunino occupied to start the season. In the process, the nearly $300 wasted dollars on Reyes and Canha caused me to miss out on MJ Melendez, Cristian Javier, Spencer Strider, Jose Miranda, George Kirby, and other contributors in the coming weeks. Making desperation moves in April was a mistake, especially when I was still sitting decently in the standings.

I made very few impactful moves through FAAB until it was too late. I got Corbin Carroll upon his call-up and Jake Fraley before his hot stretch. At that point, it was just too late to make any kind of moves in the standings.

At the end of the day, my showing in my Tout Wars league was a huge disappointment. But this offseason is about learning from my mistakes and gunning for the title in 2023. It was a great honor to be a part of Tout Wars, and I am already looking forward to redeeming my performance in 2023. Thank you to all who followed along with my work this season. The offseason is in full swing, and I can’t wait to get waist-deep in draft prep for 2023.

It might be the offseason, but Fantasy Baseball never sleeps. Don’t miss the off-season content at FantraxHQ.