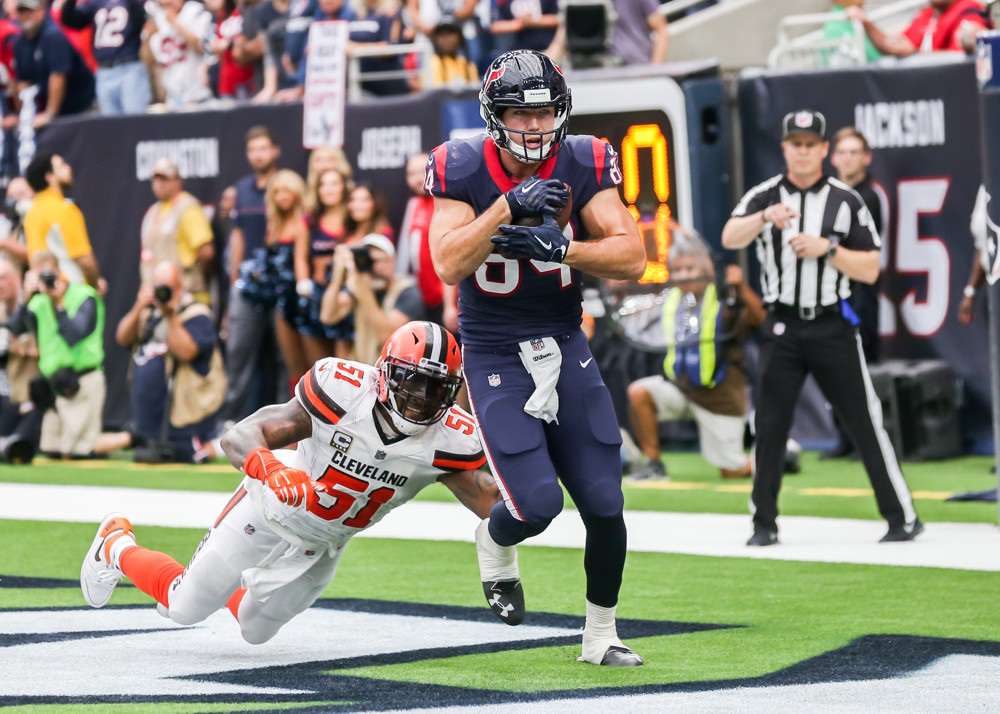 Generally, tight ends can be streamed on a week to week basis. While it does make roster decisions easier when you have a Kelce or a Gronk, streaming matchups at the position is viable.Week 1 is no different. There are low-owned tight end sleepers that are available in the majority of leagues. It is about finding the opportunity for that player (ideally a starter) against a defense that has a bad track record stopping tight ends.Here are my Week 1 tight end sleepers that can be plugged in right away for season-long OR make great value-plays in DFS.

Mark Andrews was the Ravens third-round pick in the NFL Draft. He is actually the more dynamic pass-catching tight end of the two rookies on this roster. Hayden Hurst, the Ravens first round selection, is projected to miss the first three-four weeks of the season.

The Ravens love to use two tight end formations. Nick Boyle and Maxx Williams figure to get playing time as they did last season. However, the playmaking ability of Andrews is undeniable.In his third and final season at Oklahoma, Andrews put up 62 catches for 958 yards and eight touchdowns. He averaged 15.5 yards per reception.

I have always thought of Andrews as the more explosive, more complete receiver between Hurst and Andrews. Now Andrews will get his opportunity

The Ravens host the Bills in Week 1 which is favorable by all accounts. Andrews makes for a sneaky Daily Fantasy play and can be plugged in immediately.

For all the hype DeShaun Watson and the Texans offense have gotten this offseason, there sure is no love for the starting tight end on this squad.

Last season, C.J. Fiedorowicz and Stephen Anderson were primarily used as Griffin only played seven games due to injury. Yet, in 2016 Griffin had 50 receptions on 74 targets while splitting tight end duties.

The Texans go into New England on Sunday to battle the Patriots. I see a lot of passing for the Texans in this game (just like last season when they played each other) which bodes well for Griffin.

Griffin is another of those sneaky Week 1 tight end sleepers that can be played in DFS in order to stock up on studs at premium positions. He possesses touchdown upside as a big-bodied, sure-handed target for Watson and will be a steady option underneath for the second year quarterback.

Former Raven and Panther, Ed Dickson, was placed on injured reserve early this week by the Seahawks.

All aboard the Vannett hype-train. Vannett is the starter and clear option for Russell Wilson in the passing game. We saw in preseason that Vannett can succeed running post routes out of the slot and can make catches in traffic.

The Seahawks were a pass-first team last season. If they cannot find traction through the running game, then things may be about the same in 2018.

Jimmy Graham moved on to the Packers but left his 10 touchdowns and his league-leading 26 red-zone targets behind. At 6’6”, 267 pounds, Vannett serves as a large target in the back of the end zone for Wilson and the Seahawks.

The Seahawks host the Broncos on Sunday who gave up the third-most Fantasy points to tight ends in 2017. Nick Vannett’s matchup gives him extra value this week, but he also offers the most value moving forward.