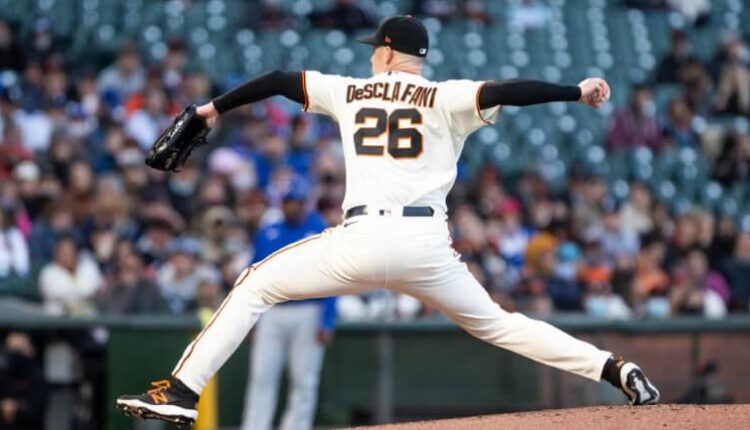 We finally got a break from the string of injuries decimating our starting pitcher rankings! Just when we thought it was safe to go back in the water, though…the spin rates crash! Following the announcement that MLB is going to really crack down on pitchers using sticky substances, many starters’ spin rates have mysteriously seen a sharp decline. Most notably (of course) Trevor Bauer has seen a steep decline in spin, and most recently, Shane Bieber. Even our aces aren’t safe in these murky waters. Whether you think the substance ban is going to be better for the game or not, our fantasy pitching boat is going to take on some water. Curse you and your lifeless eyes, Rob Manfred! Black eyes, like a doll’s eyes!

Anthony DeSclafani, SF (+4) – It’s just a marginal bump for Tony Disco on the list, but he deserves to be talked about. DeSclafani has had great success in his new Giants uniform, with a 3.09 ERA, 7.85 K/9, and 2.50 BB/9 through 75.2 IP. He went to the slider 40% of the time in his latest start, a two-hit shutout of the Nationals. The velocity was also up a full tick, to 88.5 MPH. I don’t expect him to climb nearly as high as his teammate Kevin Gausman has, but he’s going to be a useful fantasy starter with the increased slider usage. 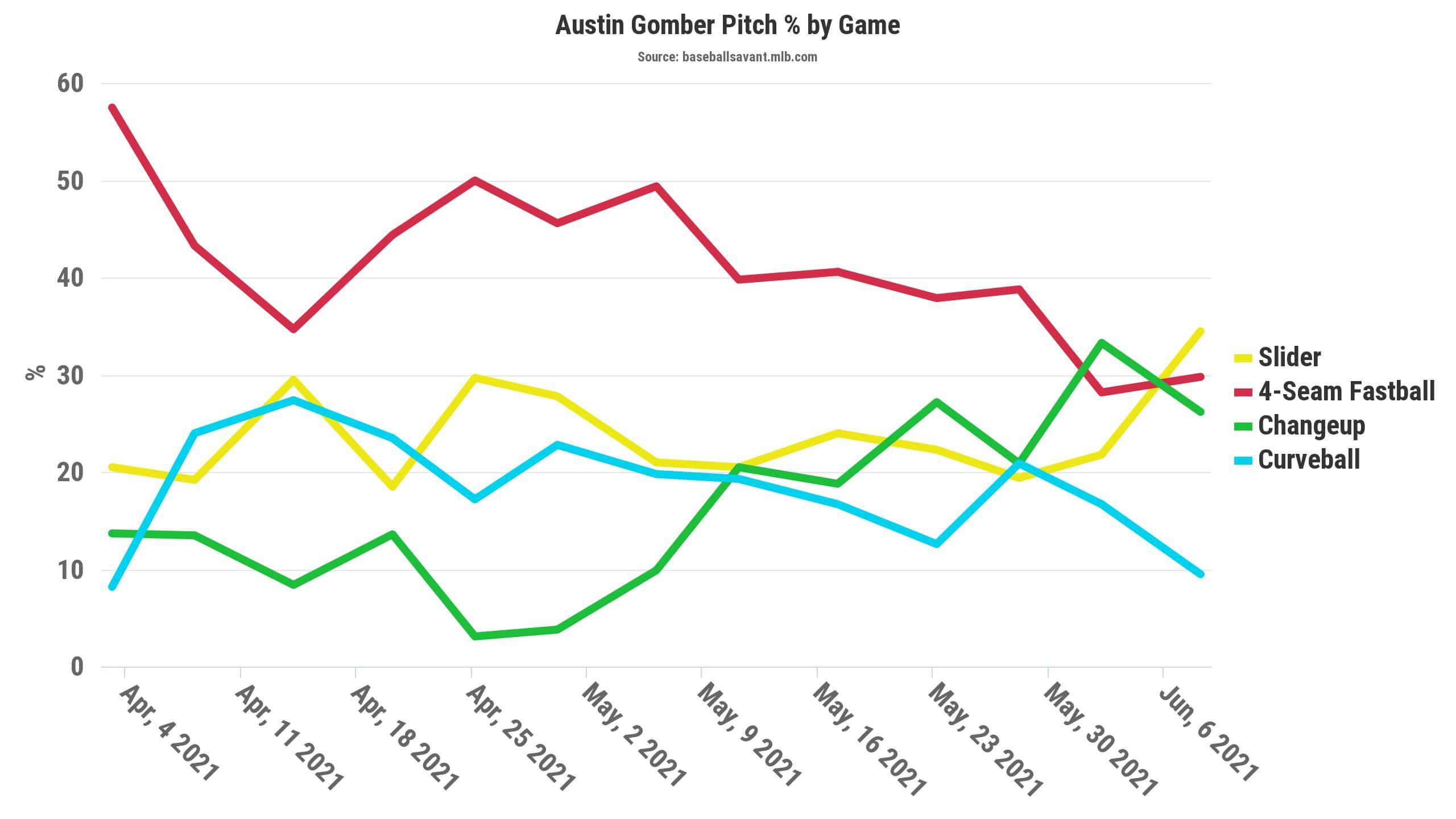 As you can see, Gomber is getting away from that bad fastball. He has even begun deploying more sliders than fastballs, which should help him sustain some of this success. 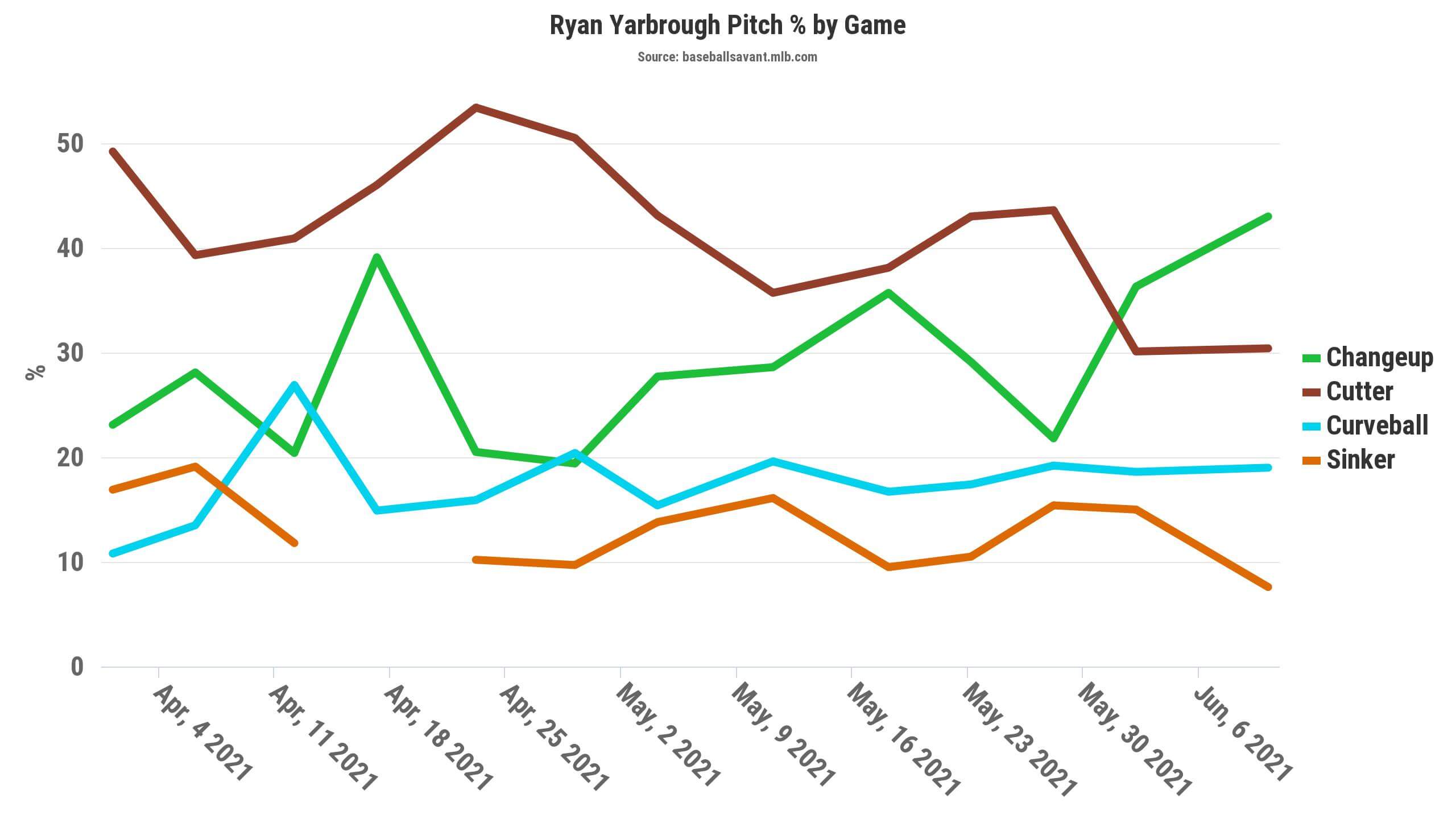 As with the aforementioned Austin Gomber, Yarbrough’s previous primary pitch – the cutter – has been eclipsed in usage by an offspeed pitch. However, Yarbrough only uses it against righties, opting for curves against lefties. As long as Yarbrough remains a starter, he is, at the very least, an interesting streamer. He ranks inside the top-5% of the league in average exit velocity (84.6 MPH), Hard% (27.7%), and BB% (4.1%).

Nathan Eovaldi, BOS (-19) – There’s not too much shame in giving up five earned runs over 5.2 IP against a red-hot Houston lineup, which is exactly what Eovaldi did last week. However, after not allowing a home run through his first nine starts, he has allowed three in his past four starts. Is it the end of the world? No. However, when you take a look at his previous HR/FB rates since 2016, his current 4.8% mark sticks out just a little bit. 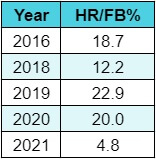 I’d expect those homerun chickens to come home to roost sooner or later, meaning I’ve had Eovaldi a bit higher in my starting pitcher rankings than I should have.

Jameson Taillon, NYY (-10) – I’ve been really rooting hard for Taillon, considering all he’s been through in his career. Unfortunately, it’s just not happening for him right now. He has a 5.74 ERA on the season after his latest start in which he gave up four runs while recording just one out before being pulled. His velocity isn’t where it used to be, down a full tick since 2019. There is a small glimmer of hope, as his ERA is far higher than his 4.48 FIP or 3.90 xERA. At this point, however, he’s just a deeper league hold.

Tucker Davidson, ATL (SP96) – Davidson has been successful through his first three starts. Over his last two, in particular, he has blanked the Nationals and Phillies. However, that comes with a mere 9:6 K:BB ratio over 11.2 IP. He is throwing 40% sliders, however, a pitch that has allowed a .077 BAA and 35.6% whiff rate thus far. He isn’t a high-end pickup but could be an interesting streamer.

Patrick Sandoval, LAA (SP98) – Sandoval earned himself a spot on the list with a strong week. First, he struck out 10 Mariners and then logged a quality start as he went six innings with two earned runs against the Diamondbacks. He has yet to allow more than two runs in a game through five starts since moving out of the bullpen. He has a lethal changeup, which had a 67% whiff rate in his latest effort. It’s primarily a fastball/changeup approach for Sandoval right now, which caps his ceiling a bit. That said, if his slider or curve come along enough to give him a decent third pitch, we could be looking at a prolific career for the 24-year-old southpaw.

For more help on the pitching front, check out Mike Carter’s Two-Start Pitchers for the week.

MLB DFS LOOK AHEAD: Stacks and Fades for June 14-17