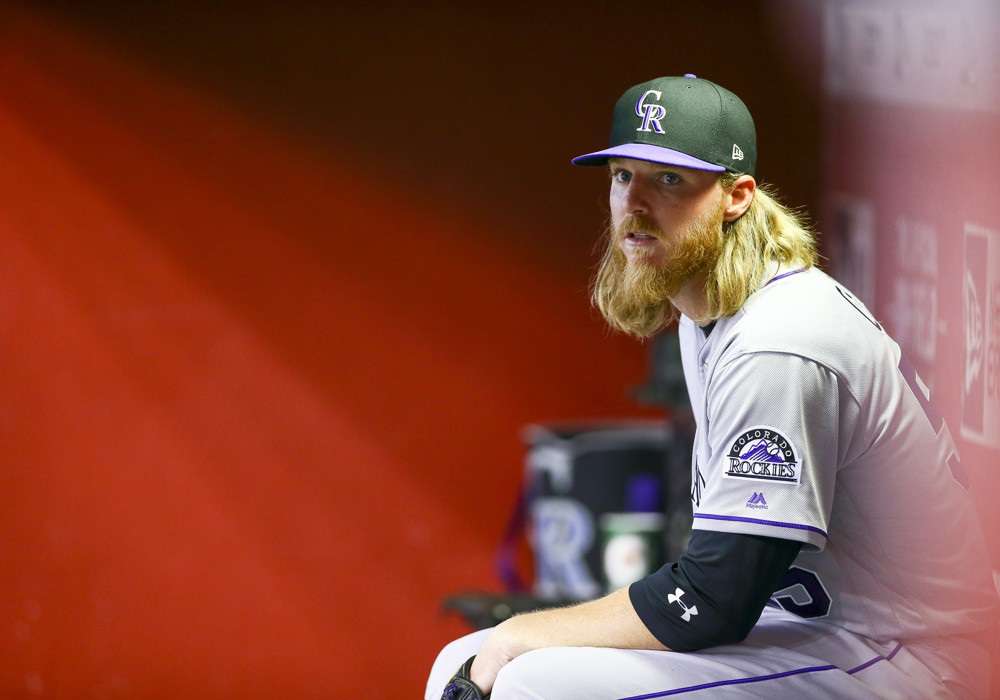 This week marks Independence celebrations in the United States and Canada and baseball has played a major part in these celebrations. Hopefully, none of them will be like what happened in 1900 when approximately one thousand people in the crowd of 10,000 fans attending a game at Chicago’s West Side Grounds celebrate Independence Day by firing pistols into the air. With most of the country dealing with a great deal of heat this week, MLB news and notes features an opening day starter feeling the heat as he deals with being demoted to the minors.

The Rockies optioned  Jon Gray to Triple-A Albuquerque on Saturday. Gray’s struggles seem to stem from his fastball. He uses it around 51 percent of the time but it has a .428 wOBA against it. He has given up seven of the 11 total home runs off the fastball, three of the four triples, 12 out of the 22 doubles, and 37 of the 71 singles he’s allowed. It seems that his velocity and location with the pitch have been the main issues and the Rockies decided that a trip to Albuquerque would be the answer. If you can, keep him on your roster. He has the skills to put up decent numbers if he can figure things out.

Vince Velaquez hit in the arm by a line drive

In the second inning Saturday against the Nationals, Adam Eaton lined a shot back to the mound that hit Vince Velasquez so hard that it caromed directly off his right elbow/forearm and to the left of the mound. Amazingly, Velasquez fielded the ball and fired it left-handed to throw out Eaton by a step at first base. The good news is that X-rays were negative, a better result than most anticipated. However, the Phillies did place Velaquez on the 10-day DL due to the bruise on his right forearm.

Vince Velasquez takes a line drive to the right arm(his throwing arm) so he picks the ball up and gets the out with his left! He left the game due to the injury. What a play by him pic.twitter.com/Uy6Z1nt2iA

Carlos Carrasco will return to the Indians’ rotation on Friday against Oakland. He has been sidelined since being hit by a line drive to his right elbow in a game against the Twins on June 16. Carrasco pitched four scoreless innings in a rehab start for Double-A Akron on Saturday night and hit 97 mph on the radar gun. Carrasco is 8-5 with a 4.24 ERA in 15 starts this season.

Three Twins leave a game due to excessive heat

Minnesota’s Eddie Rosario, Bobby Wilson and Max Kepler all left early Saturday because of heat illness on an extremely warm day in Chicago. The Cubs said the heat index was 107. That’s a calculation of how hot it feels, with humidity factored in. Fantasy owners are usually aware of how rainouts affect their team, but with extreme heat gripping much of the country, owners should monitor how this affects playing time.

Shohei Ohtani has been cleared to begin hitting immediately and will be reevaluated in three weeks. Ohtani has been on the disabled list since June 8 with a Grade 2 sprain of the ulnar collateral ligament in his right elbow. Before landing on the DL he was batting .289/.372/.535 with six home runs and 20 RBI. It is not clear if Ohtani will pitch again this year.

.@angels GM Billy Eppler announces Shohei Ohtani is “likely to return as a hitter no matter what.” https://t.co/8db3lKqynt pic.twitter.com/PpkMlp0xQ8

Blue Jays closer Ryan Tepera went on the disabled list Saturday with inflammation in his right elbow. He first experienced what he described as lingering elbow soreness after pitching last Sunday in Anaheim, and felt it again after throwing in Houston on Wednesday, following two days of treatment and rest. Tyler Clippard and Suenghwan Oh are the top candidates to close games in Toronto.

Shin-Soo Choo sat out of the Rangers lineup a night after reaching base in his 41st consecutive game. He has been dealing with a sore right quad for at least 10 days and Choo has said it has really bothered him the last couple of days. Choo did start at DH on Sunday, but this is another situation for fantasy owners to monitor this week.

The Yankees called up Brandon Drury on Friday for the start of a weekend series against the Red Sox at Yankee Stadium. The Yankees faced three lefty starting pitchers in Boston’s Eduardo Rodriguez, David Price, and Chris Sale over the weekend. Drury, a righty hitter, has hit lefties at a .306 clip with a .918 OPS this season. He’s been in the minors for 49 games, hitting .295 with six homers and 29 RBI. While in Scranton, Drury played six games at first base, indicating that he may see time there instead of the struggling Greg Bird. Drury did start at first base in Saturday’s games against the Red Sox. This gives him added value in fantasy.

Yu Darvish went to Texas to get another opinion on the sore triceps muscle that flared up again in a bullpen session last Thursday. Unfortunately,  Darvish got a cortisone shot in the area and reports indicate that the injection would take three to five days “to settle in.” There is no firm timetable for his return.  Meanwhile, Mike Montgomery continues to pitch well in his absence.

The Astros placed  Carlos Correa on the 10-day disabled list Friday with a sore back, retroactive to June 26. Correa has been out of action since Monday and continues to progress, but not enough to where the Astros felt they could play him. He is eligible to return July 6 against the White Sox.

Angels pitcher John Lamb becomes the third pitcher on the team this season to have the season-ending surgery for a torn ulnar collateral ligament. He joins teammates Blake Wood and Keynan Middleton in undergoing the surgery this season. Jake Jewell underwent successful right ankle surgery Friday after he broke his ankle as he ran in to cover home plate Wednesday in a game against the Red Sox. Finally, we have Zack Cozart, who had surgery to repair a torn labrum in his left shoulder. He will have an estimated a six-to-eight-month recovery.

Danny Salazar to have exploratory surgery

Danny Salazar will have arthroscopic surgery on his right shoulder on Monday. Salazar has been on the disabled list all season. The Indians have said that there is no timetable for Salazar’s return, but it is unlikely he will be pitching anytime this season given that he hasn’t pitched in a game since last year. Salazar hasn’t been healthy since the first half of the 2016 season when he pitched well enough to make the All-Star team. He has struggled with right forearm, elbow and shoulder soreness since.

Vizcaino and Polanco to return this week.

Arodys Vizcaino threw a side session Saturday and will rest Sunday in anticipation of a Monday return to the Braves, according to Gabe Burns of The Atlanta Journal-Constitution. Vizcaino, who was placed on the disabled list last Sunday with shoulder inflammation, should reclaim his role of closer upon his activation, though Dan Winkler remains a setup man of interest in many fantasy leagues. Twins infielder Jorge Polanco is progressing in rehab extremely well and is aiming to return on July 2, his first eligible day after serving an 80 games suspension. He is hitting well in the minors and he should be picked up quickly in most fantasy leagues. Polanco hit 13 homers, had 13 steals, and drove in 74 runs in 2017.

For more MLB News and Analysis check out our full library of Fantasy Baseball content.

Why not relive Draft Day a second time this season? Head on over to Fantrax where you can draft a team 364 days a year.