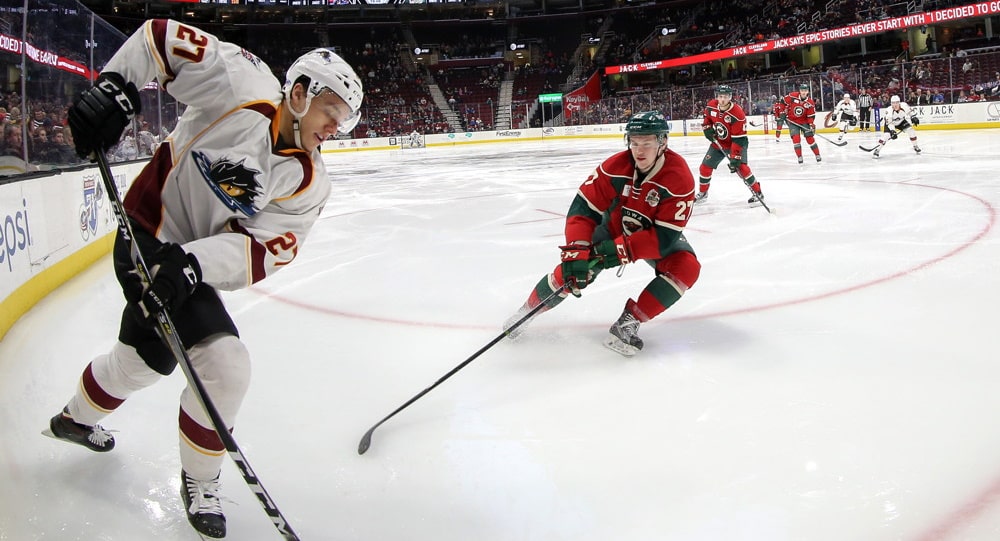 NHL Stars aren’t always top picks. Every player has their own path – or so they say. Every year it gets increasingly more difficult to make an NHL team. The numbers are black and white, if you aren’t improving, you aren’t playing. Behind every NHL star is a unique story of trials and tribulations. Some find their way to the NHL easier than others, but no two players have the same story. Today we’ll sift through a few NHL prospects that have, at the tip of the iceberg, a statistical story to tell.

These 5 players are considered ‘late bloomers’, and although they don’t have the appeal of a 19-year-old dynamo, the value is still there. Using Fantalytica’s prospect projection platform, we crafted this list of players with a late bloomer mindset. Regardless of their path, each prospect should be considered for your dynasty team. Numbers tend to tell the future of players who take longer to reach the final floor. Let’s jump in! 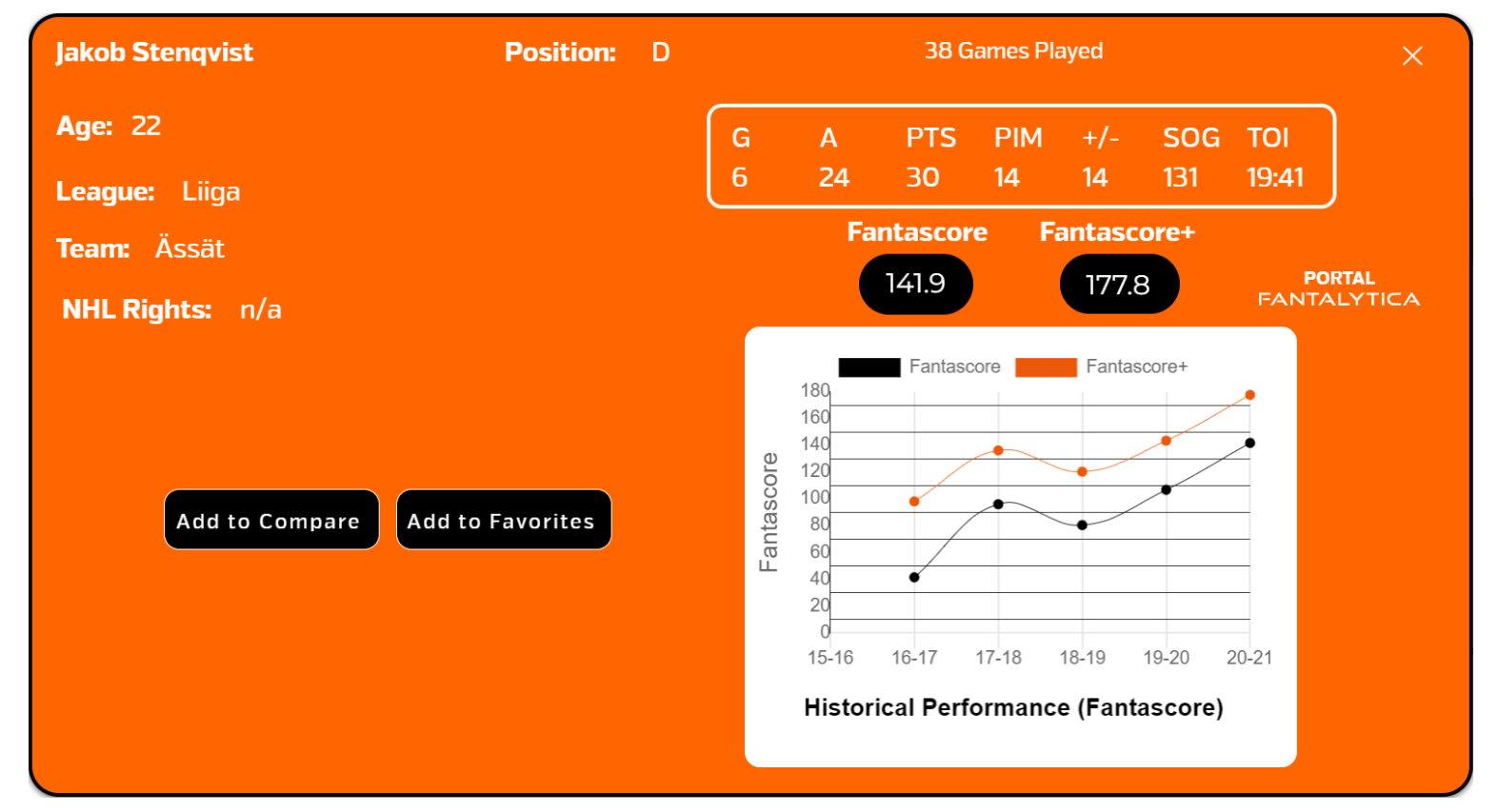 Stenqvist who? Yeah, we had to research this guy too. A name you’re unlikely to know, Stenqvist is a 23-year-old Dallas Stars draft pick from 2016. He’s yet to cross the pond or sign with the Stars, so don’t get too excited about thinking you’ve found the next John Klingberg.

Lucky for you, the numbers may suggest there’s a chance. Not just any chance, but a real chance. As you can see above, his player card (pulled from Fantalytica) shows impressive growth year over year. He skipped from the Swedish Allsvenskan after the 2018-2019 season to the Finnish Liiga, where he’s currently obliterating the league from the blueline. 30 points in 38 games is lethal. Any professional league where a young (ish) player can pop a near PPG as a defender is special. The Stars scouted extremely deep in 2016, Stenqvist had more games in the Swedish 2nd tier junior league than the main league.

Stenqvist is a prospect to keep an eye on, to say the least. If you have one minor spot open and could use a shot-in-the-dark chance at finding a solid defender for the future, Stenqvist could easily be that guy. 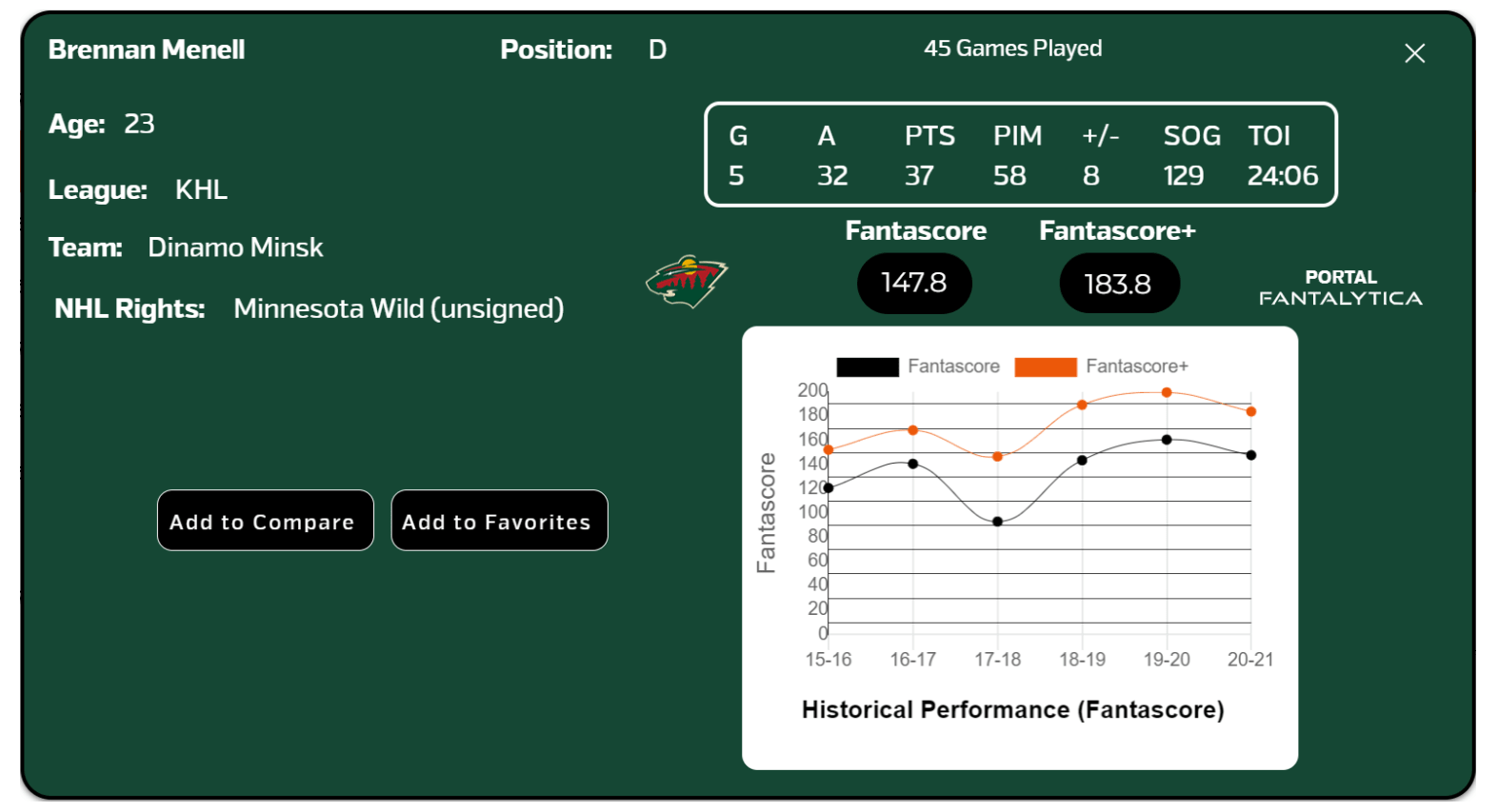 Menell has a fantastic story. An undrafted free agent signed by the Minnesota Wild in early 2017, Menell has fought tooth and nail to be where he is today. After a few years of solid performances, he was moments from reaching the NHL – COVID came and swiftly paused that momentum. Menell then had a choice, roll the dice for a spot on the crowded Wild’s blueline, or flee to Russia in hopes for a breakout year. The bet on himself has paid off, greatly. He went from being a B-level prospect to a top prospect (for the Wild).

For what it’s worth, Fantalytica has been high on him since his signing day. He has contributed high volumes of assists for the Iowa Wild, the Minnesota Wild’s AHL team, for 2 straight years. It appeared that he was fed up with Wild Management prior to the current season, as his departure seemed to ruffle up the feathers of Guerin (Wild GM). Now that the shenanigans are in the past, Menell has shown a light in his game while playing in the KHL. He’s only 23 and is very close to a point per game after 45 games. He logs heavy minutes for Dinamo Minsk on a nightly basis and is by far their most valuable player.

They’ll do everything they can to keep him around. Menell may have a redemption tour coming soon. Now is the time to pick him up. 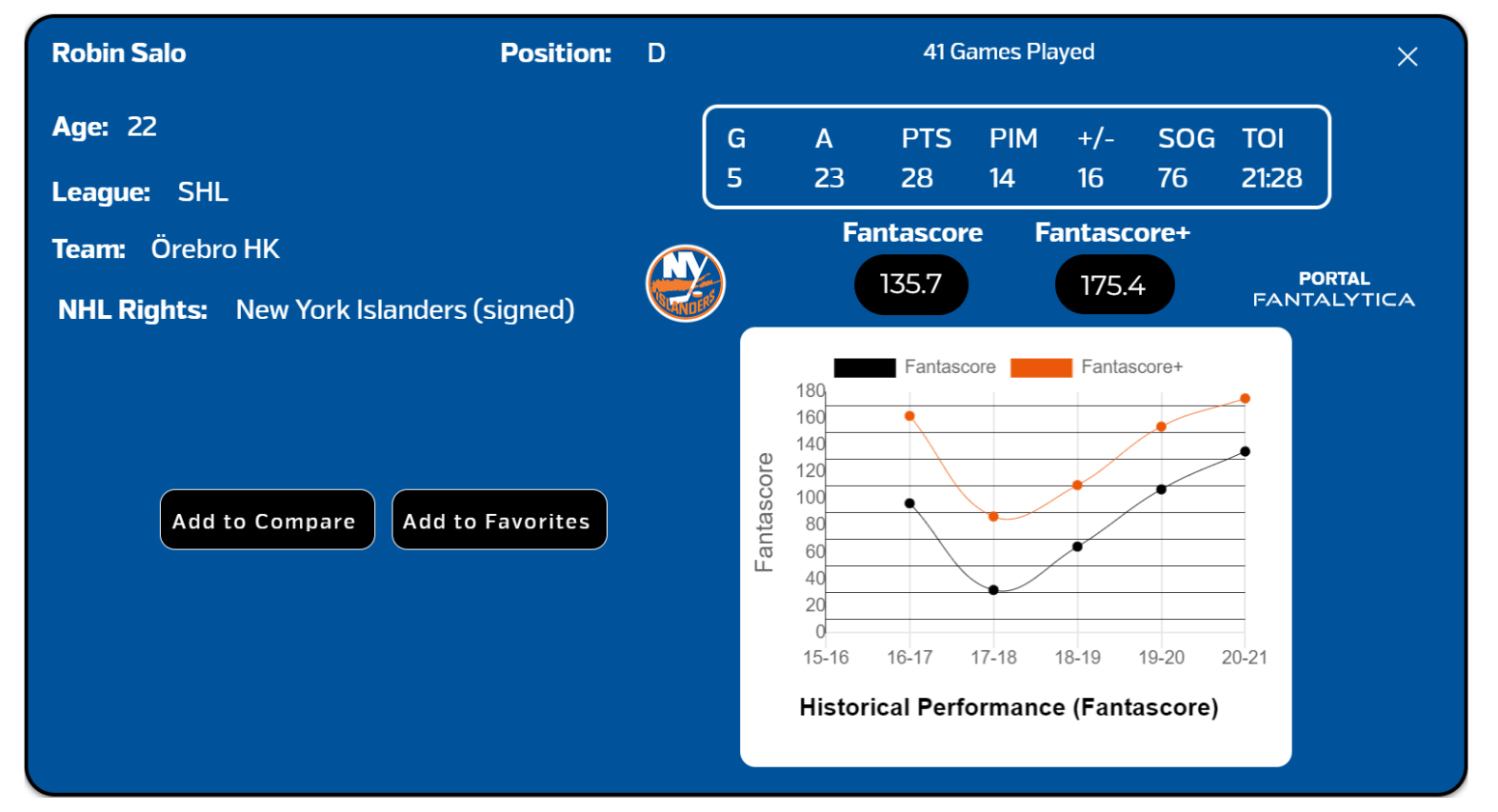 Salo was in the news recently – he signed an ELC with the New York Islanders. 3 years ago he was drafted in the 2nd round of the NHL Draft (2017), and although the skeptics lingered, Salo has found a way to develop at a slow and steady pace. It appears that last year was his coming out party. He finally had enough of the Finnish Liiga last year and made the strategic move to Orebro in the SHL. After 41 games this year, he’s accrued 28 points, good for 2nd overall on his team and 26th overall in the league.

The Isles likely plan on bringing him to North America after his season concludes – Bridgeport being the expected destination. He reminds me a lot of Jakub Zboril, who took (what seemed to be) ages to develop. Consider picking up Salo before he leaves Europe – your fellow dynasty league opponents read these articles too, by the way. 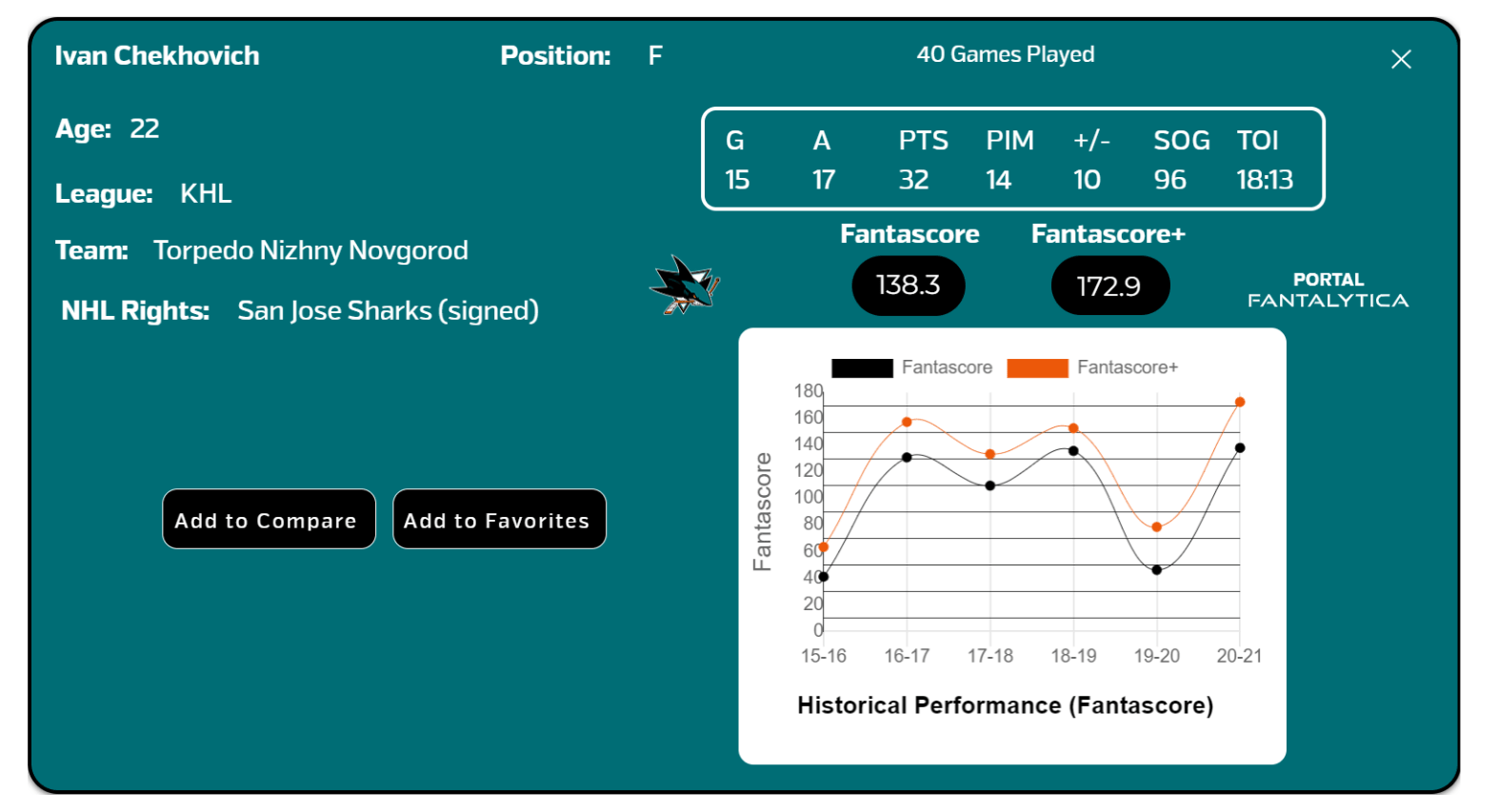 Chekhovich is usually lumped into a trio of San Jose Shark Prospects when the media mentions his name. The other prospects being Joakim Blichfeld and Alexander Chmelevski. I guess it’s sort of relevant here because all three were taken in either the 6th or 7th round of the NHL Draft. Chekhovich currently plays for Torpedo Nizhny Novgorod (yep, real team) in the KHL.

He’s producing at a wicked clip thus far – 32 points in 40 games. Half of his points are in goals, so the upside he brings is evident. From the graph above, you can see that Chekhovich slipped in 2019-2020, largely due to a crowded San Jose Barracuda lineup. To preserve his chances of playing in the NHL on a regular basis, Chekhovich quickly signed a deal after COVID hit. By departing for Russia, Chekhovich gave himself a clean slate to work with. It’s paying off daily. Look to see if Chekhovich is available in your league, if so, scoop him up. In deeper leagues, he’s likely unavailable from free agency. 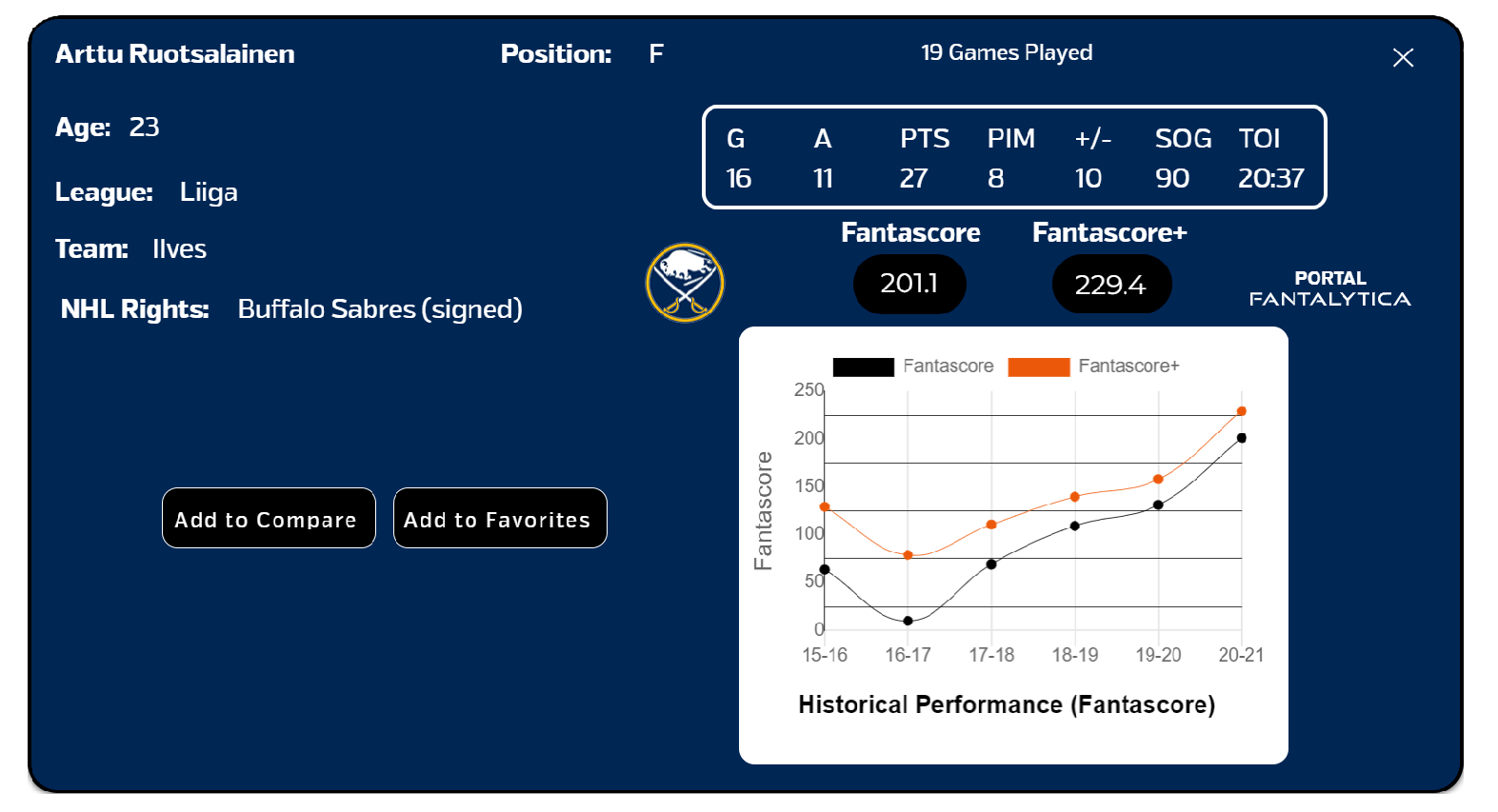 Boy, have the Buffalo Sabres ever needed more help than now, huh? Ruotsalainen is a name you probably know if you follow the Sabres closely. A free agent signing out of the Finnish Liiga in early 2019, Ruotsalainen has came in hot. After a 19-game stint in the Liiga to start the year, he moved over to the Sabres’ AHL affiliate, the Rochester Americans, immediately. Prior to the AHL, he had a whopping 27 points in 19 games, with a ‘measly’ 16 goals. He outgrew that league, to put it lightly.

His next stop is America, where so far he’s culminated 4 points in 5 games. If he can continue to produce for the Americans, there’s no doubt in my mind that he’ll find his way onto the Sabres, likely in a bottom 6 role. One thing is for certain, he has improved every year. If he keeps it up, he’ll definitely be an NHL player. I’d imagine he’s available in your league. If so, pick him up and cross your fingers!

Thanks for reading this week’s dynasty prospect article. To learn more about finding the perfect prospects for your dynasty league, check out Fantalytica. We let you connect your league settings so you can see the expected performances of every prospect (12,000+). We have 15 filters and a fancy compare tool that shows you more of these player cards you see above.