Josh Bell: Is It Time To Sell? 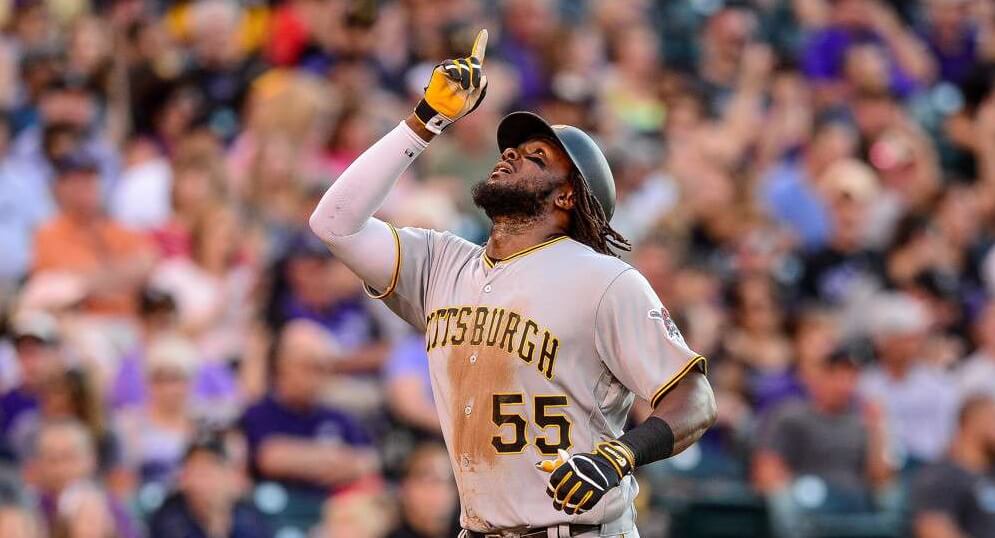 After a strong 2019 campaign, Josh Bell was selected at an ADP of 93.5, according to NFBC. Fantasy owners who drafted him were probably disappointed that Bell slashed .226/.305/.364, with only eight home runs in 2020. It was a strange season for many players, so was it merely a flukey season for Bell, or is it a sign of things to come?

In early drafts, it is clear that Fantasy Baseball players are not sure what to do with Josh Bell as he has a wide range of picks in early mocks. What can we take away from his 2020 performance, and what should we expect moving forward? Let’s dive into Josh Bell’s profile.

It has been a rocky last three season for Josh Bell. We know his 2019 season was elite, but 2018 and 2020 could be classified as disappointments. It is interesting that during odd-numbered years, Bell seems to perform better. Could 2021 be a better year for Bell? Let’s dive a little deeper into the stats from the chart above.

There was a significant drop in power in Josh Bell’s game in 2020. After mashing 37 bombs in 2019, good for 15th among all hitters, Josh Bell was on pace to hit 22 home runs in 2020. While he did have a slight drop in exit velocity and hard-hit rate, it was not enough to see a large drop in power. Was Bell’s power surge in 2019 from the juiced ball? Is he ever likely to return to the 2019 power output?
Bell did see a significant drop in his barrel rate in 2020. He also saw a large drop in his average launch angle from 12.9 degrees to 5.9. Those numbers will be discussed more in the statcast section of this article, but there are plenty of reasons why Bell saw a decline in power in 2020.

As we previously mentioned, Josh Bell saw a large decrease in his average launch angle. As you might expect, that led to a huge spike in ground balls. Bell’s ground ball rate jumped by over ten percent in 2020 from 44 to 55.7 percent. He also had a drop in his pull percentage, which is likely why he saw a decline in home runs.

The good news is, Bell posted another high home run per fly ball rate of 22 percent, which was just slightly below his 2019 mark. Unfortunately, he only hit fly balls at a 25 percent rate instead of a 37 percent rate in 2019. His batted ball distribution was also similar other than Bell hit more balls up the middle and pulled them less. The lack of pulled-fly balls can be an explanation of why Bell’s power decreased. 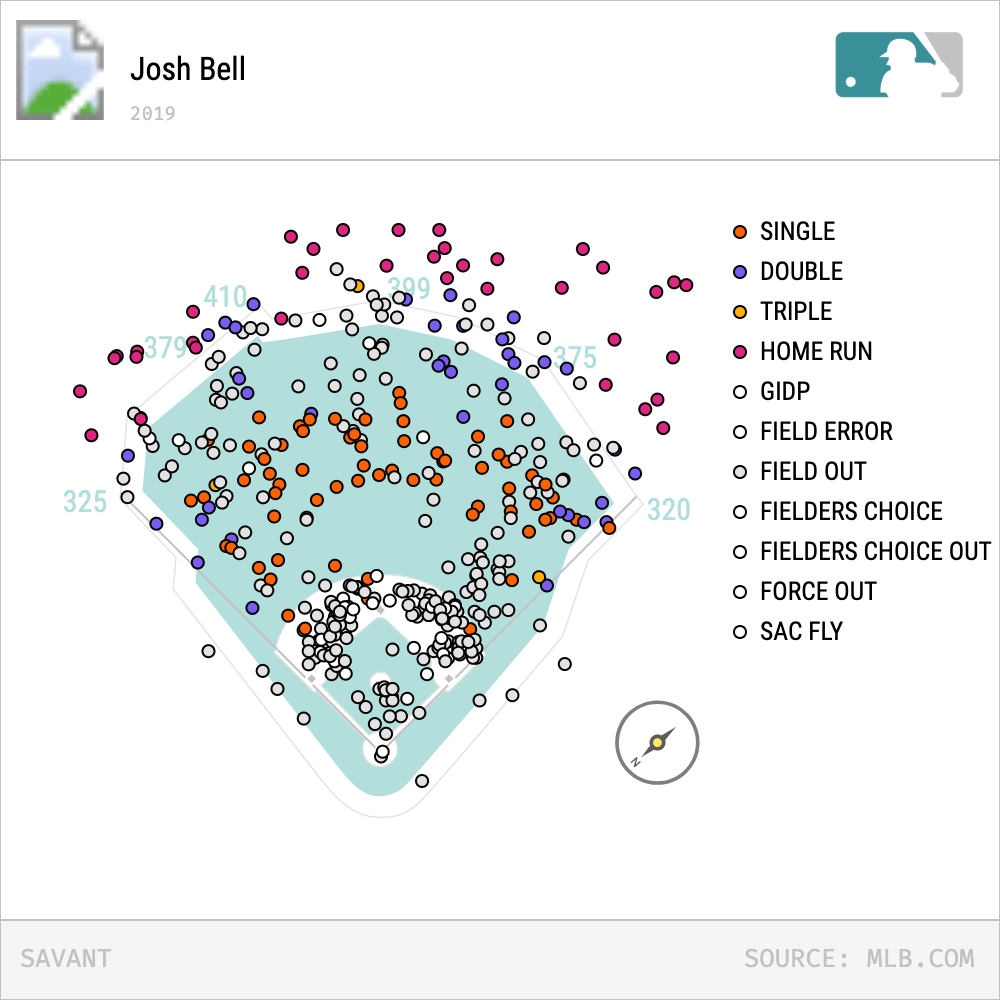 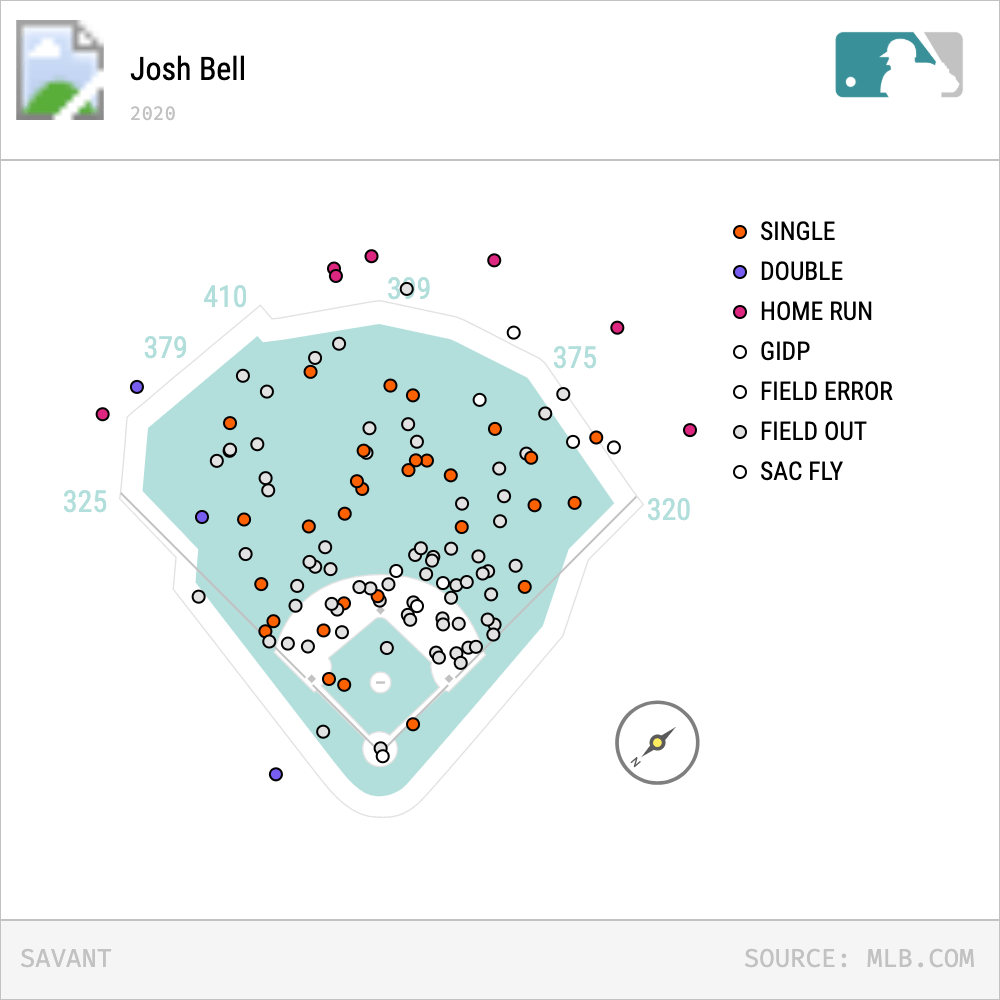 Here is where things begin to get ugly for Josh Bell. For the fifth consecutive season, Bell saw an increase in his swinging strike rate, which means he is swinging and missing more. In direct correlation with that, he saw a large drop in his contact rate. Much like his swinging strike rate, Bell’s contact rate has dropped every season of his career. In 2020, it was a massive drop into territory hitters do not want to be in. Anything below 70 percent is a scary number for hitters. Many solid hitters have low contact rates, but it provides a risk I do not want to take when drafting players for Fantasy Baseball.

Bell also swung much less in 2020, largely on pitches in the zone. If he lowered his O-Swing rate, I would be encouraged, but the fact is Bell’s Z-Swing rate dropped by nearly six percent is discouraging. Was Bell not seeing pitches well? Was he one who was affected by the lack of video available? Regardless, it was a trend in the wrong direction for Josh Bell at the plate in 2020.

I have previously mentioned that Josh Bell is a better hitter from the left side of the plate. Nearly all of his power comes from the left side. Between 2019 and 2020, 34 of Bell’s 45 home runs were as a left-handed hitter. That seems obvious, as Bell faces right-handed pitching most often, therefore hitting from the left side.

There is nothing notable in Bell’s splits outside of hitting worse from both sides of the plate in 2020. Where things get really interesting is when we look at Bell’s monthly splits.

Several numbers from Josh Bell’s statcast profile were previously mentioned. Let’s first look at Bell’s expected slash. We know his actual numbers were not great at .226/.305/.364. On the positive side, statcast suggests that Bell’s expected batting average was slightly higher at .226, and his expected slugging percentage was .382. Those are not impressive numbers by any means, but still better. The bad news, Bell’s xwOBA was a disappointing .289. This was coming off of a 2019 season where Bell had an expected slash of .288/.390/.565. So it was a big drop off, to say the least for Bell.

Bell saw a slight drop in hard-hit rate and average exit velocity but not far enough to be noteworthy. The biggest drop was in his barrel rate and launch angle. The seven-degree drop in launch angle is a big factor for why Bell hit fewer home runs and more groundballs. His sweet spot percentage (Batted balls between eight and 32 degrees) dropped 11 percent from 35 percent in 2019 to 24.3 in 2020.

Josh Bell has stayed relatively healthy throughout his career. His lone trip to the Injured List came in 2018 from a Strained Left Oblique. That injury did not keep Bell sidelined for long, though. He also dealt with a hamstring injury at the end of 2019 that kept him out for the final two weeks of the season. Bell recovered fine and was able to return strong in 2020.

Since Bell’s first full season in 2017, he has played 507 out of 546 possible games. Playing nearly 93 percent of the Pirates games is an impressive feat. You should feel fine from a durability standpoint when drafting Josh Bell.

Josh Bell’s 2019 season will likely be an outlier for his career. Looking at the larger picture, I have a hard time buying that Bell will ever produce numbers like that again.

His ADP in the #2EarlyMocks averaged at 153 between nine leagues. His high pick was 95, and the low pick was 203. The wide range of pick shows most people are not sure how to value him. If you are in an OBP league, Bell is more valuable, so drafting him at pick 153 feels like a good bet. Even in standard 5×5 leagues, a small bounce-back could lead Bell to provide a return on investment.

My early projection for Josh Bell has him getting 600 plate appearances. Over those 600 plate appearances, I would expect a slash close to .260/.360/.465 with 25-28 home runs and between 75-85 runs and RBI. There is obviously the potential for more given what you saw from Bell in 2019, so there is a chance profit at his ADP cost. With first base being a shallow position for Fantasy, waiting until the later rounds to draft a player like Bell could be a good bet. If you own Bell, hold on, it is certain to be a wild ride.

If you enjoyed this deep dive, be sure to check out all of our offseason content at Fantrax HQ as we help prepare you to win your leagues in 2021.