Each week I look at two players on opposite ends of the performance spectrum. This week it’s Trevor Story and Salvador Perez. Fantasy owners are fired up over one and fed up with the other. The important question now is, how should they feel moving forward?

Trevor Story exploded into fantasy stardom in his rookie season, not unlike a tasty Fruit Gusher might explode in your mouth. He hit 27 bombs in just 97 games for a huge .296 ISO. He even hit for a solid average (.272) despite a 31% strikeout rate. Trevor Story came down to earth last year however, as Coors couldn’t help him manage an average above .240. His ISO dipped to .219 as he hit 24 homers in 145 games. While it was a bust for those owners last year, it led to a reasonable ADP this past draft season.

To this point in 2018, he has hugely rewarded those who took a chance on the rebound effort. On the year he has 16 HR and 9 SB already, with the ISO at a much nicer .259. His average is even back up to .266, with a .319 BABIP that is actually even lower than the .332 mark from a year ago. Trevor Story has been out of his mind over the last two weeks especially: 11 R, 5 HR, 15 RBI, 1 SB, .344 AVG. It is at this time we have to ask ourselves…*sits back in leather chair, cleans monocle with embroidered handkerchief that reads “World’s Fanciest Analyst”, places monocle before left eye, raises right eyebrow*…is this Story fact, or fiction?!

One of the biggest changes you see if you pull up Story’s player page is a huge improvement in strikeout rate. He has cut that bad boy from 31 percent in 2017 to 26 percent this year. That is no small feat. Have a look at the adjustments he has made to improve the strikeout rate. 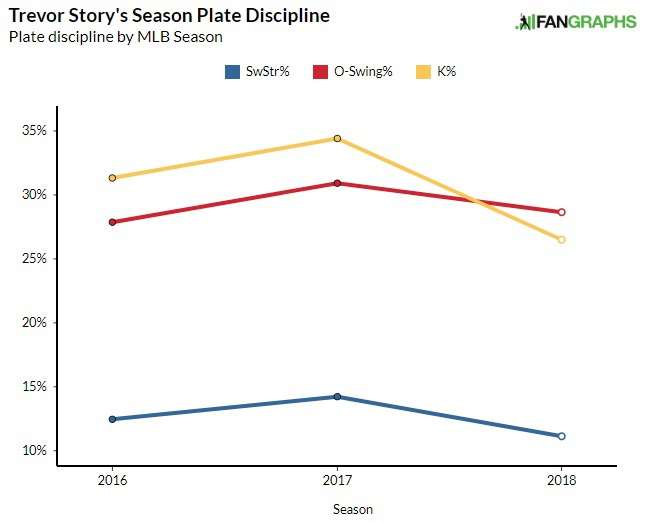 Less of the bad! He’s whiffing less and reaching on fewer pitches off the plate, leading to his improvement in strikeouts. 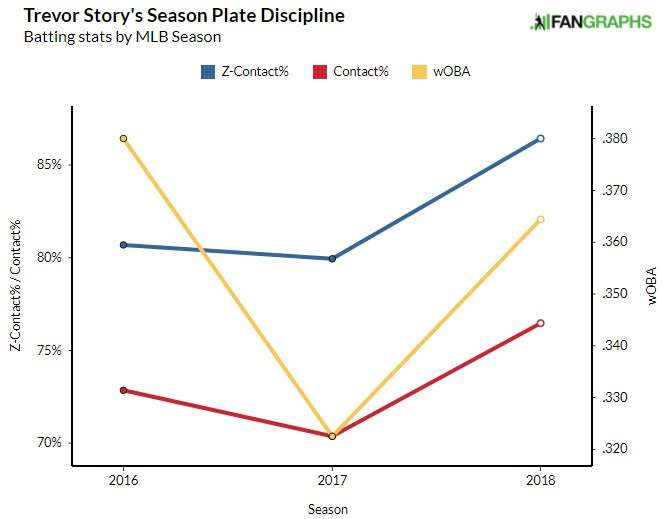 More of the good! He’s punishing the pitches that are in the strike zone, upping his zone contact rate to 86 percent. His overall contact rate has followed, up at a career 77 percent. Much of this improvement has come against offspeed pitches. In 2017 he hit for a gross .278 wOBA against offspeed stuff with a 47-percent whiff rate. This year he’s turned that weakness into a strength, with his wOBA skyrocketing to .504 while cutting the whiffs nearly in half to 25 percent.

Of course, if you want to nitpick, you can consider 2018 Trevor Story a product of Coors. Over 121 at-bats at home, he has a crazy 1.191 OPS. On the road? .612, over 165 at-bats. While this makes him a bit of a nuisance in weekly head-to-head leagues when the Rockies head out on the road, overall you have to start him every week in all formats. He’s made wholesale improvements to make more contact, and more contact is never a bad thing. Unless you ask my high school girlfriend. Don’t try to sell high on Trevor Story, just hang on tight and enjoy the ride – you’re looking at an easy Top 10 shortstop here.

Packing your luggage sucks. Dragging your stupid luggage around the airport while you’re trying to figure out where you’re going sucks. But have you ever torn your MCL carrying said stupid luggage up some stairs? I didn’t think so, so stop complaining. It’s just me complaining? It’s just me complaining. I don’t like traveling. Don’t mind me. Anyway, Perez missed nearly a month of action because that exact scenario happened to him. This is what bellhops are for! Fantasy heartbreak ensued.

It is not for this reason, however, that Salvador Perez finds himself in the Ice portion of this article. No, it’s because over the last two weeks he’s hitting just .174 with 2 R, 1 HR, and 1 RBI. One can surmise that home run was a solo shot. His average on the year isn’t much better at .223, although his power has been there with 11 home runs over 227 plate appearances. Sal Perez has a ton of mileage on him for a 28-year-old, so is there cause for concern or should we expect him to round back into form?

Perez’s power isn’t quite where it was last year, with a .194 ISO in ’18 versus a career-high .227 mark last year. He posted a career-high 53-percent pull% to achieve those homers. Thus far he’s a shade under that at 49 percent, but still well above his career 45-percent rate. The result has been massive gains in hard contact; 38% last year, and now a whopping 46 percent this year. That ranks him 18th in all of baseball in hard contact rate (min. 220 PA). Not too shabby. He puts a ton of balls in the air at 45 percent, so his homer count could escalate quickly in the coming weeks.

Which batters are hitting the ball hard most often?

Unfortunately, a lot of pulled balls and fly balls can lead to an ugly BABIP. Perez’s BABIP sits at .221. The good news is that you should see better results moving forward. Like we just discussed, his batted ball distribution is similar to last year with a better hard contact rate. Last year’s BABIP was much more typical of what you should expect at .280. He’s actually been remarkably consistent with his BABIP’s, going .278, .270, .280, .280 over the previous four seasons. This .221 is a huge outlier, and moving forward you should safely expect a .250-.260 average with a bunch of power.

Everything else looks like the same ol’ Sal. If you make an effort to buy low on him, which isn’t a bad notion, there may be another perk as well. Typically Perez fades over the second half because the Royals have him catch far too many games. He gets worn out. Here are a few of his career numbers to back that up:

This year has the potential to be the exception to the rule since he missed most of April with his luggage injury. So, if you grab him now, you could be looking at a very good catching option for the duration of the season since he wouldn’t be worn out. The hype factor isn’t there with him like it would be if you were trying to trade for Gary Sanchez or Willson Contreras. Not only will he be easier to acquire, he could give you similar production the rest of the way.

Best Ball Draft Strategy: A Guide, Not the Gospel