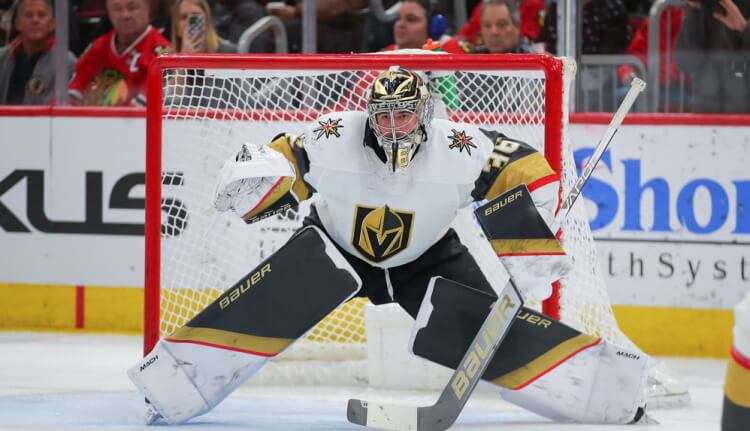 Hockey returned last week, so it is time for me to talk directly to you, goalie streamers, about who your best Week 2 goalie grabs might be.

With only a few games under our skates, it is hard to tell which teams are where this season, so I will be using a lot of goalie data from last year. For goalies who switched teams, I will be aggregating the data of their new teams’ defensive stats from last year and the independent goalie stats overall. Last but not least, I will be guessing to a degree, and I will make sure to tell you when there is more “guessing juice” involved than not.

I will do my best to keep the rostered percentages near or below 50%, lest I tell you all to grab Igor Shesterkin and have you leave, never to return for my expert insight. (The rostered percentage may be slightly higher for the first few weeks until things normalize in leagues.)

May your saves and wins be plentiful, and your Really Bad Starts (RBS) remain on waivers. Welcome back, hockey fans! I’ve missed you.

What?! You’re not using Fantrax for your fantasy hockey league? Check out our Fantasy Hockey Commissioner and find out why you should be next season.

According to Yahoo leagues, Logan Thompson is somehow still available in 83% of leagues. If you play in one of that other 17%, he should be the top priority grab for Week 2 and beyond.

Carter Hart has begun his fifth NHL season in stellar fashion, posting two quality starts* in his first two outings. While this lineup of opponents is certainly no cakewalk, Hart has a decent track record against them in his career. Philadelphia has shown some acumen in stopping goals, currently ranked tenth in the league’s simple rating system metric (though obviously a very tiny sample size). Hart is the clear starter, with Felix Sandstrom serving as backup. The primary downfall with streaming him this week is that this set of games is a “2-and-2,” meaning both are back-to-backs. Typically, that means goalies will sit in one of the two in each grouping. Still, Hart has started strong, and I think he can earn a couple more quality starts, making him a great Week 2 goalie grab.

Typically, I wouldn’t love streaming a goalie who has four road games, and it’s important to note that I don’t love Reimer here. But these aren’t long road miles, and only the NJ/PHI duo is back-to-back. In his first two starts, the 34-year-old has allowed five total goals but picked up both losses. Volume is king, though, and he has stopped 61 of 66 shots to start the season. San Jose has given up the fourth-most shots so far, so Reimer will definitely boost the saves category for fantasy managers. Aside from the Rangers out of this group, I’m not terribly intimidated by the opponents, and I foresee him ranking in the Top 10 in total goalie points at the end of the week.

The former St. Louis Blues netminder kicked off his Red Wings career by saving 29 of 29 shots for a shutout win over Montreal. This is not a new development. The 27-year-old finished last season with a .919 save percentage while maintaining a 2.56 GAA. Detroit is bound for some learning curves, including on defense, but they are vastly improved from last season in this area.

One important note: All three Detroit games are spaced out nicely, meaning Husso has a chance to get three starts this week. Streamers need volume, and nothing about any of these opponents should deter fantasy managers from grabbing Husso and holding him until further notice. He is also at or near the top of my goalie trade targets.

I’m around all season to discuss all the fantasy hockey happenings and start/sit questions, and I post some DFS line suggestions daily on Twitter at @thewonkypenguin. There is money and glory to be had in fantasy hockey, my friends. Let’s have a great year in both. And, as always, good luck!