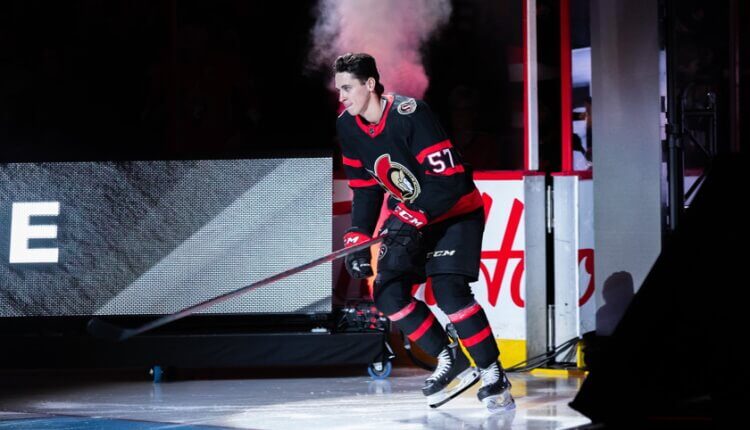 As the third week of the season gets underway, we’re already beginning to see some key aspects unfold. Some players are breaking out, while others are on the shelf with injuries. Whether you need to replace an injured player or pick up a hot player before he’s gone, the waiver wire is here to help.

Kubalik is off to a fantastic start. He’s racked up four goals and 10 points through six games. He’s playing on the top line with Dylan Larkin and Lucas Raymond, while also getting minutes on the top power-play unit. Kubalik had just 32 points in 78 games last season – the lowest production of his young career. Remember he did score 30 goals in his rookie season, so maybe we see him reach that total again. There’s a good chance he’s already been scooped up by another manager in your league. If you still find him on the waiver wire, better pick him up now.

Pinto is lighting it up, scoring a goal in each of his past five games. The 21-year-old rookie centerman perfectly encapsulates the exciting style of hockey we were expecting from the Senators this year. Pinto’s six points is tied for most points by a rookie. He should continue to see middle six minutes and spend time on the team’s secondary man advantage. It’s early, but getting a potential Calder Trophy dark horse off the waiver wire could pay off.

After posting 33 points in 76 games last year, Heinen is off to a fast start. Through seven games he has three goals and three assists, with a couple of those points scored on the power play. The Penguins are without Jake Guentzel and Jason Zucker. While Heinen was a decent waiver wire addition as a third liner, he’s even better as a second line player. Especially when playing with Evgeni Malkin. The Penguins have won every game that Heinen has scored a goal or assist in, and I expect Heinen to help get the Penguins many more wins this season.

This one’s for the really deep leagues. Noesen is a 29-year-old journeyman who’s played 212 games across his career, starting back in 2014-15. The most he’s played in a season is 72 contests back in 2017-18 with the New Jersey Devils. He’s played just eight matchups over the past two seasons. The main takeaway is that it’s unlikely he’ll play a ton of games. So why is he on this list? It’s because he’s playing on Carolina’s top power-play unit. He’s picked up a pair of power-play assists, and added two more helpers to have four points in five appearances. The Hurricanes are deep, so playing on their fourth line still yields decent results. Noesen is worth grabbing from the waiver wire until Ondrej Kase returns from injury and reclaims his spot on that top unit.

Montour is coming off a career-high 37 point campaign. It was a promising first full season in Florida. Now he’s building off that, notching four points in his first five tilts. The Panthers top defenseman Aaron Ekblad is on injured reserve. When Ekblad was injured last year, MacKenzie Weegar filled in his role. With Weegar traded this past offseason, Montour now becomes the top D. He’s averaging 24:54 of ice time, the most of his career. He’s playing top pair and top power-play minutes. He’s in a prime position, and his fantasy production will surely reflect that as the season progresses.

Ekman-Larsson disappointed in his first year as a Canuck, posting just 29 points in 79 games. Despite his team’s results, this year he’s off to a better start, with four points through seven outings. Vancouver’s top offensive defenseman Quinn Hughes is out week to week. Similar to Montour, that leaves Ekman-Larsson as the go-to guy from the blue line, and places him on the top power-play unit. It’s quite possible we see him have a bit of a bounce back fantasy-wise, at least until Hughes returns.

Xhekaj is winning over the support of Canadiens fans and fantasy managers alike. He’s producing points while also playing a physical game. The defender has collected three points in seven meetings, while posting 15 PIM, 27 hits, 11 shots, nine blocks, and a plus-2 rating. He’s doing a bit of everything out there. The undrafted 21-year-old is receiving a decent amount of ice time, averaging 15:11 per game. I wouldn’t count on the offense staying at that pace, but the physical parts of his game should certainly continue.

Fantrax was one of the fastest-growing fantasy sites over the last few years, and we’re not stopping now. We are the most customizable, easy-to-use, and feature-rich platform in the industry, offering the greatest fantasy experience for your dynasty, keeper, redraft, and best ball leagues. Fantasy sports doesn’t sleep, and neither does Fantrax, with seasons running 365 days a year. Take your fantasy leagues to the next level now at Fantrax.com!
fantasy hockey waiver wireIt's never to early
Share