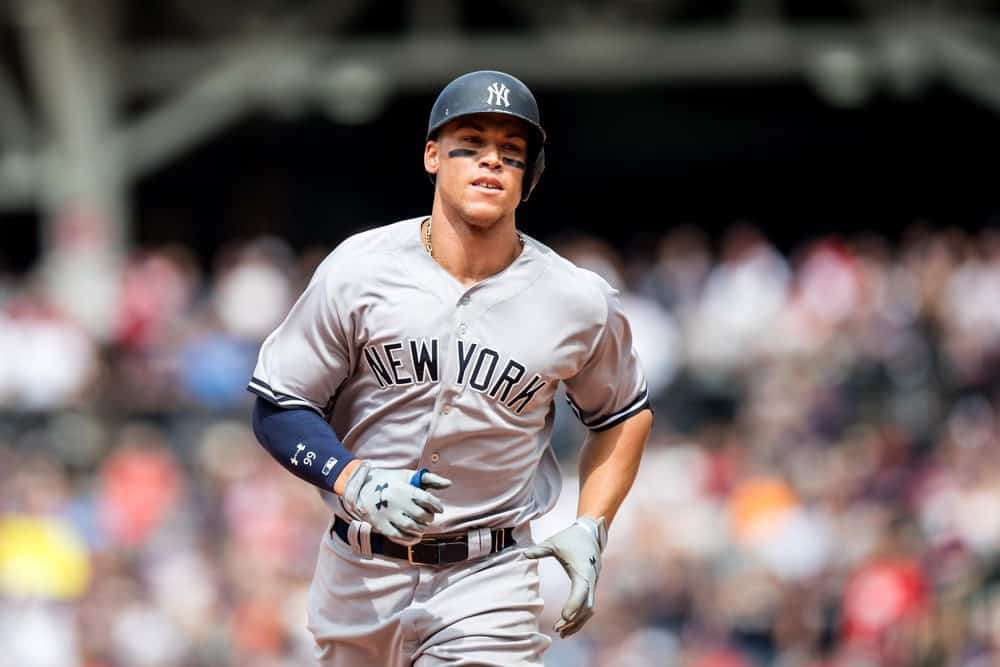 Before we get to the rankings, there are a few questions and observations to go over.

Can Anyone Pass Mike Trout and Bryce Harper?

Yes, but it will be incredibly tough. As it stands today, I see only two players with the potential to take over the #1 spot in dynasty leagues.

Carlos Correa – This kid is already a fantasy monster, and he’s not even 23 years old yet. He’s unquestionably the top fantasy shortstop and would be my #1 guy overall if Harper and Trout didn’t exist. Correa has the potential to put up many .320-40-120-120-20 seasons. Minus the steals, he was on pace for one of those seasons this year before his thumb injury. The scary thing, unless you own him, is that he’s still getting better.

Aaron Judge – I’ll get into more about Judge below, but if he can turn into a .300-50-130 annual threat with some steals mixed in, he might be able to be the top dog in fantasy. However, I’m skeptical the batting average can be that high.

There are only five catchers and relievers in the top-100.

In most normal leagues, relievers just don’t carry as much value as the rest of the positions. And like I mentioned in my reliever rankings article, there’s just so much turnover year to year. Two of my top-10 dynasty relievers (Corey Knebel and Raisel Iglesias) weren’t even closers at this point last year. Not long before that, Edwin Dian, Ken Giles, and Roberto Osuna weren’t in the closer mix.

[the_ad id=”384″]That’s half of the top-10 that have entered the discussion within the last few years. With the turnover rate so high, you can find an elite closer a lot easier nowadays. That alone makes it harder to keep a closer at the expense of a young outfielder or solid middle infielder.

On the other hand, a catcher’s value is low simply due to lack of consistent production. After the top five, it gets bad in a hurry. That likely isn’t going to change anytime soon, either, with only Cleveland Indians farmhand, Francisco Mejia, looking like a future offensive catching star. The position as a whole is more focused on defense and game management, and that makes it difficult to find top dynasty options.

The sport of baseball is getting younger as the years go on. More and more elite prospects are getting to the majors at an earlier age and thriving right away. Take Correa, for instance. He made his debut at just 20 years old and immediately became a superstar. Now 22, Correa finds himself as the third most valuable dynasty player in my top-300 overall rankings. Both Trout and Harper dominated during their early twenties and look poised to continue that in their mid-twenties. The moral of the story here is don’t shy away from the youngsters.

Rafael Devers (3B – BOS) – Devers is the latest example of an elite prospect coming up and mashing right away. Still only 20 years old, his arrow is pointing straight up and could join the elite ranks soon. When you combine a plus hit tool and plus power, good things usually happen.

Aaron Judge (OF – NYY) – We all should have seen this coming to a degree. Maybe not that he’d be leading the AL in home runs during his rookie season, but his size and home ballpark hinted at this. I ranked him 10th overall, and that might be a tad high for a rookie, but I’m a believer that this can continue long-term. However, I think his average will settle into the .280 range, which will keep him as more of a back-end top-10 option.

Cody Bellinger (1B – LAD) – A lot of the attention this year has been on Judge, but Bellinger has been just as good out on the west coast. His average (.264) has been lower than Judge’s, but in the long run, I see their values being pretty similar overall. Bellinger could be the #1 first baseman very soon.

Josh Donaldson (3B – TOR) – It looks like Donaldson’s run as an elite first-round talent is over. He’s still a top-five option at the position right now, but there are a lot of good young options breathing down his neck.

Xander Bogaerts (SS – BOS) – Bogaerts is an incredible player, but he just doesn’t have enough thud in the power and speed categories to be an elite fantasy shortstop.

Byron Buxton (OF – MIN) – Not all top prospects pan out. There’s still time for Buxton to become a viable fantasy option, but it’s becoming obvious his ceiling isn’t as high as most had thought.

Kyle Schwarber (OF – CHC) – This might be pointing out the obvious, but you’re not going to be a valuable fantasy asset with an average below the Mendoza line. His power will always keep him on the map, but the pathetic average makes him hard to trust.

All right, enough chit chat. Here are the rankings. Enjoy!

Thank you for reading another edition of Dynasty Dugout on Fantrax. I hope you can use this article to your advantage and get a leg up on your fellow league members. Check back next week for another article. Got a question about a player not covered here? Ask in the comments below or follow me on Twitter @EricCross04 and ask there.