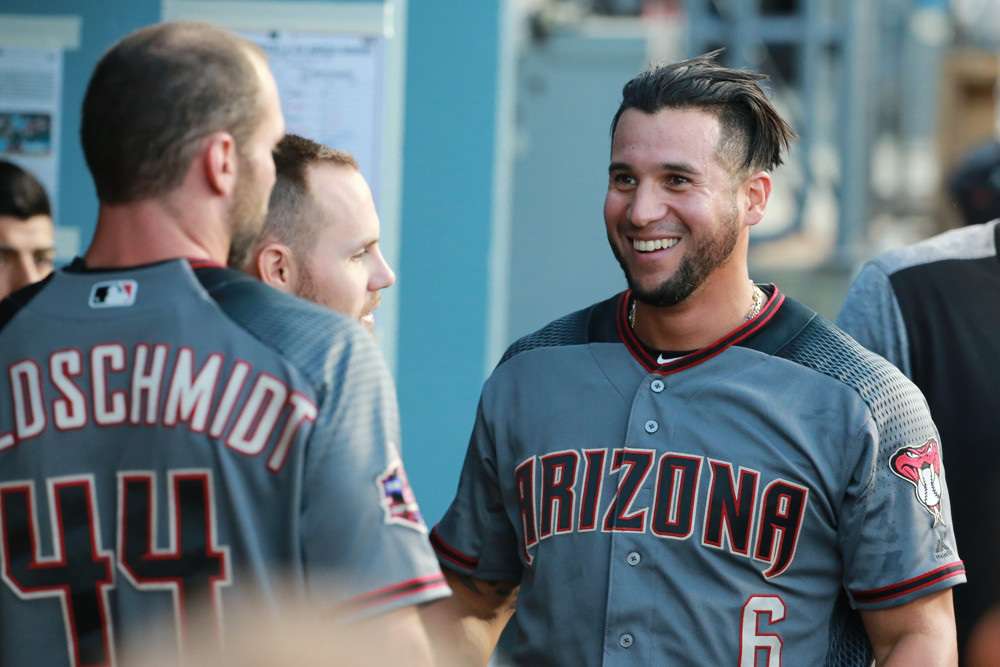 The MLB trade deadline has come and gone and soon the same will be said of your fantasy league. Maybe it’s passed already for you, but this is the last call for most of us to do our buying and selling. Check your standings, address your team needs, and forget what you paid for them way back on draft day. Names mean less than value now with only about seven weeks left in the season. Don’t be afraid to trade the bigger name for a piece that will help you gain a handful of standings points. Reach for that eternal glory!

It’s been a season full of late-career breakouts. We’ve seen players like Max Muncy, Ross Stripling, and even some other players who don’t play for the Dodgers come out of nowhere to jettison into fantasy relevance. Among them, perhaps the latest career breakout at 30 years of age has come from David Peralta.

Peralta has been overshadowed because he hasn’t posted gaudy power numbers, but his overall value needs to be appreciated. On the season, he has 19 home runs, 58 RBI, and a .306 batting average. What really urged yours truly to dive into his emergence, however, is his incendiary August. Through seven games this month, Peralta is slashing .545/.559/.970/.1.529 with seven extra-base hits. Obviously this is Small-Sample Fun Time (don’t worry, we didn’t book any clowns), but nevertheless, it’s an effective carrot that was dangled in front of me.

The power spike is no August mirage; it’s been a part of his game all season. His .218 ISO is the highest of his career, if only by a small margin over his 2015 .210 mark. Fueling it is (by far this time) a career-high 46% hard contact rate compared to his career 36% rate. He hasn’t sacrificed any contact ability to gain the new power either, with an 80% contact rate that is right in line with his career mark.

Some of his surprising season can be chalked up to improvements against left-handed pitching. On the surface, the .244 average against lefties this season is far from impressive. However, his 39% hard contact rate against lefties is by far a career high, and he’s seeing more plate appearances against southpaws as a result. The increase in playing time pushes him from deep league platoon-bat territory into mixed league relevance.

David Peralta has also made improvements on breaking balls since last season. In 2017, on 560 breaking balls, he hit for a mere .277 wOBA with a .267 xwOBA. He overperformed! This year? On 428 breaking balls, he has a .471 wOBA with a .393 xwOBA. He’s still overperforming! That matters a lot less though when your expected wOBA is more than .100 points better than a year ago. These improvements have helped him achieve a top-25 exit velocity in baseball and a career-high 7.8% barrel rate. It also soothes the soul that you don’t have to worry about teams shifting on Peralta. He’s been shifted just 3.4% of the time this year thanks to a nifty all-fields approach.

Not everything is quite as good as it seems, however. His 20.2% HR/FB rate is pretty grossly inflated. He hits just 29% fly balls with a 39% pull rate, and that batted ball profile doesn’t lead to a lot of power. The all-fields approach helps keep the over-shifts away but hurts the power profile. David Peralta is a solid all-around player, worthy of a roster spot in pretty much every mixed league. Just don’t expect him to carry your team in the power department.

If one were to cast Nicholas “Don’t Call Me Nick” Castellanos as a Batman villain, he’d be perfect as Two-Face. From the start of the season to the end of June, he was an upstanding District Attorney in Gotham City, slashing .309/.356/.517 with 12 home runs. Someone must have tossed acid on half his face at the beginning of July, however, because since then he’s been villainous to your fantasy team. Over his last 30 games, he’s hitting just .222/.283/.385 with four homers. Which side of Harvey Dent…err, Castellanos can we expect over the rest of the season?

Looking at his quality of contact lends us quick reassurance that, at the very least, Castellanos hasn’t fallen off a cliff. His hard contact rate through the end of June was an incredible 49%. Since then? 45%. Down a bit, but nothing truly startling. Lending further assurance is a 28% line drive rate, assuring us that he isn’t just beating the ball into the ground. However, on his 32 ground balls in play since July 1st, he has a .156 average. He has been pretty unlucky with those grounders since the MLB average is .235. Overall, with 45% hard contact and 28% line drives, he deserves much better than his .282 BABIP in that stretch.

What is a bit concerning is that he seems to have lost his grasp of the strike zone. 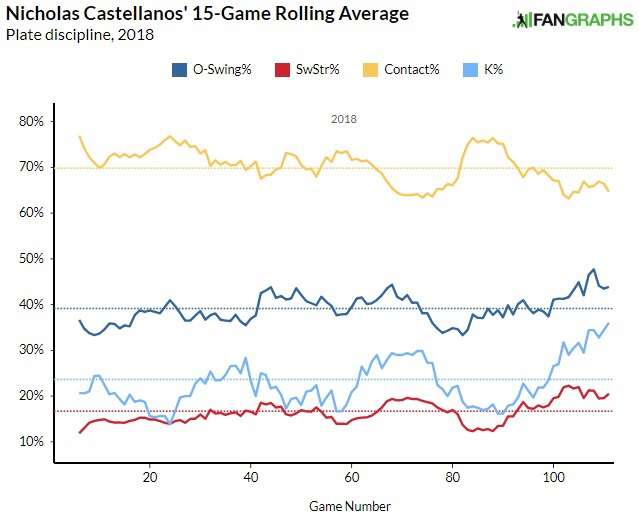 His contact rate has never been a strength, but over these last 30 games it has plunged down into the upper-sixties. That’s the beginning of the real danger zone when you’re talking about contact rate. His swinging strike rate has rocketed up towards 20%. That is terrifying. It’s no surprise that he’s chasing more balls out of the zone here, as that is a likely culprit for the poor contact.

The strikeout rate in this span is 28% – a far cry from the 20-21% we saw in 2017, and also this April and May. While the strikeouts will definitely negatively affect his average, the deluge of hard-hit balls should be enough to overcome the K’s more than we’ve seen recently. He’s definitely out of sorts at the dish right now, and there’s a chance he doesn’t correct it by the end of the season. Even if that is the case, he’s worth holding on to in any league 12 teams or deeper. However, you might want to find a bench spot for him for the time being.