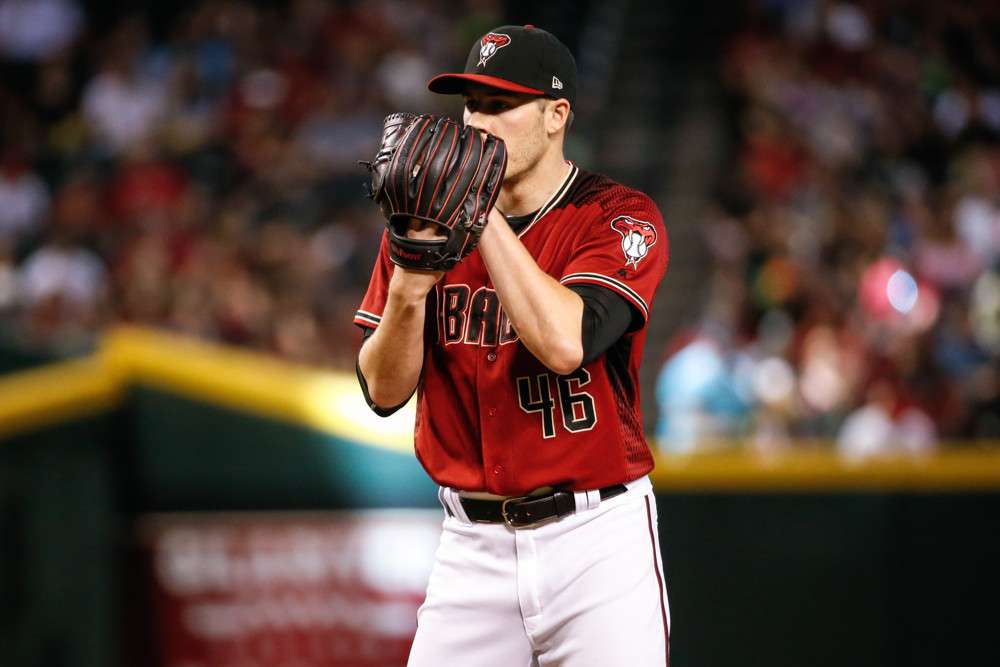 Here I begin my Course Correction series, profiling players that notably over- or under-performed expectations in 2017. However, I also reserve the right to just bring up some players that I am really interested in … don’t judge me too harshly. We’re going to start on the mound with a player whose career has been a real roller-coaster ride, and that is Arizona Diamondbacks starter Patrick Corbin.

On a more micro level, Corbin had a really great stretch in 2017. Over 68.1 innings from July-August, Corbin posted a 2.77 ERA with a 76:18 K:BB ratio. That translates to a 20.2% K-BB%, which, over the course of a full season, would place him top-15 in MLB. Of course, plenty of pitchers have great stretches like this, so did anything actually change or was this merely a blip on the radar?

I like to think that Patrick was out at a chain restaurant one day, having lunch with a friend, when that friend said to the server, “I’d like more sliders, please.” Referring to tiny, delicious cheeseburgers, of course. Then it struck Patrick — that’s a great idea! More sliders! He then followed suit and ordered more sliders. After consuming the tasty morsels, he sat back, belched, and realized that more sliders on the mound might be a good idea, as well. He henceforth increased his slider usage nearly 10% from July to August, all the way up to 46%! It’s not a bad idea considering the slider is his best weapon. Consistently grading out as one of the best sliders in baseball, in 2017 it garnered 22% whiffs with 51% ground balls, and opposing batters hit just .188 off of it. The slider doesn’t account for his July production, however, since the deployment of that pitch in July remained consistent. Instead, during July he dropped his sinker usage nearly 13% and practically doubled the use of his changeup, from 9% to 17%. Looking at his pitch mix by month, we can see that his success in July and August coincided with this drop in sinker usage and an increase in offspeed pitches. 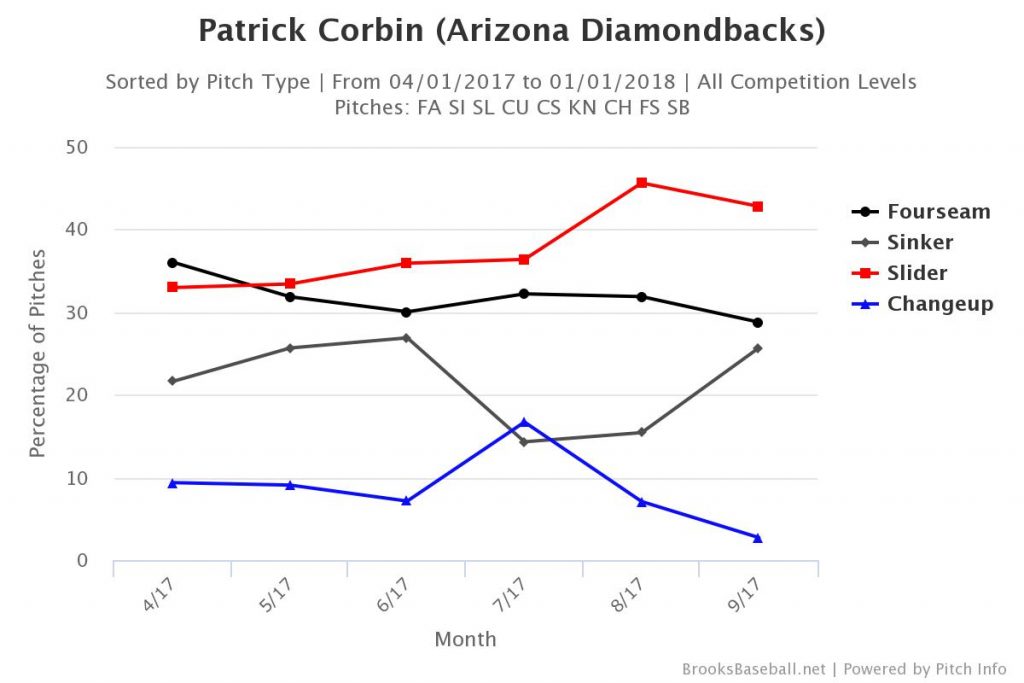 He was also more confident in the use of his slider against right-handed hitters as the season went on, pushing his usage up to 43% and 39% over August and September, respectively. Corbin has always had strong command, and the ability to place his slider where he wants it against righties so it doesn’t get crushed would be a huge boon to his value. Here’s a GIF of his treachery against poor Kelby Tomlinson in August:

Corbin’s changeup also bears mentioning. It’s not a great pitch by the numbers, but he did manage to increase the velocity gap between his fastball and changeup from 2016 to 2017. While his average fastball velocity increased from 91.7 MPH to 92.4, his changeup velo fell from 84.7 to 83.6. That’s a gap increase of 1.7 MPH, which is quite a bit when trying to make a below average pitch more useful.

Now, the bad. Why are we looking at a two-month stretch over the second half of 2017 rather than the entire second half? It’s because his September was … not good. While his slider usage was still very high at 43%, he practically scrapped his changeup in favor of his sinker, which he brought back up from 15% in August to 26% in September. His ERA jumped up to 4.70 and his K-BB% dropped to a minuscule 5.3%. This is what makes Corbin a bit of a confounding case heading into 2018 drafts and will probably keep him off of a lot of sleeper lists … but not mine! I’m going to give Corbin a mulligan for his final month. It was his first full season without an innings limit after his surgery, so anecdotally it stands to reason that he was just plum tuckered out down the stretch. His four-seam velocity dropped nearly a full mile per hour from his final August start to his final September start, so there is at least some reason to believe this could be the case.

Some of Corbin’s 2017 peripherals show us a player that was also a bit unlucky, but regressing those numbers is a dangerous game. His BABIP was .326, a mark high enough to rank him seventh in MLB among qualified starters. However, the defense behind him isn’t great, and Chase Field is one of the most hitter-friendly parks in the league. Neither of those things appears likely to change heading into 2018 (unless Chase Field actually does implement the use of a humidor, in which case I’d like Corbin even more). He also had a well above-average 15.3% HR/FB%, high enough for 16th among qualified starters. That also won’t necessarily change, since A) his career HR/FB% is 13.8%, and B) he still pitches in Chase Field, which is the fourth most homer-friendly park in baseball, according to ESPN’s 2017 park factors.

Heading into 2018, there is no reason to believe Corbin can’t approach the 200-inning mark. If he continues the increased use of his slider, he could push 200 strikeouts, as well. With a little good fortune in homers and BABIP, he could shave his ERA from around 4.00 closer to 3.50, in which case you would be looking at a borderline No. 2 starter. It’s still very early in draft season, but his Fantrax ADP is currently SP72, overall 260.73, which is ludicrous. He’s behind Chad Green, who is most likely going to be a long reliever. I’d comfortably draft Corbin as a top-50 starter, 70 picks higher.