Amidst all the news regarding Giancarlo Stanton home runs and Aaron Judge’s growing streak with at least one strikeout per game, can Michael Conforto’s breakout be overshadowed in his own city? Apparently so, but while Judge stamps his fantasy approval rating despite his recent swoon, Conforto has made adjustments following his horrific June, which led his own manager to suggest he looked tired.

Of course, Terry Collins also buried Conforto in April despite admitting a 30 home run season lurks within his talented outfielder four months later. Statistically, Conforto reaching 30 home runs this year is going to happen. He’s averaging a home run every 15.5 plate appearances through 99 games, with 26 home runs already this year. Heck, Conforto could reach and eclipse 30 by the end of the month.

With many turning their thoughts toward the NFL preseason and draft month for fantasy football, it’s also time to note players breaking through at this time of year in order to set their value for next year’s drafts. With this in mind, can Michael Conforto become a top-20 fantasy hitter in 2018?

Using the flawed but easily accessible ESPN Player Rater, Michael Conforto ranks 48th overall among hitters and 28th among outfielders. For the second half, his numbers rise to 26th overall and 14th at his position. Not too bad for a 24-year-old who did not break camp as a starter. Through 99 games, Conforto is hitting .285/.392/.576 with 69 runs, 26 home runs, 64 RBI and two stolen bases. He’s on pace for 137 games, 97 runs, 37 home runs, 90 RBI and three steals, which seems very enticing if he can maintain the .285 average.

With Giancarlo Stanton hitting a home run virtually every game of late, Conforto’s hit the second most (12) since the All-Star break, trailing Stanton by four. Conforto’s isolated power in the first half of .258 increases to .357 after the break, also boosting his weighted runs created plus by 15 points. During the second half, Conforto ranks seventh in isolated power, 11th in slugging percentage (.643) and 16th in weighted runs created plus. Over 29 games after the break, Conforto has scored 22 runs, hit 12 homers and drove in 23 with a .287/.369/.643 slash line.

3. Not your normal power hitter

Most power breakouts can be associated with a player becoming more aggressive at the plate and pulling the ball more often. However, like Alex Bregman last week, Conforto can drive the ball to all fields. For the season, Conforto pulls the ball 32.5 percent of the time, with 39.2 percent of his balls in play up the middle and 28.3 percent to the opposite field. In spite of this, his hard contact’s up to 40.8 percent this season.

Delving deeper into his splits this year, Conforto owns a .471 isolated power hitting the ball the opposite way with a 1.353 on-base plus slugging and a 38.2 hard contact percentage. If Conforto chose to pull the ball more, he’s recorded terrific results, with a .526 isolated power on balls in play to his pull side with a 1.397 on-base plus slugging along with a 52.6 hard contact rate. For a visual, here’s his spray chart this year courtesy of MLBfarm.com: 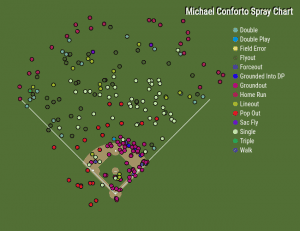 In order to appreciate his ability to hit the ball to all fields, this chart from the same site highlights Conforto’s hits by field in a bar graph: 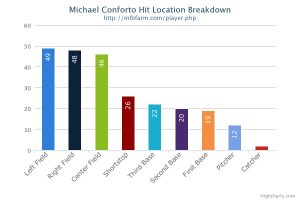 It’s rare to notice a hitter who can drive the ball to all fields effectively and could even see an increase in power next year simply pulling the ball, but Michael Conforto fits the bill.

4. Can Conforto adjust to left-handed pitching in the majors?

Here’s the $64,000 question. For his career, Conforto struggled facing southpaws in the majors due to a rough start in 2015 and 2016, resulting in a .185/.257/.338 slash line and a .152 isolated power. This year, he’s shown signs of improvement with a .225/.303/.472 line. On the surface, it’s not great, but Conforto’s at least hitting for power against left-handed pitching when in the lineup. Collins almost used Conforto as a platoon player early in his career, but injuries and trades now require Conforto to play full-time.

Conforto has hit six home runs this year in 99 plate appearances against left-handed pitching, which qualifies as something. He’s also increased his weighted runs created plus this year to 104 with the league average being 100 in this metric. During his last two seasons in the minors, Conforto did produce versus southpaws. Take a look:

Trying to predict whether Conforto can achieve his minor league slash lines at the major league level seems arduous. However, thinking Conforto can adjust and hit a bit better providing room for improvement in his batting average in the future could be likely using the data above. There’s only one way to improve against southpaws in the majors: face them. Conforto’s making strides, especially in the power department, and his ability to hit the ball to the opposite field should allow him to make strides against left-handed pitching as well.

Projecting Michael Conforto for 2018 will come with some difficulty, but knowing he’s a fixture in the Mets lineup and potentially hitting third or fourth next year will impact his production. With 47 games remaining on the schedule entering game play on Monday, Conforto’s current paces this year for 137 games could easily translate to his 2018 projection. But, with a full season of at-bats, improvement against southpaws and his burgeoning power component, there’s room for growth.

It’s going to be difficult to predict Conforto hits 40 or more home runs next year due to all of the variables that can befall a talented young player. However, Conforto’s shown the ability to play through an awful month, seen in his June splits, improve at the major league level and stay humble. He does not wish to talk about 30 home runs this year in spite of hitting 26 already.

Conforto’s homered three times in the last four games and hit 12 during 29 games since the All-Star break. Cody Bellinger and Aaron Judge may garner more attention as rookies of interest heading into 2018 drafts, and rightly so. Just do not forget how good Michael Conforto’s been as well. He may be just scratching the surface of his fantasy upside and shifting to the heart of the order next year for the Mets could seal the deal.