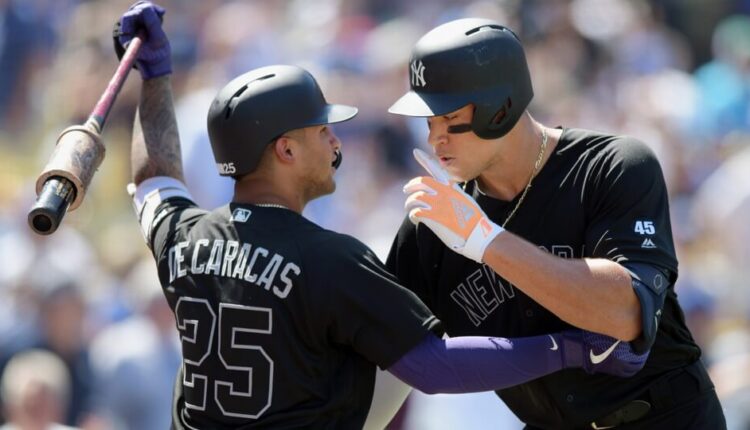 In an incredibly deep and talented position, is there still value in the end game? Justin Dunbar identifies the top shortstop sleepers for the 2022 fantasy baseball season.

Where are fantasy baseball drafts won?

Some will say it comes with getting your stars in the early rounds. However, for me, it’s later in the draft that separates the winning teams from the rest of the pack. Being able to find key contributors when others can’t, gives you a much deeper roster- the type that can keep pace in several categories over a long season.

Remember when shortstop was a barren offensive position? Well, that’s not the case anymore! The position is filled with talented offensive producers, many of whom also steal bases. This strengthens the shortstop pool significantly, leading to skilled players falling down the draft board.

All of these shortstops are currently being drafted past pick 150, yet could provide strong contributions for your team next season. From this day on, we shall no longer sleep on these four players! Who are they? It is time to officially wake up!

ADP via NFC.com (Since December 1st)

Remember when Gleyber Torres looked like a future superstar after slugging 38 home runs with a 125 weighted-runs-created-plus (wRC+) as a 22-year-old in 2019? Those were fun times.

Since that magical 2019 season, Torres has been a below-league average hitter (97 wRC+), and has lost all of the power with a .111 isolated power (ISO). For perspective, he hit just NINE home runs in 2021. How does one go from the elite slugger that Torres was to someone who fails to hit double-digit home runs in 516 plate appearances? It is a great mystery that we must solve.

Fortunately, there is reason to be optimistic about Torres’ outlook moving forward. As it is, Torres’ 7.8% barrel rate isn’t great but suggests a lot better than a .107 ISO. In fact, his nine home runs on 28 barrels (32.14%) ranked near the bottom of the league in terms of “home-run luck”, and I could easily see that improving in the future; his HR/FB rate (6.9%) should not be lower than his barrel rate.

Plus, after a poor start to the season, Torres quietly started to get his season back on track. From July on, he posted a 10.5% barrel rate, and raised his ISO to .153 despite a subpar 9.7% home run/fly ball rate; he also raised his wRC+ to 110 in that span. It’s unclear why Torres wasn’t able to take advantage more often in playing in such a hitter-friendly park, but I would expect that to change in 2022. After all, I seriously doubt that a player just forgets how to hit for power!

Plus, Torres also started to run more often in 2021, stealing 14 bases on 20 attempts. If that is also going to be an aspect of his game moving forward, then his profile becomes more complete. We can bank on a solid batting average with the ability to drive in runs being a part of a deep Yankees lineup, as well as a likely 10+ stolen bases in 2022. Now, will the power come back as well? That’s the hope, and how he ended the season is remarkably encouraging. He’s made some major strides to his plate discipline, and this season may be the year it all comes together. If so, you’ll want him on your roster. If you fail to take a shortstop or second baseman early or simply need to fill your middle infield spot, Torres is a great option being drafted just after pick #150.

Once upon a time, Brendan Rodgers was considered one of the premier prospects in the sport. Per MLB Pipeline, he was their 9th-rated prospect in 2018, as well as their 14th in 2019. In other words, all expectations were that he would be an impact big-leaguer. Unfortunately, injuries have gotten in the way of that coming to fruition, but that should change in 2022.

To be fair, Rodgers was pretty productive last season. His .284 batting average was strong, while he provided enough power with a .186 ISO. Plus, it’s looking like he’s going to hit at the top of the lineup for the Rockies, which is going to do wonders for him in terms of scoring runs when at home.

In terms of hitting for average, I have a lot of confidence in Rodgers to potentially even push for a .300 batting average if all breaks well. With even sprays (30.8% pull) and a lack of pop-ups (3.9%), he is going to hit for a high batting average on balls in play (BABIP), especially at Coors Field.

Plus, I think there might be on the table for Rodgers in terms of hitting for power. He has posted a 112.8 max exit velocity already in his career, but his 50.8% ground ball rate led to just a 6.2% barrel rate in 2021. With the proper swing change, the home run upside as immense, adding to the extra upside that led to him being an elite prospect.

With a plus batting average, scoring runs at the top of the lineup, and around 20 home runs, Rodgers is bringing a high floor to the table. That being said, there’s extra upside here based on his raw power, prospect pedigree, and the ballpark he gets to call home. With eligibility at both second base and shortstop, you’re getting a player on the rise who already established a strong foundation in 2021. That is the type of player I want to be on. In dynasty leagues, now is the time to acquire Rodgers, and, if you’re in a standard redraft, he’s right up there with Torres as a strong value after pick #150. Buy in now!

A 6’7″ shortstop? That sounds exactly like something you would see in a video game. To be fair, Oneil Cruz has video game-esque upside.

Let us start off with Cruz’s production in the minors last season, which was off the charts. Between Double-A and Triple-A (mainly Double-A), he posted a .310/.375/.594 slash line in 305 plate appearances, stealing 19 bases as well. Notably, he cut down his strikeout rate to 22.8%, which is still high, but much more manageable; the whiffs are becoming less of a concern by the day.

Then, there is Cruz’s two-game major-league stint, where he managed to record an 118.2 MPH exit velocity, which ranks in the 99th percentile. Few hitters have that type of power, but Cruz does, and it shows based on his minor-league track record supports it. Cruz’s 17 home runs was the highest amount of his career, as was his 19 stolen bases. To see both his power and speed all come together at once is remarkable, and is especially important considering he did so in the upper-levels at the minors- where stats are more predictive of future MLB value.

Then, there is Cruz’s ATC projection, which includes a .267 batting average, 19 home runs, and 11 steals in just 468 plate appearances! Now, imagine if he was given the opportunity to play the full season. Right now, Cruz’s main competition for the shortstop spot consists of Cole Tucker and Kevin Newman; not exactly marquee names. I wouldn’t be surprised to see them have him on the opening day roster from the jump, leading to a potential 25-15 season from the 23-year-old.

In fantasy baseball, we always want to chase the shiny new toy off the block. Well, this is him! Cruz’s power/speed combination is tremendous, and he provides the rare all-around profile you’re looking for from a middle infielder. I wouldn’t be shocked to see him on the opening day roster, and, if so, he has a chance to be even a top-ten shortstop next year if he hits his ceiling. With a post-200 pick, that’s all you’re really chasing here anyways. Before his stock rises, make sure to make Cruz a priority later on in  drafts, and continue to monitor his ADP throughout the offseason. Santa might be leaving you a present here, and you won’t let to opt against it!

From a flashy hyped-up prospect to a veteran, shortstop sleepers come in all shapes and sizes! Before Gleyber Torres was entrenched as the Yankees’ shortstop, Didi Gregorius was the one who replaced Derek Jeter in New York.

Gregorius missed some of the 2019 season after undergoing Tommy John surgery and struggled after coming back, mainly due to a low .237 BABIP. After signing a prove-it deal for the Phillies prior to the 2020 season, he seemed to get back on track with a 116 wRC+, .205 ISO, and .348 weighted on-base average (wOBA). This led to Philadelphia giving him a two-year contract prior to the 2021 season, but it all cratered from there; he posted a 68 wRC+, while his power (.160 ISO) took a back step.

At the same time, Gregorius was dealing with a severe elbow injury, which caused him to be on the injured list for 49 days. Even then, it’s not clear he was healthy when coming back, meaning he was clearly hampered all-around by it. His 2.3% barrel rate was a career-low mark, while all of his quality of contact skills ranked below the 10th percentile.

Luckily, Gregorius isn’t someone who ever hits the ball hard consistently. Rather, he hits the ball in the air and does a great job hitting the ball right where it’s easiest to convert a batted ball into a home run; right down the line: This has been a common trend throughout Gregorius’ career. He’s in a great ballpark to execute this strategy, which should allow him to have a power bounce back if healthy. Meanwhile, his batting average can rebound with significantly better batted-ball luck (.217 BABIP), especially since I wouldn’t expect his career-high 16.4% strikeout rate to stick; he was clearly hampered by the injury and has shown clear contact skills before.

Add in the fact he’ll be hitting in a strong lineup, leading to RBI possibilities, Gregorius looks like a strong value as a sub-40 shortstop. General manager Dave Dombrowski has hinted that he’ll have to earn the job from prospect Bryson Stott, but considering the team is still contractually invested in Gregorius for this season, I would assume they give him the opportunity to bounce back. If so, he can be the same steady producer he was, but at a significantly lower price. You always want to buy into an asset, or a player in this case, at their lowest price point, and that is exactly what you’re doing here. If you draft Gregorius at his relatively free price, you’re just playing the stock market properly!