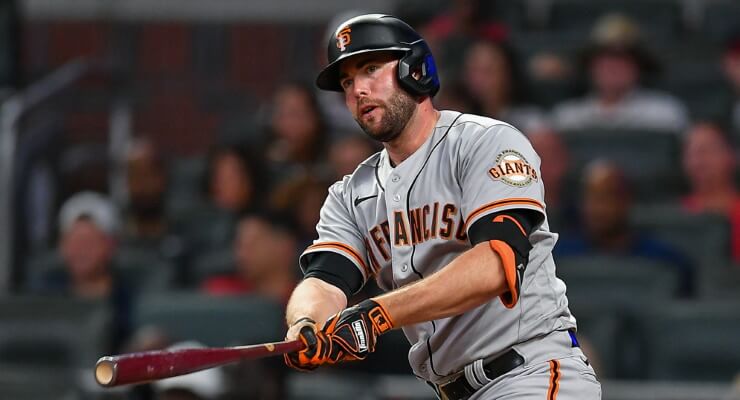 With regards to 2022 fantasy baseball prep, we tend to focus on the upper-echelon players. After all, the standard fantasy league isn’t incredibly deep, leaving several players unnoticed.

That being said, this doesn’t apply to all leagues. Particularly on NFC.com, there are several leagues lasting 50+ rounds, forcing fantasy managers to dig deep into their rankings to find a player worth drafting. The problem? If these players aren’t getting covered enough; it is very hard to make decisions about them.

Today, we are here to change that! These four players aren’t being drafted early in 2022 drafts at all, yet have a great chance of providing surplus value in 2022. If you’re trying to come out on top, these deep-league targets are perfect for you!

Draft data via NFC.com drafts since 12/1

For years, Yandy Diaz has felt like a massive “what-if” in terms of untapped potential. With a career 114.3 MPH max exit velocity and a lot of raw power, the 30-year-old has the capability to be a prodigious slugger. Instead, he has just .136 isolated power (ISO) for his career- quite underwhelming. 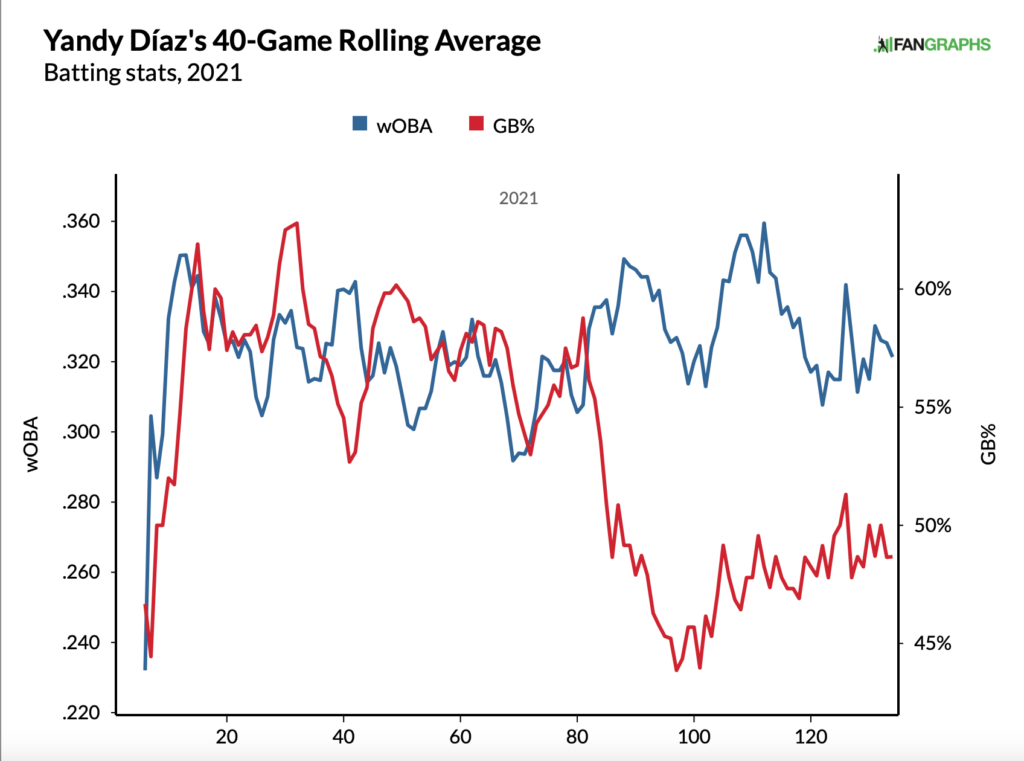 As you can see, Diaz’s ground-ball rate dropped significantly as the season progressed. From July 1st on, he posted a .203 ISO and 10.3% barrel rate, in addition to 10 home runs in just 242 plate appearances- a 22 home-run pace if you extrapolate out for a full season.

Meanwhile, Diaz is also likely to provide you with a solid batting average. His .256 batting average last year was plagued by a career-low 19.5% line-drive rate, but with some positive regression there, his batting average on balls in play (BABIP) should increase, leading to a batting average much closer to his .270 career mark.

While some may see him as simply a lefty masher, he did receive 541 plate appearances for a strong Rays team, including 274 against righties; he was able to post a 101 weighted-runs-created-plus (wRC+) against them, proving to be capable of handling them. Based on the current construction of the team, I don’t see that changing. If all goes well, Diaz can provide you with power potential and a productive batting average. If not, he still brings the batting average, on-base skills, and the playing time. If you’re in an OBP or points league, he gets a major boost, but even in standard deep 5×5 leagues, he’s someone worth taking past the 350th pick. You just have to have faith that it all comes together in 2022!

I discussed Connor Joe and his career arc while highlighting him a cheap source of on-base percentage:

“Once upon a time, Connor Joewas the opening day starting left fielder for the Giants. From there, he proceeded to post a NEGATIVE 47 wRC+, getting on base just twice in 16 plate appearances. Well, it looks like both he and the Giants organizations have come a long way since then!

To be fair, Joe’s minor-league production has been off the charts. Since 2018, he has posted a 145 wRC+ and .417 on-base percentage in the upper-levels of the minors, demonstrating strong plate discipline (14.8% BB) in the process. After signing with the Rockies prior to 2021, it was more of the same in Triple-A, posting a 165 wRC+ and .418 on-base percentage in 110 plate appearances.

This led to Joe getting another chance to produce at the major-league level. This time, he didn’t look back. In 211, plate appearances, he not only posted a .366 weighted-on-base-average (wOBA), but also hit .285 with a .379 on-base percentage. It was a strong enough performance for him to likely get another chance for a strong amount of playing time next season, though, based on his current draft price, many are wondering if he’s the real deal or not.”

Joe doesn’t just provide you with a strong batting average and/or on-base percentage, however. During his time in the minors since 2018, he posted a .233 ISO, and that power carried over to his time in the majors. He generated a 113.3 MPH max exit velocity, which ranked in the 89th percentile and he also produced a 9.9% barrel rate with a solid .184 ISO. Joe’s 33.3% ground ball rate ranked well below the league average, while he generated weak contact just 2.1% of the time. In other words, the power potential is definitely there.

Joe’s chances of having an everyday role increase significantly if there is a universal designated hitter. That would allow Charlie Blackmon to move to a DH role, allowing Joe to slot in as the everyday left fielder. With his on-base skills, it wouldn’t be a surprise to see Joe work his way up to the top of the lineup, which would be favorable in terms of scoring runs. A talented player in Colorado? Sign me up!

Remember when Clint Frazier was considered one of the top prospects in the sport and was the headliner of the Yankees’ trade of Andrew Miller at the 2016 trade deadline? Right after making the trade, general manager Brian Cashman described his bat speed as “legendary”, and all expectations were that he’d be a force in the middle of the Yankees’ lineup for the foreseeable future.

In 2020, it all seemed to be coming together. In 160 plate appearances, he posted a 149 wRC+, in addition to a .244 ISO. Sure, his 36.4% line-drive rate was going to be practically impossible to sustain. That being said, it was fair to see Frazier as a strong source of power heading into the 2021 season, though that didn’t come to fruition.

In 218 plate appearances, Frazier posted just an 83 wRC+with a .186 batting average and a .131 ISO. Meanwhile, he didn’t play after June due to a mysterious injury, and was later cut loose by the team this offseason. Now that he’s signed with the Cubs, he’s likely on his final stand to show he can produce consistently at the MLB level, making this arguably the most important year of his career thus far.

The good news? I’m optimistic about a bounce-back. Frazier still posted a 10.2% barrel rate last year but was impacted by a very unlucky 10.6% home-run/fly ball rate. The same goes for his .257 BABIP, which should assist in the batting average getting out of “liability territory”.

Now, there is something else that could assist in the batting average- fewer strikeouts. To do that, Frazier may need to be less patient at the plate. His 10.4% swinging strike rate was actually the lowest number of his career, but his 19% called-strike rate is quite high. Now, I’d expect a strikeout rate reduction just based on the fact that his called-strike + whiff rate (CSW%) was lower than it had been in the two seasons previously, but further aggression could lead to more power and fewer strikeouts.

Then, there is Frazier’s mysterious injury. According to him, he was dealing with concussion symptoms throughout the entire year. If so, this could explain his poor performance, in addition to poor luck. I’m willing to give him the chance to show that a healthier version of him can shine with a new team. New York isn’t for everyone, after all, and perhaps all he needed was a change of scenery. We know he should see some positive regression to being a passable corner outfielder. The question is: can he be more than that. That’s what I’d be betting on, especially if he’s going to continue to be drafted where he is currently.

What if I told you there was a player who posted a 144 wRC+ and a .248 ISO being drafted after pick #450 in 2022 fantasy drafts currently? Hopefully, that would pique your interest.

The story of Darin Ruf is quite interesting. After showing promise with a 125 wRC+ in his rookie season with the Phillies in 2013, he dealt with both injuries and struggles, and was off to play in the Korean Baseball Organization (KBO) in 2017. After dominating there, the Giants decided to give him a chance to re-establish himself at the MLB level, and he has taken full advantage.

Since signing prior to the 2020 season, Ruf has posted a 143 wRC+ with a .272 batting average and .246 ISO, along with 21 home runs in just 412 plate appearances. That sounds great, so why didn’t Ruf finish as a better asset in 2021? Simply put, he didn’t have enough playing time. He did miss some time due to injuries, but his 312 plate appearances were also an effect of being used as times as more of a left-handed pitching masher, as opposed to an everyday player. Making matters more complicated, with Brandon Belt playing first base and Ruf’s defense in the outfield questionable, there isn’t really a spot for him.

That could all change with the new Collective Bargaining Agreement (CBA), however. With a universal designated hitter, Ruf could be in line for significantly more playing time, allowing his efficiency stats to match up with his counting stats better. Against right-handed pitching last season, he posted a 126 wRC+, and the team down the stretch showed confidence in him getting critical at-bats against right-handers, making me confident the designated hitter spot could be his to lose if the rule is enacted. If that’s the case, his draft stock could skyrocket. This is a case where you can bet on talent, and just hope the opportunity plays out. By the looks of it, it’s a smart bet to make.

Fantrax was one of the fastest-growing fantasy sites of the last few years, and we’re not stopping now. With multi-team trades, designated commissioner/league managers, and drag/drop easy click methods, Fantrax is sure to excite the serious fantasy sports fan – sign up now at Fantrax.com.;