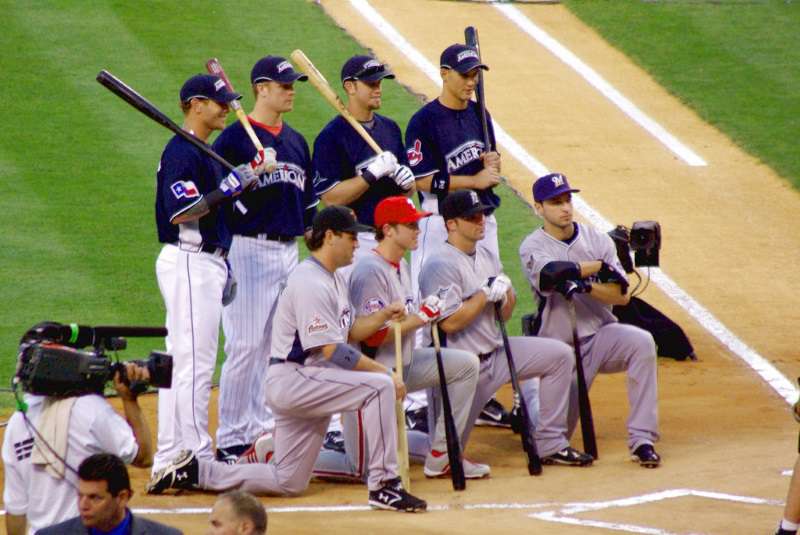 It’s that time of year again where people the country over are posting their ballots for the All-Star game. And while voting for the actual game is wild and possibly the worst way to handle it, the column for today is based much more on science and these fancy “stats” than just having rabid psychopathic fans voting dozens and dozens of times for their favorite player. Today we’re going to take a look at the opposite of All-Star and instead focus on players who are doing their best to destroy their fantasy (and real life) teams.

It’s also worth noting that some of these guys aren’t exactly lost causes… some could recoup value and provide a positive note for the rest of the year, and of course, some may just continue being a blight on their respective rosters. Let’s dive into it and see who is on the team!

Perez is doing that thing he does where he doesn’t ever walk, although this season it is even worse because he’s also not hitting for any sort of average. Oh yeah, and he also really isn’t hitting for power even though he does have 11 homers in 265 plate appearances. He’s the first on this list and quite possibly one of the most likely to bounce back. Between a career-low BABIP and the fact that his hard contact percentage is still great, there is still a lot to like here. Unless it’s an OBP league in which case I’m still avoiding.

Chris Davis has been the punching bag for analysts for the 2018 season. Between oddball stats and weird nuggets of information lies what is essentially an abysmal season. He has a slash line of .155/.232/.265 which only helps to show that even the things he generally does well aren’t there. He usually walks a decent amount, but his walk percentage is under 10 percent for the first time since 2012. He usually hits a lot of home runs, but his power outage is only continuing the downward trend we saw from last season (he’s on pace for about 15-18 homers TOTAL). And even the strikeout rate is getting worse sitting at 36.4 percent, which is several points above his 32.2-percent career rate.

There’s not much I can add here. He’s bad, he’s on the downward trend of his career, and he’s going to be making a lot of money while not playing baseball here soon.

I was shocked to see that the Red Sox have managed to toss Nunez out enough for him to accrue enough plate appearances to qualify, but here we are with our Anti All-Star starting second baseman. Nunez injured his knee in the playoffs last season, and though he and trainers have said there really isn’t an injury here, I’m certain that he’s not 100 percent healthy.

That’s not to say I expected a ton out of him, but for the last several seasons, he has been a power-speed combo. He’s managed a mere five home runs this season, and worse yet only four stolen bases. It’s shocking with all of their pieces that the Sox have leaned so heavily on Nunez, but I suppose when your offense is as good as theirs is, you can take a hit at a few positions. Since I don’t think he’s healthy this season I highly doubt a rebound, but maybe next year he can provide some late-round speed.

Has an Anti All-Star killed your Fantasy Baseball season? Why not hit the reset button? Head on over to Fantrax where you can draft a team 364 days a year.

There are an awful lot of Royals on this list, and perhaps more deserving of it than Alcides Escobar. Somehow he has amassed 319 plate appearances and in doing so has hit .191/.243/.270 with three homers and three steals. If somehow you ended up with him on your team at the beginning of the season (maybe you woke up after a four-year coma?), then you’ve born witness to one of the worst players in the Majors this year.

Even his defense has become very middling so he’s not really providing any value to the Royals, and has managed a -1.1 fWAR so far this season. The Royals need to put him (and their fans) out of their misery and cut him. Surely there’s a 25-year-old playing in low-A in their system that deserves a shot?

Moved to the bay in an offseason trade for Christian Arroyo and pals, Longoria has been a far cry from the steady presence he has been in past seasons. Last year was by no means a good year for Longoria, but he would kill to get back to those kinds of numbers. So far in 2018 Longoria is hitting .246/.278/.434 with 10 home runs in 270 plate appearances. His walk rate has fallen to only 3.7 percent and the power seems to have leveled out into the 20-25 home run per season range.

Also worth noting for the Giants has been his subpar defense, as his negative defensive value is only helping bring down his overall value thanks to the concurrent offensive dropoff. It’s worth noting that he’s the only player on this list with a positive fWAR, so that’s something at least.

I was kind of shocked to see Carlos Gomez take so long to find a Major League deal this past offseason, but it appears that wary teams were certainly correct in being hesitant to pass out a deal. The former first-round talent has only managed a .200/.274/.331 line with seven homers and four stolen bases, putting chances of even a 15-10 season squarely in the “not likely” category.

It is worth noting that his strikeout numbers have actually improved over the last two years, and a low BABIP along with decent hard contact numbers suggest that there could be greener pastures coming for Gomez. He’s 32, so he’s not too old, but also not young enough that I’m getting my hopes up.

It took until June 15 before Pirela hit his first home run in the 2018 season. He wasn’t necessarily regarded as a slugger or anything, but after hitting 23 homers in 545 plate appearances across Triple-A and the Majors last year his owners have to be pretty upset with his performance. His stolen base output is also down (four steals this season), so combined with a merely OK slash of .265/.314/.355 and horrible defense, his value has plummeted into negative fWAR territory.

He’s only 28, and you didn’t pay much of anything for him, so there’s a good chance he still provides you some value the rest of the way. The extra positional versatility helps too.

Former first-round draft pick and top-100 prospect Lewis Brinson has seen better days than what the 2018 season has shown him. He’s slashing only .187/.231/.342 with 10 home runs in 304 plate appearances, and the strikeout rate of 30.6 percent isn’t helping things at all. The bad news is obviously that he’s been atrocious while hitting, but there are a few silver linings we can focus on.

His defense has been solid for a young player and it is the sole reason he’s still in the lineup (though obviously, a refresher at Triple-A is probably a good idea, if only for him to get his head on straight). The power has been nice, and at age 24 there is still plenty of time for him to figure something out. If he can shave a few percentage points off the strikeout rate and get his walk rate up to 2017 levels, he could yet become a decent baseball player. I’m not ready to give up on him quite yet.

Despite his knees being terribly mean to him over the last few years of his career, Victor Martinez has managed to scrape out some value from his bat to help his Tigers club. This year all of that value has seemingly disappeared into thin air, and it’s a sad swan song for the once-feared slugger. He still walks a decent amount (7.1%), and barely strikes out (10.2%), so there’s a slim chance he provides some more offense in the second half of the season. This is almost assuredly his final year in the Majors though, and I would rather look back fondly on his career line of .296/.361/.457 with 241 home runs and remind you that most of those numbers came as a catcher.

It is borderline cruel that the White Sox are letting Giolito continue to pitch for the Major League team. His 6.59 ERA is the absolute worst mark of any qualified starter, and the second-worst ERA of 5.77 belongs to a starter whose team just sent him to the minors to work on mechanics and clear his head (Jon Gray).

Of course, ERA estimators are also not thrilled with what he’s doing with FIP, xFIP, and SIERA giving him marks of 6.06, 6.36, and 6.01 respectively. If you are still shuttling Giolito out there on your fantasy team you must enjoy the pain. I don’t think there’s much hope for the future either… he’s not striking anyone out (5.42 K/9), and his control has been mediocre at best (5.42 BB/9). It’s time to cut bait. Maybe someone in your league still gives him name recognition?

Some people early on were targeting Junis as a decent pickup with the opportunity to get some mid-rotation style innings and not kill your ratios. Only part of that sentence ended up being correct as he has managed to eclipse 100 innings so your team has had the benefit of quantity. Unfortunately, the quality has been lacking pretty badly here. Though Junis’ strikeouts are up a bit this year, he’s still striking out less than a batter an inning.

Also despite keeping the walks in check (2.48 BB/9) his WHIP of 1.29 shows just how often he’s getting hit. And if you’re giving up that many walks and hits while also posting a HR/9 rate of 2.12, your ERA is going to suffer. And suffer it has with a 5.13 mark in the season so far. The Royals need warm bodies in the rotation so he’s not likely going anywhere, but don’t expect much improvement over the first half’s numbers.

I swear I didn’t set out to make fun of the Royals today, it just ended up that way. Duffy had pieced together a couple of solid seasons coming into this year and owners can be forgiven for expecting some more of the same or even improvement. Instead of that, owners have seen a decreased strikeout rate, an increased walk rate, and just overall regression across the board.

Early on, some people were blaming the cold weather, others were blaming a potential injury, but you have to remember that there was bullpen risk here long before the success. I think that conversation needs to be brought back up because it appears once again that he just doesn’t have it to be a successful starter. The Royals will give him every opportunity in the world to get it together, but at some point, they will have to make a decision.

Obviously, the eligibility requirements go out the window for a relief pitcher, and since they are dealing with such small sample sizes it’s always possible they get things straightened out and with one solid run get the numbers back on track. With Neris that “one solid run” needs to be “two or three solid runs” because he has been pretty bad this year and currently finds himself down in Triple-A vying for the Anti All-Star team there.

There’s not a lot to be said about Neris; his ERA of 6.90 is somehow worse than Lucas Giolito’s, and there are plenty of other arms in the Phillies bullpen to target for saves. It’s a sad day for Hector Neris fans (if you exist), but it’s time to move on if you somehow haven’t.

Like what you see here? Well, the writing, not the players. Check out more of Van and his “fancy” stats or catch him along with Jeff Zimmerman and Rob Silver on the Launch Angle Podcast.

Top 60 Running Back Rankings and Tiers for 2018