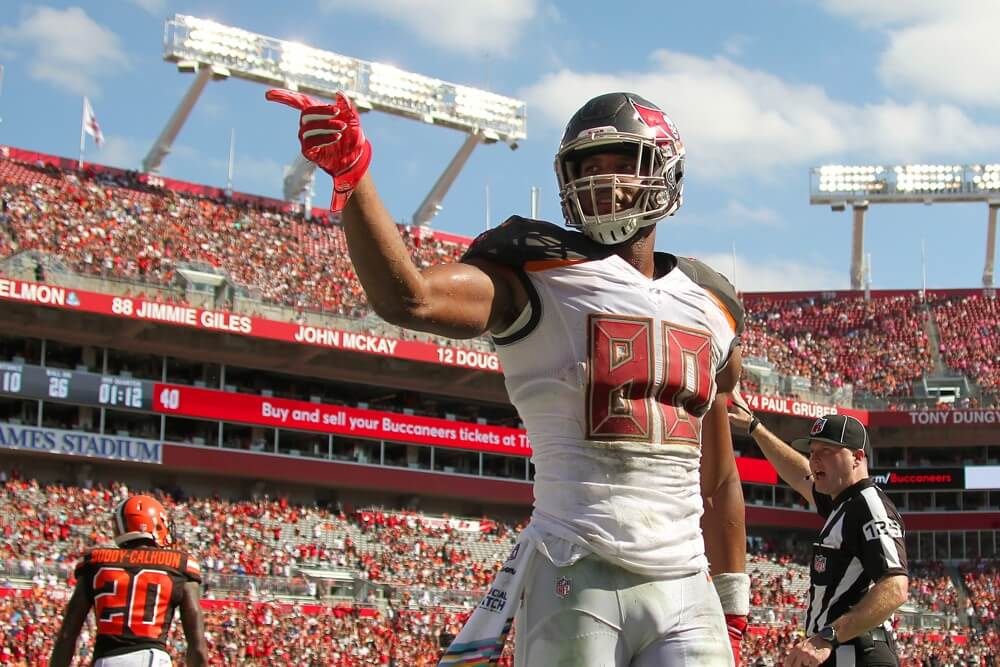 There is a changing of the guard at the tight end position. Rob Gronkowski, the most dominant tight end arguably in fantasy football history, is hanging up his spikes. Jimmy Graham is a shell of his former self. Antonio Gates is nearing AARP eligibility. The former household names at the position are no longer viable fantasy options. Add in that Eric Ebron is unlikely to score 14 touchdowns again this season and you may start to be worried about the tight end position for fantasy purposes. The position is no stranger to being gross, but outside of the big three next year in Travis Kelce, Zach Ertz and George Kittle, you may struggle to find anyone you can trust. Luckily, there is an influx of young talent that will help reshape the position for years.

The Next Generation at Tight End

O.J. Howard is one of my favorite targets at the tight end position for 2019. Why am I so bullish on a player who has never had more than 565 receiving yards in any season? Well, because the elite potential is there. Let’s not forget that Howard was a first-round pick of the Bucs just two years ago. Additionally, he has 11 receiving touchdowns in just 24 NFL games. While he was limited to just 10 games in 2018, Howard still averaged 12.05 PPR fantasy PPG, which is the sixth most among all tight ends. The Bucs lost DeSean Jackson and Adam Humphries in free agency, meaning that 1,590 of their 5,358 receiving yards from 2018, or 29.6 percent of their receiving yards will be up for grabs in 2019. Additionally, nine of their 36 receiving touchdowns, or 25 percent, are also now free. Howard has the elite talent and now the opportunity to thrive. I expect him to be a Top 5 tight end in 2019.

Hunter Henry was a preseason favorite heading into 2018, before tearing his ACL. While he returned in a limited fashion in the playoffs, Henry’s impact was minimal last year. That all changes in 2019, as Henry finally takes over for Gates and like Howard, has the potential to finish as a Top 5 tight end. In 2016, Henry scored eight touchdowns. He followed that up with 579 yards and four touchdowns. However, Gates was still an issue then. Henry had 62 targets compared to just 52 for Gates. With Gates now (likely) out of the picture, and Tyrell Williams in Oakland, I would expect Henry to see around 100 targets, if not more. He will also see a ton of targets inside the red zone, as Gates and Williams departures leave 14 of the 66 red zone targets, which equates to 21 percent. Keenan Allen had a 21 percent target-share of Chargers red zone targets, while Mike Williams had a 19.6 percent target share. Henry should slide in there as the clear cut third option.

Evan Engram is the big winner of the Giants trading Odell Beckham Jr. Engram has averaged 5.6 targets per game when Odell plays, but that balloons to 7.8 when he sits. Additionally, his receiving yards per game jump from 37.5 with Odell, to 59 without him. Lastly, he averages 8.94 PPR fantasy PPG when Beckham is active, compared to 13.44 PPR PPG when Odell is not on the field. Well, it is great for Engram that Beckham will never again be on the field in a Giants uniform. Now a member of the Browns, Beckham leaves a huge void in the Giants passing game. Beckham recorded 1,052 receiving yards last year, which equates to 23.9 percent of the Giants receiving yards. While Sterling Shepard and Golden Tate will likely receive hype as well, both are slot receivers who will take away from one another. Engram, if he stays healthy, can lead the Giants in both receiving yards and touchdowns (outside of Saquon Barkley). I know he disappointed in 2018, but Engram will help rejuvenate the position in 2019.

Chris Herndon and David Njoku are two other young tight ends that will help rejuvenate the position. Njoku averaged 8.99 PPR fantasy PPG in 2018, which ranked 16th among all tight ends. However, he flashed his upside scoring over 10 PPR points in six of his 15 games. He may struggle with consistency, with Beckham and Jarvis Landry drawing the bulk of targets, but he will be the third option in Baker Mayfield’s high volume passing game. Herndon, like Njoku, struggled to find consistency in 2018. However, he had 380 yards and four touchdowns from Sam Darnold in 2018. The only player to have more of either from Darnold was Robby Anderson. Herndon and Darnold have a connection and he should be utilized this season. The only issue I see is week-to-week consistency.

There are likely to be two tight ends selected in the first round of the NFL draft, both from Iowa. Noah Fant and T.J. Hockenson will add more young talent to a position that desperately needs it. Fant was a big winner at the combine, as he ran a 4.50 40-yard dash and had a 39.5 vertical jump. He also had 20 bench reps. Hockenson had 17 bench reps, while running a 4.70 40 and having a 37.5 vertical jump. The athleticism is why I lean Fant, but Hockenson is a known commodity as well. Their fantasy values will depend on who selects them in the first round, but both, especially Fant, will be hyped up this summer. Another draft prospect to keep an eye on is Irv Smith Jr., who is a big-bodied tight end out of Alabama. Smith will likely go in the second round of the NFL Draft, but would be discussed as a first rounder if it wasn’t for the Iowa boys.

If this is giving you the itch I would recommend jumping in a best ball draft on Fantrax! If you have any questions feel free to follow me on Twitter, @MichaelFFlorio.