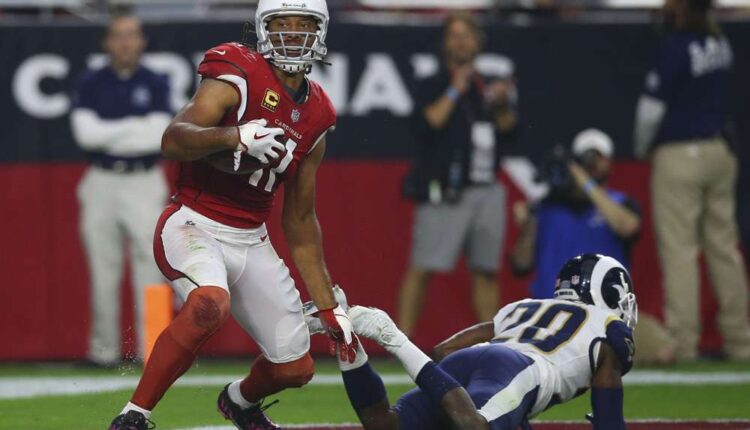 Gary Davenport runs down some of his favorite WR value picks for the coming season of fantasy football.

Hello. My name is Gary, and I’m a backaholic.

In a day and age where more and more fantasy drafters are hitting the wide receiver position early and “Zero-RB” has become a viable draft strategy, I’m admittedly something of a throwback. More often than not, my first pick will be a running back. It’s not at all unusual for me to start a draft by going RB/RB. If the league has a flex spot, RB/RB/RB isn’t out of the question.

This isn’t to say that hitting running back early is a better (or worse) draft strategy. The reality is that after doing this for as many years as I have, I’ve come to realize that there is no end-all, be-all best way to draft a team. There are plenty of ways to build a solid and competitive team—you just need to find the way that works best for you.

Given my penchant for drafting running backs early, I spend a lot of drafts looking for WR value picks in the middle and late rounds of drafts. And in doing so so many times, I’ve happened upon a discovery of sorts.

Whereas rookies are regularly overvalued in redraft fantasy leagues, it’s often the opposite with aging veterans. Fantasy owners can’t wait to cast guys onto the scrap heap in favor of the shiny new toy.

That presents an opportunity for fantasy owners willing to swim against the current a bit.

Now, the wide receivers listed in this piece aren’t going to single-handedly win you a league or finish inside the top-5 in fantasy points. If I could regularly predict guys available later in drafts that did that, I’d have a lot more cabbage in my garden—if you get my drift.

But each of these veteran wideouts has an early ADP outside WR3 territory in 12-team fantasy leagues at Fantasy Football Calculator.

And each has an excellent chance of significantly outperforming that meager asking price.

As C.D. Carter wrote for Sports Illustrated, while there’s more than a little uncertainty surrounding Tate’s role in New York and the Giants offense as a whole, his currently modest ADP makes him one of my favorite WR value picks of 2019.

“So long as his redraft ADP remains depressed, I’m bullish on taking him as my fourth or fifth receiver and waiting to see if he commands a healthy chunk of what could (should) be a pass-heavy approach,” he said. “If he doesn’t—or if the Giants passing offense becomes a horror show—it’ll hardly be devastating for a well-constructed fantasy football team. It’s not likely you’re going to find another receiver drafted in the eighth or ninth round who could end up with as much opportunity as Tate should enjoy. And in fantasy football, opportunity is indeed king.”

Tate’s numbers were down in a 2018 season split between Detroit and Philadelphia, but as recently as 2017 the 30-year-old was targeted 120 times, caught over 90 passes, topped 1,000 yards and was a top-12 PPR fantasy option. Asking for another WR1 season in 2019 might be pushing it, but Tate out-pointed his present ADP by almost 10 spots in last year’s “down” season.

The Giants are going to be playing from behind—a lot. And last I checked, garbage-time fantasy points count the same as all the others.

To be honest, Fitzgerald’s been an annual presence among WR value picks for several years now. But where Fitzgerald made a habit of serving doubters crow in recent years, coming off a disastrous 15th NFL season that saw him record a career-low 734 yards, Jason Katz of Fantasy Pros believes the end may finally be here for Fitz.

“While the Cardinals boasted the league’s most anemic offense in 2018, there’s no positive way to spin Fitzgerald’s career-worst average of seven targets a game, which resulted in a career-worst 734 receiving yards,” he wrote. “Fitz averaged over 10 fewer yards per game than his previous career low. It is exceedingly rare for a wide receiver to be productive into his mid-30s. Mike Tagliere did a great analysis of the age of decline for wide receivers. The short answer is that WRs almost never even play beyond age 35, let alone produce useful fantasy seasons.”

Maybe he’s right. But we’re not talking about just any wideout here. We’re talking about Larry Freaking Fitzgerald, a mortal lock first-ballot Hall of Famer and one of the best to ever play the position. Over a three-year span from 2015 to 2017, Fitzgerald had at least 145 targets, 100 catches, 1,000 yards, and six touchdowns. He also finished as a top-10 fantasy wideout all three years.

Yes, the Cardinals added young talent at the position in this year’s draft and already had Christian Kirk on the roster. But new quarterback Kyler Murray is going to need a safety blanket. A chain-mover. A guy he can count on.

For the cost of a ninth-round pick, I’m willing to gamble Fitzgerald has one more year of being that guy in him.

Hard though it is to believe, it’s been half a dozen seasons since Jackson wore Kelly green in an NFL game. But as Jeff Kerr wrote for 247 Sports, Jackson’s wasted no time making an impression on his new (old) teammates.

“We haven’t had a player like him since he left six years ago,” tight end Zach Ertz said. “I couldn’t tell you how excited I am to have him back. I couldn’t tell you how much he’s changed too in the past six years, just his approach to the game. He’s such a good player. He can do anything he wants at the receiver position. There’s no route he can’t run, no play you don’t want to get him involved in. Defenses just have to know where he is every play or it’s going to be a 70-yard touchdown. He just makes everyone else’s job so much easier. I couldn’t be more thrilled to have him back.”

“So far, he’s been a great teammate,” Wentz said. “Just comes in and works hard. People might say he’s getting up there in age, but he can still go. I’m excited to just keep building that chemistry with him, both on the field and off the field. He’s a great teammate, and I think we’re going to do something special with him.”

At first glance, Jackson’s 41/774/4 stat line and WR43 fantasy finish last year aren’t all that impressive. But the 32-year-old doesn’t appear to have lost his trademark speed—Jackson paced the NFL with 18.9 yards a catch last year, and all four of his touchdowns came from over 30 yards out.

Jackson’s likely to be a bit on the high-variance side (just as he’s always been), but I also expect him to emerge as the WR2 in Philly behind Alshon Jeffery and in front of Nelson Agholor.

Can You Cut Jesus Aguilar, Chris Archer and Other Struggling Stars?

10 Unexpected Fantasy WR Scenarios That Could Become Reality in 2019