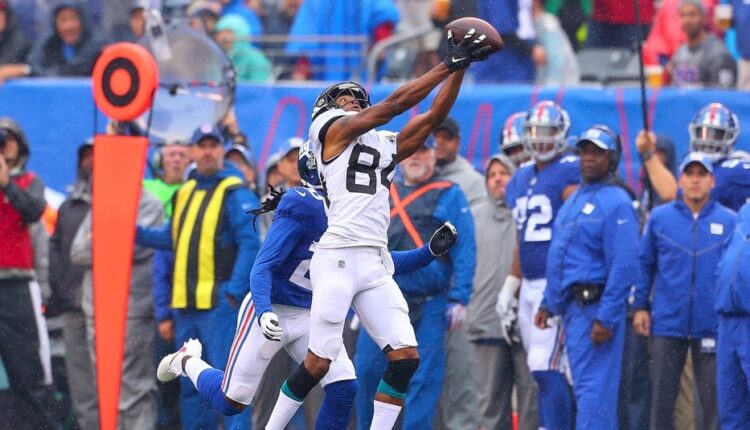 For all you fellow “backaholics,” Gary Davenport digs deep to identify the WR sleepers you’ll need to hit on to succeed in 2019 fantasy football.

I am going to start this piece off with a confession, albeit one that will hardly surprise anyone who has played in a league with me or read much of my work over the years. I am an unabashed old-school backaholic. In the overwhelming majority of fantasy drafts I participate in, my first pick is a running back. Not all, mind you—but most. It’s not that unusual for my first two selections to both be backs. And if there’s a “flex” spot in the league, I’ve been known to kick things off with three straight at the position.

If my backfield’s a mess, it will make me one from summer into fall and then into winter.

Of course, a strong cadre of running backs comes at a price—I regularly find myself in a hole at wide receiver. More specifically, my WR3 spot—by the time I get around to taking a third wide receiver, the options available are…yeah.

That means I have to try to find value at the position late— WR sleepers available outside the first 10 rounds and top 50 players at wideout who have a real shot to emerge as viable weekly starters.

It’s a strategy I go back to regularly for several reasons—including pure mule-headed stubbornness. But I also do it because it works. In more seasons than not, the wide receiver position is the deepest in fantasy football. Your odds of finding value late on draft day is much better at wide receiver than running back.

The 2019 season is no different. There are several wide receivers available going outside the top 50 according to ADP info here at Fantrax who have a real chance to blow away that modest asking price.

The secret’s starting to get out with Williams, whose ADP has been on a steady ascent over the past few weeks. Williams’ arrival in Oakland was overshadowed by the trade that brought Antonio Brown to the Bay Area, but fantasy pundits like Heath Cummings of CBS Sports are warming to the idea of Williams as an undervalued fantasy asset in 2019.

“With the addition of Antonio Brown,” Cummings said, “it makes sense that people are sleeping on Tyrell Williams. It’s also a mistake. The Raiders have 361 targets to replace from last year’s team, and the lion’s share of those should go to Brown and Williams. We’ve only seen Williams receive more than 100 targets once in his career, in 2016 when he caught 69 passes for 1,059 yards and seven touchdowns.”

“I’ve projected Williams for 108 targets this season (120 is well within range) at 8.9 yards per target, and it might be conservative,” Cummings continued. “That’s the same average he posted in 2016 but nearly a full yard below his career average. It also puts him in line for 961 yards. He’s scored once every 15 targets in his career, which would set an expectation of seven touchdowns this year. If you want to drop that one due to Derek Carr, you’re still looking at a high-end No. 3 receiver with upside.”

He’s not wrong—even a little.

After four up-and-down seasons in the nation’s capital, Crowder was a lesser part of New York’s offseason spending spree. At the back end of WR5 territory in fantasy drafts the 26-year-old doesn’t exactly scream “sizzle pick,” but as Bobby Sylvester wrote for Fantasy Pros, that doesn’t mean there isn’t value to be had.

“There is nothing sexy about drafting Crowder,” Sylvester said. “He doesn’t have the upside of even a WR2, nor is the Jets’ offense intriguing at all. If you want a reliable flex player late in drafts, however, you’ll want to snag Crowder, who is a perfect fit with Sam Darnold. Quincy Enunwa, then Chris Herndon excelled as middle of the field pass catchers last year which is Crowder’s forte. In fact, Crowder’s arrival will push Enunwa outside and into fantasy irrelevance. Just like we saw in 2016 and 2017 with Washington (before Crowder’s injury) you can expect a solid 5 catches per game with around 800 yards and a handful of touchdowns from Crowder.”

Crowder’s 29 receptions for 388 yards last year were both career-lows, although in fairness he missed almost half the season and averaged a career-high 13.4 yards per catch. Crowder’s also not that far removed from consecutive WR3 fantasy finishes in both 2016 and 2017 in Washington. Sam Darnold has already shown an affinity for intermediate throws over the middle—and that’s where Crowder makes his hay.

After eight seasons in Green Bay (including a 1,200-yard season in 2014), Cobb joined the Cowboys in free agency after the Packers made no real effort to re-sign him. But as ESPN’s Todd Archer reported, Cobb’s already made quite the impression on his new team.

“Injuries limited Cobb to only nine games and 38 catches for Green Bay in 2018,” he said, “and it was hard to know what the Cowboys were getting in the veteran receiver. If the offseason work is any indication, they have found a replacement for Cole Beasley. Cobb’s versatility can expand the offense for others, such as Amari Cooper and Michael Gallup. Cobb looked quick in and out of his breaks and fast enough to make plays down the field. Will he put up the 1,287 yards he had in 2014? No, but he gives Dak Prescott a security blanket in the slot who can turn a small gain into a big one.”

With Cole Beasley moving on in the offseason, there’s upward of a 90-target hole in the Cowboys passing game for Cobb to slide into in the slot. Dallas is hopeful that Michael Gallup will take a step forward in 2019 too, but if Cobb can recapture some of his Titletown magic he could be one of 2019’s top WR sleepers.

Over the first month of the 2018 season, Cole caught 17 passes for 225 yards and a touchdown—production that landed him inside WR3 territory in 12-team fantasy leagues. Then he developed a case of the dropsies, lost a couple of fumbles and wound up a complete non-factor by November. However. Jaguars WR coach Keenan McCardell told ESPN’s Michael DiRocco that he believes Cole will benefit in 2019 from the return of Marqise Lee.

“The big thing for me for Keelan was Marqise [Lee] got hurt,” McCardell said. “He had to step full-fledge into a starting role and that can weigh a lot on a second-year guy that hasn’t really had that experience of being a starter. It comes with the territory, those ups and downs. Now that he’s had that down, now let’s come back up and let’s prove to people that you belong here, you know you belong here. Now let’s show everybody that you belong here.”

Were I more confident in Lee’s health it might be him listed among my WR sleepers. But as things stand today, Cole appears to have the inside track to leading Jacksonville receivers in targets. The Jaguars may well be a run-heavy team in 2019, but with Nick Foles now in town, the team’s leading receiver should still have fantasy value that far outweighs this non-existent ADP.

Did you enjoy Gary’s rundown of his favorite WR Sleepers? If so you need to head on over to the 2019 Fantrax Fantasy Football Draft Kit for more great strategy, analysis, and rankings.