Why you should keep your faith in Jaren Jackson Jr. 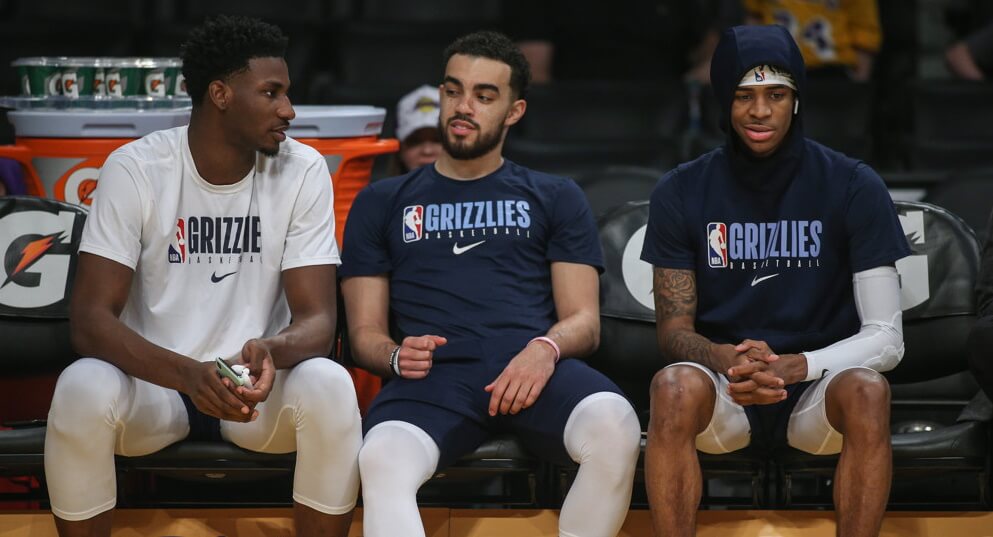 It’s been a tumultuous 2020-2021 campaign for the Memphis Grizzlies. They’ve endured a COVID-19 shutdown and a three-week absence from Ja Morant after the second-year point guard suffered a grade 2 ankle sprain in December. Yet, despite playing the fewest games of any team in the Western Conference (16), they’re right in the thick of things, sitting in 6th place at 9-7, and are prepping for the return of their 6-foot-11 big man, Jaren Jackson Jr.

If you’re like me and stashed away Jackson in your fantasy draft months ago, there’s still reason to remain hopeful. If the torn meniscus scared you away, there’s still time to get him on your roster.

The Return of Jaren Jackson Jr.

Guess who’s back? Well, sorta back

When a torn meniscus in his left knee ended Jackson’s run in the NBA Bubble, the second-year forward was playing the best basketball of his career. In nearly 36 minutes a night, the former Michigan State Spartan averaged 25.3 points — including a 33-point affair — on 48% shooting, including a 10-for-28 mark from 3-point range. Though it’s a limited sample size, that’s a better point per game mark than LeBron James, Paul George, and James Harden in 2020-2021 — all of whom rank in the top-20 among Fantrax fantasy players.

The Grizzlies have kept any updates regarding Jackson’s health very close to the chest. Jackson said last month that his return will “sneak up on you” and more recently, a source within the organization, as reported by Evan Barnes of the Memphis Commercial Appeal, claimed Jackson will begin to ramp up his basketball activities over the next month, keeping him more or less on track to return in the usual 6-month timeframe.

Head coach Taylor Jenkins said the team has been patient with the big man’s return in an effort to preserve his long-term health, so do not expect him back on the court before March’s All-Star festivities.

Jackson, the fourth-overall selection in 2018, burst onto the scene in 2018 and earned a spot on the All-Rookie Team by season’s end. His usage largely stayed the same (26 minutes to 28), it was on offense where he grew the most as he further developed his 3-point shooting. He more than tripled his attempts from beyond the arc (2.4 to 6.5) and doubled his makes (0.9 to 2.5). Jackson’s 39.4% clip was up five percentage points from his rookie season, he made up more than a third (36.3%) of the Grizzlies’ long-range attack and more than a quarter (25.9%) of all points scored. His return will be a sight for sore eyes as Memphis ranks 21st in the NBA in points per game and 3-point percentage.

Memphis has been surprisingly good on defense in Jackson’s absence. The Grizz rank fourth in the league in defensive rating and their 5.5 blocks rank 9th. Jackson’s return will certify Memphis as the league’s “Block Party” as he was responsible for nearly half of all blocks a season ago.

You may be thinking right now, ‘That’s great for Memphis, but how does that transition to my fantasy roster?’. That’s more than a valid question, and even with the rest of Jackson’s stat line largely remaining the same since his rookie year, he averaged a tick more than 30 fantasy points last season, an increase of four points per game.

I’m convinced, but he’s not on my roster

Unfortunately, Jackson is not likely to be found floating on the waiver wire (owned in 92% of Fantrax leagues), so if I’ve changed your opinion on JJJ, then you’re going to have to make a trade. Depending on what format you play, and depending on his current team’s manager, there are a number of ways to land the exciting big man.

If you play in a dynasty league, Jackson is likely a building block for his current team’s future and will require future draft picks as part of the compensation. A package of a couple of future picks may be enough to do the trick. Or, if more immediate talent is needed, pairing a second-round selection with a player like LaMarcus Aldridge should land JJJ on your roster.

I could see a Lonzo Ball-type being the centerpiece of a one-for-one deal. If you play in a head-to-head redraft league, have a surplus of guards, and are looking for a few extra blocks, then this may make the most sense.

Are you buying into Jaren Jackson Jr.? For more players that might be able to help out your Fantasy Basketball squads, check out this week’s fantasy basketball waiver wire.