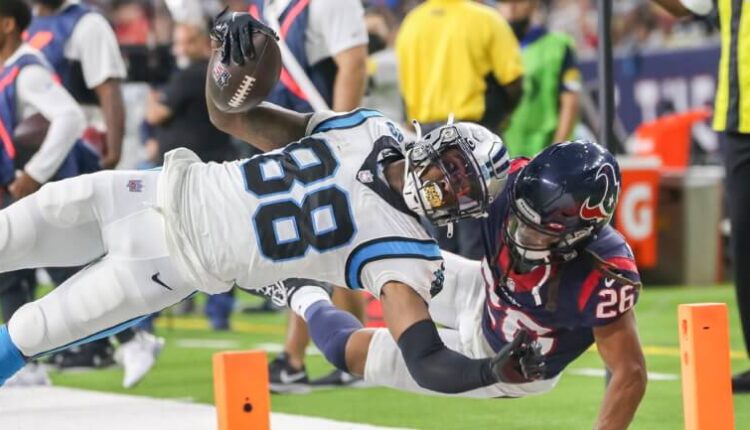 When identifying potential sleepers, snap count and target share is the name of the game. The difference between a player being a sleeper or just some bench piece is a very fine line. It is all about how productive a player can be with the limited looks that they receive. It is also important to consider their matchup and their team’s offensive scheme. The conclusion of Week 8 has left us with some more useful data points. Based on that, here are four Week 9 Sleepers who could give your fantasy football squads a boost.

Trading the sunny days of Jacksonville for the smog-ridden skies of East Rutherford, New Jersey, James Robinson had a forgettable debut. He played in only 22% of snaps totaling 17 rushing yards on five carries while failing to bring in his only target. Michael Carter ended up “leading” the backfield with a 7-26-0 line. Carter played 56% of snaps compared to his usual 42-29% when Breece Hall was healthy. The fact that his snap count didn’t shoot up even higher is a positive sign for James Robinson. Robinson was a fresh face on the team last week. There’s no way he had enough time to gain a good enough understanding of the playbook to play a meaningful role in the game.

It doesn’t matter how talented you are if you don’t know the plays, look at Christian McCaffrey. When traded to the 49ers he put in a mediocre week his first time out with his new squad. Fast forward one week later and he throws a touchdown, runs for a touchdown, and catches a touchdown. I am not predicting that James Robinson will have such a game against the Bills, but I do believe that he will be much more involved. The Jets have a talented offensive line. A full week of practice running behind those big boys ought to do wonders for Robinson. His talent alone makes him one of my top Week 9 sleepers, even in a tough matchup.

Before last week’s game, PJ Walker made it known that Terrace Marshall had a very good week of practice and he wanted to get him the ball. That’s very nice of his new quarterback to want to reward a young player’s hard work. It’s even nicer when those words transpire into something tangible. On Sunday Terrace got his touches. He caught 4 of 9 targets for 87 yards. He nearly scored on a 20+ yard shot to the end zone. Although the Panthers lost the game due to a combination of DJ Moore’s tomfoolery and Eddie Pinero’s weak mental game, this offense seems to be getting on the right track. This put Marshall on the map to be one of my Week 9 sleepers.

In the last two weeks that PJ Walker has been under center, Marshall has played in 86% and 93% of snaps. This increase is largely due to the departure of Robby Anderson via trade to the Arizona Cardinals. It is likely that the QB and WR connection is there between PJ and Terrace seeing as Walker was the third-string option at the start of training camp and Marshall was the WR4-5. The Panther’s Week 9 opponent Cincinnati Bengals’ defense is no slouch this season. While it’s a tough matchup on paper, I believe that Marshall will stack up just fine if he avoids Chidobe Awuzie and instead gets cornerback Eli Apple in coverage.

Stop me if you’ve heard this before. The Green Bay Packers are a freaking mess. When you’re losing at the pace that this team is, you’re forced to try new things. You’re forced to go with the hot hand. Because when things are falling apart and you find something that works, people are going to look at you funny if you go away from that. This explains why the Packers continued to run the ball even after they were down two scores to the Buffalo Bills on Sunday night. The run game has been the only thing that has been working on offense for the Packers, so they can’t abandon it. That doesn’t mean that they should or will quit on their passing game.

Aaron made comment this past week suggesting that there were receivers or a single receiver that he would like to see get less playing time. Take his comments how you will, but for what it’s worth he had a point. If you are on the field you need to be producing. A struggling team cannot afford pre-snap penalties, dropped passes or any other miscues. The competition to find a reliable option behind Allen Lazard is ramping up. However, that competition got a little lighter after Christian Watson went down with a concussion last week. Making his first career catch in Week 7, Toure’s encore in Week 8 saw him catch his first touchdown pass. The Packers get a pitiful Detroit Lions team next week. Toure has a chance to lead all Week 9 sleepers if he can capitalize on the juicy matchup.

I’m regretting typing this already. I mean I’ve featured Hunter Renfrow in not one, but two of my trending-down articles. As a matter of fact, he was just in last week’s edition. The philosophy of this offense has all of a sudden changed to a run-first team after acquiring the league’s No. 1 pass catcher. Make that make sense. Whatever the case may be, there are two reasons that I am willing to give Hunter Renfrow one last chance this week. And I do mean one last chance. Those reasons are snap count and matchup.

Okay, okay, now we’re talking. Hunter Renfrow’s snap count is on the rise. In the previous two weeks, Renfrow was only on the field for 55% and 57% of snaps. In this past week, that number increased to 79%. The Raiders had been running a ton of two-wide-receiver sets, a formation that Renfrow is not featured in. The number would seem to indicate that the team either ran more 3WR sets or Renfrow has taken over Mack Hollins’ spot in the 2WR formation. Mack Hollins’ 91% snap count last week lets us know that it’s the play calling that has changed and not Renfrow’s status over Hollins. If this trend continues this week in Jacksonville, I believe that Renfrow could finally come alive and have a big week. He tentatively rounds off my Week 9 sleepers. Play him with extreme caution, only in the most desperate of situations.

Also be on the lookout for our Week 9 Rankings which are released on Wednesday mornings: QB | RB | WR | TE | Flex Rankings