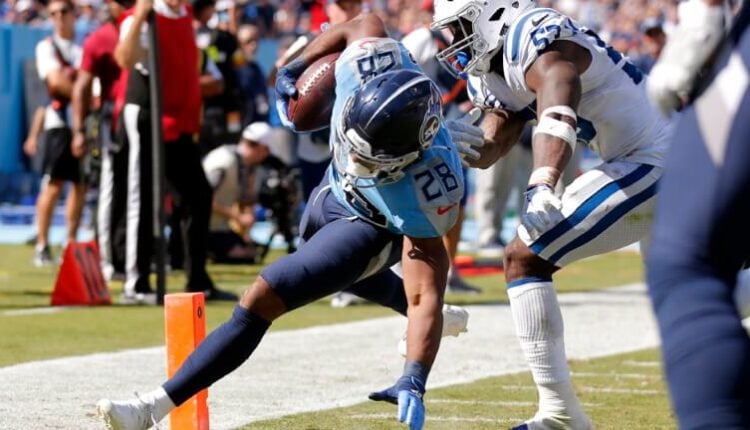 It has been a wild week in the NFL, to say the least. The NFL trade deadline came and went on Tuesday with little fanfare. The resulting moves had a miniscule fantasy impact compared to some of the other news stories of the week. There was a ton of news off the field, and some on the gridiron as well. Plenty of fantasy ramifications came about from both sets of stories, so there is a lot to cover. Four teams are on bye this week, but there are plenty of big names that fantasy managers will have to replace this week. Three of the top-20 running backs and five of the top-20 wide receivers in total fantasy points are out of action this week. So let’s get to the news and notes along with my Top-250 Week 9 Flex rankings.

The biggest piece of news from last week’s action was the loss of overall RB1 Derrick Henry. The Titans star is likely out for the rest of the regular season following foot surgery. Henry was practically lapping the field in terms of fantasy production. He has more than twice as many fantasy points as Melvin Gordon, who is currently the overall RB16 in half-PPR scoring. There is simply no replacing the King, but we have no choice but to plug and play the best we can. Tennessee signed Adrian Peterson and D’Onta Foreman this week, and Peterson will likely get a fair share of early-down work going forward. Speaking of nearly lapping the field, Peterson’s 3,192 career carries are nearly 1,500 more than the next-highest active running back (Mark Ingram, 1,693). There is some serious tread on those tires.

For fantasy purposes, I am more intrigued in the near term by Jeremy McNichols. The fifth-year back out of Boise State has bounced around a bit, as the Titans are his fourth NFL team. But McNichols has been a solid receiver out of the backfield this season. He has caught 21-of-27 targets and averaged nearly 10 yards per reception. McNichols has not had a carry since Week 5, but that is sure to change this week. Tennessee’s opponent, the Los Angeles Rams, has allowed the eighth-most receptions and receiving yards to opposing running backs. Combine that with the long layoff that Peterson will have to come back from, and McNichols is my preferred option in this matchup. I consider McNichols a low-end RB2, while Peterson is an RB4. If you must use Peterson as a Week 9 Flex, try to temper expectations out of the gate.

For the moment, I ranked the two Titans running backs just ahead of the two Carolina Panthers running backs. However, I would like to offer the following caveat. Christian McCaffrey returned to practice this week, so I felt it was worth it to include him. But to be honest, I am not expecting him to play on Sunday. The New England Patriots allow a healthy 159.1 all-purpose yards to opposing running backs. Chuba Hubbard would be a decent bet to approach 100 total yards if McCaffrey misses another game. He has averaged 21.4 opportunities in his five starts. If CMC is indeed out, Hubbard would get bumped up to somewhere in the mid-RB2 range. I will update these rankings on Sunday morning, but you can always comment below or on Twitter with any pressing questions you have between now and then.

James Robinson is currently my RB23, but that will likely change for better or worse on Sunday. Robinson left last week’s game with a heel injury. It was a tough break for fantasy managers in what was an excellent matchup. Carlos Hyde stepped in and parlayed 17 opportunities into 72 scoreless yards. Robinson missed Wednesday’s practice, but his injury does not appear to be severe. Hyde also showed up on the injury report with a calf injury, though he did participate in practice. The matchup for either back is not ideal against the Buffalo Bills, who have allowed the fewest fantasy points per game to opposing running backs. If Robinson plays on Sunday, he will be a volume-driven RB2. I would be hard-pressed to recommend Hyde even if the Jaguars sit Robinson, though your other options may dictate your course of action.

Two weeks ago, we all considered Calvin Ridley, Henry Ruggs, and Odell Beckham Jr. solid fantasy plays. Now Ruggs’ NFL career is likely over, and we have no idea when we will see Ridley or OBJ on the football field. Some issues are much more important than football, whether it be real life or fantasy. Still, it is crazy to think that a fantasy manager could have very easily drafted all three wideouts. I suppose you can add Michael Thomas to that list, though the Saints wideout does have a physical ailment he is also dealing with. My utmost respect goes to players like Ridley and Thomas who have publicly admitted their recent struggles with their mental well-being. As much as we often try to pretend otherwise, these are human beings dealing with real issues that extend far beyond the white lines.

The sad reality is that all of the scenarios mentioned in the previous paragraph do carry fantasy implications, both for the players themselves and several of their teammates. So at the risk of sounding cold, here are a couple of quick notes.

Russell Gage went from a 4-67-1 line in Week 7 to not even being targeted last week. He could be a desperation PPR play under the right conditions, but he is outside my top-45 regardless of format. I was already high on Hunter Renfrow for Week 9 even before the Ruggs news. He could easily settle in as a WR2 for me by the time Sunday rolls around. Coming into the week, Ruggs was the overall WR33 in half-PPR scoring, with Bryan Edwards at WR58 and Zay Jones at WR107. Remove Ruggs from the picture and Edwards becomes a viable Flex play. Jones is still only a deep league option. Jarvis Landry is still the only receive in Cleveland I trust for the time being. I would not start Donovan Peoples-Jones or Rashard Higgins this week, though I don’t mind grabbing them where available.

In more traditional news, Jerry Jeudy returned last week after being sidelined for six weeks with an ankle injury. Jeudy operated mostly out of the slot and caught all four of his targets. I would expect his role to expand a bit now that he has a full game under his belt. He is a WR3 for me in a Week 9 matchup against the Dallas Cowboys. On the other side of the ball, Dallas is hoping to get Michael Gallup back this week. He has also been sidelined since Week 1. I always try to avoid starting players in their first game back from an extended absence. Although right cornerback Ronald Darby has been susceptible to the big play, I would not count on Gallup to be the one to take advantage of that. I would prefer to keep him on the bench and see how he is utilized.

Julio Jones has caught three or fewer passes in four of five games and has missed three more due to injury. Jones is also still recovering from a hamstring injury. He did practice on Wednesday, which is a good sign. The Los Angeles Rams have been a bit more generous to opposing wideouts than their reputation would suggest. Los Angeles is in the bottom half of the league in terms of fantasy points allowed to opposing wide receivers. But they still have excellent cornerbacks including Jalen Ramsey and have ceded just five touchdowns to wideouts this year. Only three teams have given up fewer. I currently have Jones just outside the top-100 overall in my Week 9 Flex rankings. This is another scenario where I would rather see him make it through a game unscathed on my bench rather than start him for a potential dud.

Arizona placed wide receiver A.J. Green on the reserve/Covid list following a positive test after a positive test. Insert joke about Green catching something after his failed “attempt” to catch the game-winning touchdown pass last week, as Arizona suffered their first loss of the season. OK, maybe I am a cold person. Seriously, I hope he is fine and that his is a mild case. I would not rush to assume that Rondale Moore would benefit from Green’s expected absence this week. The rookie has eclipsed 30 receiving yards in just one of his last six games. Now, if DeAndre Hopkins, currently dealing with a hamstring injury, were also to miss this week’s contest, that would be a different story. For now, though, Hopkins and Christian Kirk are the only Cardinals wide receivers I would be excited to start this week.

Denver placed starting tight end Noah Fant on the reserve/Covid list, leaving his Week 9 status in doubt. Fant has been wildly inconsistent this season. This is to say that he is similar to most fringe TE1s. He has finished outside the top-25 on three occasions and bottomed out as last week’s TE39 in half-PPR scoring. I would expect Albert Okwuegbunam to get the start for Denver. Dallas has allowed the 11th-most fantasy points per game to opposing tight ends this season. Safety Jayron Kearse has been solid overall, but his coverage has probably been the weakest part of his game. Even if Fant is ruled out, it would be difficult to recommend Okwuegbunam as a potential Flex option unless you are in a deep league or use tight end premium scoring.

The San Francisco 49ers and Buffalo Bills may be getting their starting tight ends back sooner rather than later. George Kittle and Dawson Knox are on the mend from calf and hand injuries, respectively. Kittle appears more likely to play this week than Knox, but we will see how things progress over the next couple of days. I will admit it will be hard for me to stick to my rule about not starting players coming off injury if either Kittle or Knox were to suit up. It should be noted, however, that Kittle would square off against an Arizona defense that permits the fewest fantasy points to the position, and Buffalo is a two-touchdown favorite against the Jacksonville Jaguars. The Bills would probably not ask a whole lot of Knox in a game they will likely lead throughout.