Week 8 Rankings: Handcuffs Can Be Fun! 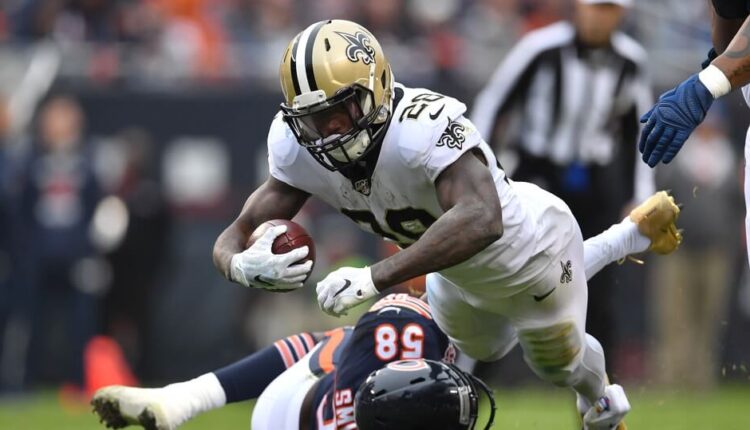 There were some downright strange happenings last week in fantasy football. A couple of backup running backs filling in for first-round studs produced the top two running back performances of the week. The performances were surprising for different reasons. Latavius Murray blew up in Chicago against the vaunted Bears defense, finishing with 150 total yards and two scores. He was bested only by Chase Edmonds, who had 150 yards and three touchdowns filling in for David Johnson. Coach Kliff Kingsbury pulled Johnson after just one carry, citing his back injury. Edmonds filled in and went off. New Orleans and Arizona square off in Week 8 and, as of right now, it appears Edmonds and Murray are the favorites to get the majority of carries. I have both in the RB2 range in my Week 8 rankings.

For help getting ready for NFL Week 7, check out our Week 8 Waiver Wire Recommendations and  FAAB Guide.

If I told you that a Detroit Lions wide receiver had four touchdown catches and another surpassed 100 yards, what are the odds that neither would be Kenny Golladay? Marvin Jones scored the quartet of touchdowns while Danny Amendola led the team with 105 yards. Meanwhile, Golladay had just one catch on two targets for 21 yards. This was not a case where an individual matchup was to blame, as all four of Jones’ touchdowns came against different defenders. Fantasy football can be a mysterious fig. The Lions have an exploitable Week 8 matchup when they face the Giants and their vulnerable secondary. I would fire up Golladay as a WR1 again this week, as the tide should turn in his favor. Jones is in the volatile WR3 mix, while Amendola is an untrustworthy PPR dart throw.

In other Lions news, the team placed running back Kerryon Johnson on IR with a knee injury. The second-year back was having a solid season but had not had the true breakout many were expecting. Still, it is a massive blow for fantasy owners who were relying on him as their RB2. He is eligible to return late in the season, but for fantasy purposes, his season is effectively over and he can be safely dropped. Ty Johnson is the next man up and will be this week’s most popular waiver wire add. Despite the immediate boost in value, I would caution against expecting too much. Kerryon Johnson had only surpassed 50 rushing yards in one of six games and was just outside of RB2 territory in PPR leagues on the year. Ty Johnson will likely be an RB3 in Week 8 and moving forward.

A couple of veteran wide receivers found new homes as the NFL trade deadline approaches. Mohamed Sanu was traded to New England and Emmanuel Sanders is now a San Francisco 49er. I would not expect the value of either player to change much on their new teams. Sanders owners may squeeze a 17-game season out of the veteran, which is a nice little boost. Josh Gordon figures to be the player most adversely affected. Perhaps the move is a sign that his knee injury is worse than expected. The biggest winners are owners of the sophomore receivers left behind in Atlanta and Denver. Calvin Ridley and Courtland Sutton were already producing at a high level this season and should get an even bigger workload moving forward. Both are WR2 in my Week 8 rankings, and I would them to be staples in that range in most weeks.

Got a beef with Mick’s Week 8 Rankings? Let him hear it in the comments below!