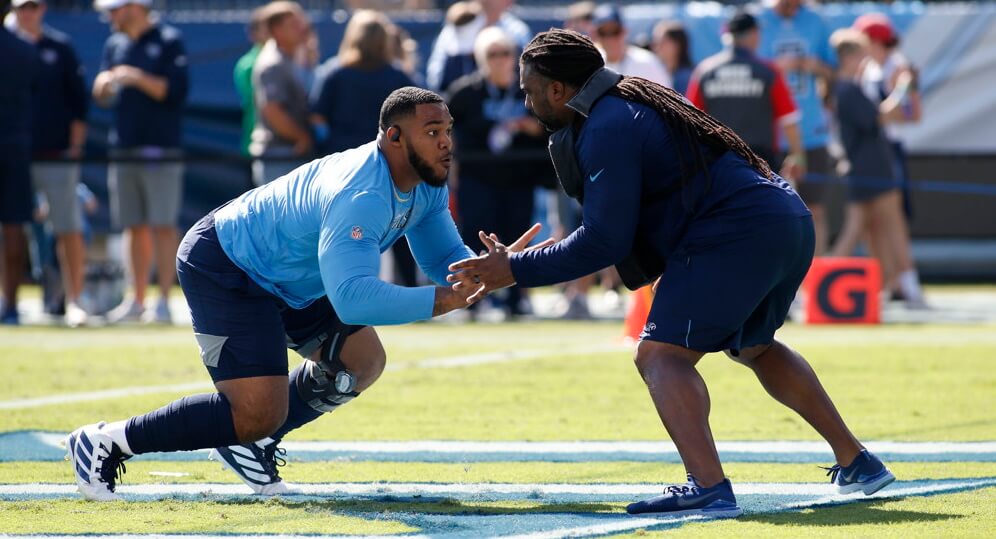 Bye weeks and injuries are making for rough fantasy waters? Gary Davenport is here to help keep the ship afloat with his favorite IDP sleepers for Week 8 of the fantasy football season.

As the great philosopher John “Hannibal” Smith once said, “I love it when a plan comes together.”

In this very column last week, I recommended a Kansas City Chiefs defensive end as a potential sleeper in Week 7. To say that Okafor paid off is an understatement—the seventh-year veteran was a big part of a defensive onslaught that produced nine sacks against the Denver Broncos, piling up four total tackles, two sacks, and a forced fumble in a 30-6 Chiefs win.

Not only did Okafor produce a decent stat line for the IDP owners who rolled the 28-year-old out there, but he finished as a top-five IDP option on the defensive line.

Now, this doesn’t mean that every player listed in this article will hit as Okafor did. Believe me, I wish they would. But there’s a reason these players qualify for sleeper status by being owned in 20 percent or less of the IDP leagues at Fantrax. Sure bets they ain’t.

But it’s heartening to see that you can pluck a player off the scrap heap who won’t just perform reasonably well. You can roll out a few of these IDP sleepers who can be real difference-makers. They can be the difference between notching a win or suffering a loss.

With injuries continuing to mount and the bye weeks well underway, it’s a good thing to know.

For help getting ready for NFL Week 8, check out our Waiver Wire Recommendations and our FAAB Guide.

Sheard spent the month of September as a spectator after having knee surgery at the beginning of August. However, as Zach Hicks wrote for Stampede Blue, since taking the field for the first time in Week 4, the 30-year-old has been making up for lost time.

“Sheard has been excellent and perhaps the Colts’ most valuable defender these past few games,” Hicks said. “After missing the first three weeks and most of the offseason with a knee injury, he has come on strong 1.5 sacks and two quarterback hits in the past two games. The steady veteran has also provided a huge spark to the Colts’ run defense and helped the team improve in this area.”

Frankly, that Sheard’s owned in such a low percentage of leagues is almost laughable—the ninth-year veteran and former Super Bowl champion has shown the ability to perform as a high-floor DL2 consistently over his career. Add in a matchup with the same Broncos team the Chiefs just embarrassed, and you get about as easy a sleeper call as you’re going to see.

When the Titans made Simmons the 19th pick in the 2019 draft, the general belief was that the ACL tear he suffered while preparing for the draft would wipe out his rookie year. Not only did Simmons surprisingly make his debut last week against the Los Angeles Chargers, but he was a one-man wrecking crew—four solos and a sack in just 21 snaps.

“To do what he was able to do in his first game, coming off an ACL, it’s amazing really,” Haynesworth said, “because he’s still building his strength back and it’s not all the way back yet. The one thing I did see, watching his lateral movement, is he doesn’t have power in his hurt knee so he couldn’t explode like he’s eventually going to be able to. But as soon as he has that and he’s 100 percent, he is going to be even more of a force to be reckoned with and he already is now.”

Simmons’ relatively low snap count is cause for some concern. But his per-snap production against the Chargers and a top-five IDP matchup in Week 8 against the Tampa Bay Buccaneers are awfully tempting nonetheless.

Gerry’s an interesting story—a college safety who the Eagles drafted as a linebacker who has gone from practice squad to special-teamer during Philly’s Super Bowl run to a situational defender to the starter at middle linebacker last week with Nigel Bradham sidelined by an ankle injury. As Walton Spurlin wrote for Fantasy Pros, Gerry has stepped up every step of the way.

“With Nigel Bradham (ankle) unable to play in Week 7 it was Gerry that stepped up,” Spurlin said. “He finished the game with 11 total tackles and now has 19 in the last three games. He has also flashed big-play ability as he has had an interception, and has scored a defensive touchdown. If and when Bradham returns, he should continue to have a role on the defense, as the Eagles released Zach Brown last week.”

In addition to the ankle injury, Bradham’s now battling a bug too—the veteran linebacker didn’t practice on Wednesday. That increases the chances that Gerry will be called on again in Week 8 in Buffalo against a Bills team that ranks 10th in the NFL in rushing.

Morrow wasn’t supposed to play a big role in the Oakland defense in 2019. But after Vontaze Burfict was suspended for the rest of the year, forcing Tahir Whitehead inside, the team needed not only a starter on the weak side but a second nickel linebacker. As Thomas Wheaton wrote for Just Blog Baby, Morrow’s done both with aplomb.

“The third-year linebacker is showing why the staff kept him over the older (Brandon) Marshall,” he said. “Morrow is flying around the field, diagnosing plays, and coming up in big stops for an improved Raiders defense. Having proven his ability in coverage as well as in run defense, it is hard for the Raiders to take Morrow off the field.  With the defense spending a lot of time in nickel coverage, Morrow is spending more and more time on the field.”

Morrow’s statistical production hasn’t been especially impressive—his season-high in tackles for a game is seven. But Morrow’s reached the point where he’s now playing every defensive snap, and that alone is enough to land him on the sleeper radar ahead of this week’s trip to Houston.

Prior to last week’s loss to the San Francisco 49ers, Troy Apke’s NFL career consisted of all of 10 defensive snaps. But when free safety Montae Nicholson went down with an ankle injury, the second-year pro out of Penn State was called on to man the back end. Batterymate Landon Collins told Kyle Stackpole of the team’s website that he was impressed by how Apke answered the bell.

“He came in and did his job, and that’s what’s expected of him,” Collins said of Apke. “Like we all say, when one person gets hurt, it’s next man up, and what he did was fantastic coming in and making the plays that he made. And now we have to be on the same page from here on out until whenever [Nicholson comes back].”

Apke finished the game with six tackles and his first career interception—numbers that slotted the 24-year-old inside DB2 territory in 12-team IDP leagues. With a short turnaround before Thursday’s trip to Minnesota, it’s unlikely Nicholson will play in Week 8. That opens the door for Apke to make his first career start against a Vikings team allowing the seventh-most fantasy points to safeties in 2019.

The Los Angeles Chargers have been ravaged by injuries—again. The strong safety position has been hit especially hard—the team’s lost two Pro Bowlers at the position in Derwin James and Adrian Phillips. That thrust rookie Roderic Teamer into the starting lineup, and as Joshua Fischman reported for the team’s website, the youngster is holding his own.

“The strong safety posted an impressive performance in the Chargers’ Week 7 loss to the Tennessee Titans, in which he recorded his first career interception,” he said. “The pick gave the Bolts possession in the third quarter with the game tied at 10. Teamer tied his career-high with six solo tackles, including his first career tackle for a loss, and he was also credited with a pass defended. Through five career NFL games, the Tulane product has tallied 22 solo and 31 combined tackles, ranking him second among rookie defensive backs in each category.”

Teamer’s Week 7 outing ranked him among the top-10 defensive backs in IDP leagues, and he’s been a top-15 performer since Week 5. Teamer and the Chargers play a Chicago Bears team Sunday that’s inside the top-10 in fantasy points allowed to defensive backs, creating something of a perfect storm of sleeper goodness.