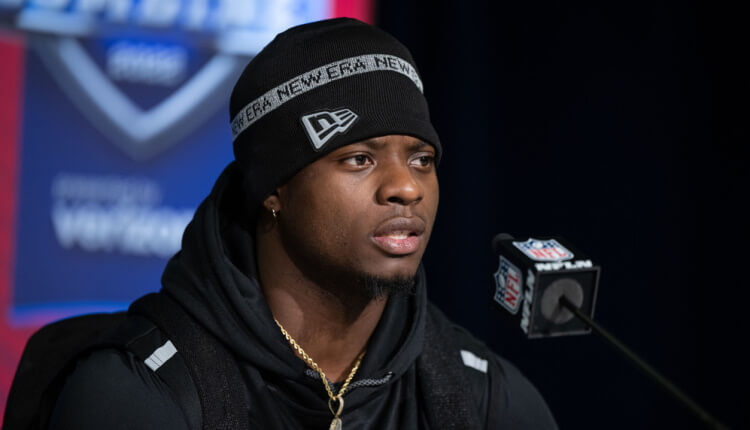 When identifying potential sleepers, snap count and target share is the name of the game. The difference between a player being a sleeper or just some bench piece is a very fine line. It is all about how productive a player can be with the limited looks that they receive. It is also important to consider their matchup and their team’s offensive scheme. The conclusion of Week 6 has left us with some more useful data points. Based on that, here are four Week 7 Sleepers who could pay off big for your fantasy football squads.

Mack Hollins has been a big surprise. It has been him, not Hunter Renfrow that has been the clear number two wide receiver. Playing in at least 87% of snaps in all six games so far, Hollins has been on the field a ton. The production has been scattered, but coming off the bye following a tough loss to the Chiefs, the Raiders have something to prove. I believe that my first Week 7 sleepers pick, Mack Hollins will be a big part of the bounce back.

Last week Hollins went catch-less on four targets. The only thing promising were the numerous deep targets he got in that game. Hollins the deep threat on this team and when he and Carr do connect, it’s usually on a big play. A prime example is Week 3 against Tennessee when Hollins put up a 8-158-1 line. The Raiders take on the Houston Texans this week and the Raiders really should be able to get it going against a team that just allowed Marvin Jones Jr. to rack up 104 receiving yards.

You’d better believe that a breakout game for Brian Robinson is coming sooner rather than later. For the second week in a row that he has be active, Robinson led the Commanders in running back carries. A paltry nine attempts in Week 5 and then 17 carries this past week. Robinson’s snap count also increased drastically from 29% to 47%. Now that the coaching staff is comfortable throwing him out there, I believe that we see him in more of a bell cow role this week. I am projecting over a 55% snap count for Robinson.

Brian Robinson was introduced to “Many Men” after returning from being shot twice in the leg 6 weeks ago pic.twitter.com/G8XiroCrST

The Commanders have completely lost faith in Antonio Gibson. Ball security is one of the most critical aspects of the game, so when you constant put the ball on the ground, your opportunities are bound to be limited. That means that Robinson’s only source of competition is the natural pass catching back, J.D. McKissic. McKissic is not a threat to take much of Robinson’s early down work. The latter has only received two carries in the last two weeks that Brian has been active. Trotting out against a beatable Green Bay run defense, Robinson could find himself atop all of the Week 7 sleepers.

Romeo, Romeo, where art thou Romeo? The Green Bay rookie has only shown up to the party in two of the first six games this season. His breakout game came against the Tampa Bay Buccaneers in Week 3 where he posted an 8-73-1 game, he followed that up with a 5-47-1 performance. The last two games, crickets. He posted a 3-29-0 line in Week 5 and then a 4-21-0 against the Jets. He’s supposed to be one of my Week 7 sleepers, yet here I am focusing on the negative.

Now lets take a look at the positives. The targets. Even while Doubs hasn’t been particularly productive as of late, the targets are still there. He’s gotten at least 8 looks in the passing game in the 3 of the last 4 weeks. Snap count. In the same four-week span, Doubs has been on the field for at least 86% of snaps. His role on the team is solidified. The unfortunate injury to Randall Cobb should also give him a boost in the target department. Expect a blow-up game for Doubs against a Commanders’ secondary that couldn’t cover a rusty pickup if they had a tarp.

Don’t look now, but the Falcons are surpassing all expectations so far this season. Sitting at an even 3-3, they have the same record as the first-place Buccaneers. However, Tampa Bay currently owns the tiebreaker game. A big part of the success that the Falcons have been having is thanks to their run game. The Falcons have been able to use their run game to put get Mariota and the rest of the offense into favorable field position. Where the run game has helped the most is in the time of possession category. The last time out against the San Francisco 49ers, the Falcons out possessed them 33:25 to 26:35.

8 carries, 54 yards and a TD on that drive for @AtlantaFalcons RB Caleb Huntley

Last week Caleb Huntley led that Falcons’ running backs in carries with 16. Rookie Tyler Allgeier was a close second with 15. Huntley was able to outproduce Allgeier 59 yards to 51. If the Falcons stick with the game plan and pound the rock, both running backs should be well fed next week. Playing against a Bengals’ run defense that opposing teams love to try an pick on, Huntley’s bruising style seems to put him in a perfect position to round out my Week 7 sleepers picks.

2023 Fantasy Baseball: Projecting the Second Round