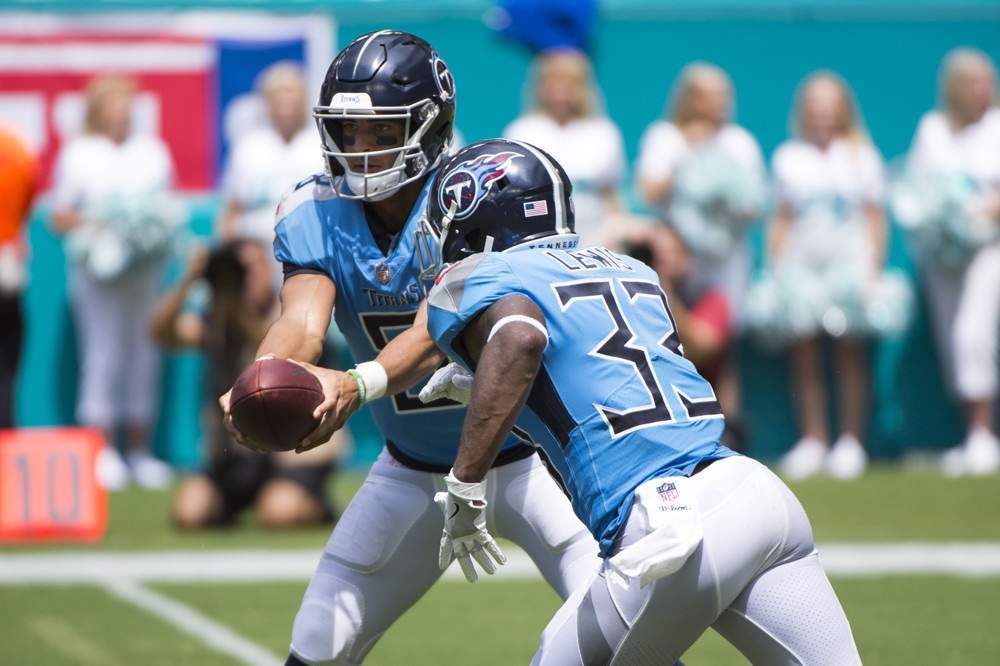 With so many NFL teams employing a running back by committee approach, there are not many running backs who will be affected by Week 7 byes. James Conner and Marshawn Lynch are clearly the best of the bunch. Currently the overall RB4 and RB15 respectively, their owners will have a difficult go of it in Week 7. Chris Carson has been solid of late, though he underachieved last week. Those rostering any of the Green Bay Packers running backs are probably frustrated enough to already at least be looking for other options on a week-to-week basis. Let’s take a look at some running backs who may be flying under the radar this week. Here are my Week 7 running back sleepers.

The Tennessee Titans’ offense was woeful in last week’s beatdown by Baltimore. The Titans were shutout, and Marcus Mariota was incredibly sacked on over 40 percent of his dropbacks. Dion Lewis had a season-low 14 yards from scrimmage in the loss. Owners of Lewis should chalk up last week’s disappointment to a bad day and a bad matchup and move forward. Lewis is in prime position for a big game when Tennessee travels across the pond to face the Los Angeles Chargers in London.

Call me crazy, but I think the best way to keep your quarterback upright is to get the ball out quickly. Quick passes to Lewis underneath and in the screen game are a great way for the Titans to protect Mariota. The Chargers have perennially struggled against pass-catching running backs, and this season is no exception. Los Angeles allows the fourth-most receiving yards to running backs and the third-highest yards per catch.

I also think a sneaky edge goes to Tennessee here because of the start time. Because this game will be played in London, it will actually be played at 6:30 AM PST. I do not think travel is as much a factor as it would have been even a generation ago, but I think the Chargers might get off to a slow start in this game. Dion Lewis has not posted a top-30 fantasy finish since Week 1, but that streak ends in Week 7. In fact, I have him as a solid RB2 this week in standard leagues, and I think he is a potential RB1 in PPR leagues. His recent struggles may give owners pause, but that is exactly what qualifies Dion Lewis as one of my favorite Week 7 running back sleepers.

Lost in the Colts’ fourth consecutive loss was the breakout performance of second-year running back Marlon Mack. Returning from a three-week absence due to a hamstring injury, Mack totaled 89 rushing yards on just 12 attempts in last week’s defeat at the hands of the New York Jets. The yardage was a season-high for a Colts’ running back. Mack became the fourth Colt in the last four weeks to lead the team in rushing. Because no one really stepped up in his absence, this is Mack’s backfield to lose. I believe he will only see more work going forward. Mack does not have the easiest of matchups but should be able to do some damage when Indianapolis hosts Buffalo in Week 7.

Buffalo’s rush defense has stiffened in recent weeks, but this is still a plus matchup for Mack. The Bills have allowed five rushing touchdowns this season, a mark better than just five NFL teams. Indianapolis is also favored in this game, which means game script could be in Mack’s favor. This would especially hold true if Bills’ quarterback Josh Allen were unable to play this week. Marlon Mack may not be the safest running back option out there, but he has the potential to grab a firm hold of this backfield with another good game. I expect him to post a top-20 fantasy finish in this matchup.

Duke Johnson finally had a good fantasy day last week, finishing with 109 total yards from scrimmage and posting a weekly finish as the overall RB17. However, his production was not the result of added volume. Johnson touched the ball just six times in Cleveland’s 38-14 loss to the Los Angeles Chargers. The University of Miami product does not have an ideal amount of weekly touches, but he does have a tempting Week 7 matchup when Cleveland takes on Tampa Bay.

Truth be told, the one area where Tampa has been stout defensively is on the ground. They have held opposing running backs to a shade under 3.5 yards per carry and just 66.6 yards per game. However, they do struggle to handle backs who catch passes out of the backfield. The Buccaneers have permitted the same number of yards to opposing running backs via the air as they have on the ground. Cleveland’s receivers struggled mightily in last week’s defeat. Jarvis Landry and Antonio Callaway remarkably combined for just 20 yards on 19 targets. I think Hue Jackson and Todd Haley will look to establish a rhythm early for Baker Mayfield with high-percentage throws. I believe Johnson will be a big part of that. Duke Johnson certainly has a lower floor than most due to his lack of guaranteed touches but could make for a sneaky start in this game, particularly in PPR leagues.

Consider this me waving the white flag. I railed on Frank Gore prior to last season. And while he was never an elite weekly fantasy play, he did finish the year as a top-20 back. This year, I thought the notion of Gore taking meaningful snaps away from Kenyan Drake was laughable and absurd. The Dolphins are 4-2 and Frank Gore is their leading rusher. Frank Gore will live forever. I admit it. Gore has a nice Week 7 matchup when the Dolphins do battle with the Detroit Lions.

Detroit is coming off a bye, which I do not usually like to target when seeking out matchups to exploit. But I don’t know if one week was enough to fix the holes in their rushing defense. Detroit has been gashed to the tune of 5.98 yards per carry to opposing running backs this season. Gore’s carries have increased in each of his last four games, and he posted Miami’s first 100-yard rushing game of 2018 in last week’s overtime victory against Chicago. Further cementing Gore’s workload was Drake’s overtime fumble on the goal line that nearly cost Miami the game. Gore may not have the RB1 ceiling he did for so many years, but his workload and the matchup make him a very solid Flex play in this matchup. I think Frank Gore makes for an excellent Week 7 running back sleeper.