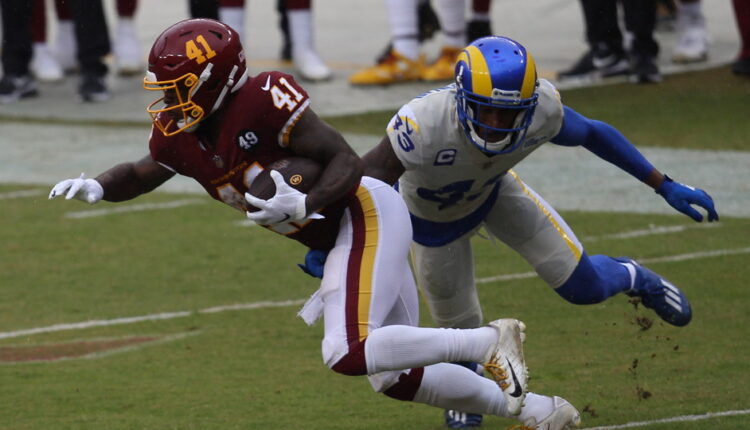 When identifying potential sleepers, snap count and target share is the name of the game. The difference between a player being a sleeper or just some bench piece is a very fine line. It is all about how productive a player can be with the limited looks that they receive. It is also important to consider their matchup and their team’s offensive scheme. The conclusion of Week 4 has left us with some more useful data points. Based off of that, here are four candidates who could turn themselves into NFL Week 5 sleepers.

If you haven’t heard yet, James Robinson is back. The undrafted free agent looks just as good now as he did before last season’s Achilles injury. Etienne is back from an injury of his own. Both runners look healthy, but it’s been Robinson that has wowed thus far. That could all change this week when the Jaguars look to rebound against the Houston Texans. A short year ago this matchup would have been one that we all could have slept through. This season I believe it’ll be different. Both teams have shown the ability to put points on the scoreboard. An above-average projected total puts Etienne right in the mix to be one of my Week 5 Sleepers.

Not only should points be scored in this one, but Jacksonville running backs should have the bulk of the success. The Texans currently rank 2nd worst against fantasy running backs. I think that it’s likely that both runners are able to get into a rhythm against the Texans. Let’s not get it twisted though, James Robinson is the lead back. But I think it’ll Etienne who find the end zone for the first time this year. This Jaguars team is for real this year. They had real upset potential last week against the undefeated Philadelphia Eagles, so they should easily handle the Texans. If the game gets out of hand, we could even see Travis top his high mark of 13 rush attempts.

The injuries are beginning to pile up on the offensive side of the ball for the Buffalo Bills. Most specifically the wide receiver position. The Bills have lost Jamison Crowder to a broken ankle, he’s out indefinitely. Isaiah McKenzie also suffered a head injury last week in the Ravens game. After the shocking mishandling of the Tua situation, the NFL is now under a microscope in respect to how they’re dealing with head trauma. That being said, it wouldn’t be shocking to see McKenzie held out next week. If Isaiah sits then Shakir’s Week 5 sleeper potential rises exponentially.

In a game that saw 2 wide receivers exit early, Khalil Shakir was able to contribute with two catches for 23 yards on two targets. The Bills are likely going to be down some offensive pieces this week against the Pittsburgh Steelers. Somebody other than Diggs is going to have to step up and produce. The 100% completion rate was a good enough showing for me to throw Shakir’s name into the hat. The rookie has been seeing a lot of action on special teams, he should get a chance to make a name for himself against a Steelers secondary ranked 8th worst against fantasy wide receivers.

If you didn’t know, Mike Boone actually thought that last year would be his chance to get consistent snaps and carries. The time he spent in Minnesota he did as an emergency backup. Dalvin Cook hardly ever left the field. Then the team went out and got Alexander Mattison who you really can’t tell apart from Cook when he’s out of the game. So that basically crushed any hope Boone had in becoming “a guy” with the Vikings. However, when he signed with the Broncos, there was a clear path to carries. That was before the team drafted Javonte Williams.

How aggressive are you going to get to pick up Mike Boone off waivers? (@SUBWAY) pic.twitter.com/rP7NipLkho

Fast forward a year later and Mike Boone is back in the position he thought he was walking into. Unfortunately, Javonte Williams suffered a season ending knee injury in last week’s game versus the Las Vegas Raiders. For Boone, it means a clear path to carries as it is unlikely that the Broncos will ask an almost 30 year old Melvin Gordon to shoulder a full season’s load. Boone had already been getting worked into the game here and there. Things amped up a bit after Williams went down and the Broncos called his number four times. He ended up with 20 yards on three carries, adding an additional 9 yards on one reception. As far as Week 5 sleepers go, Boone definitely isn’t the sexiest pick, but I’m fairly confident that he can make a little splash against a Colts squad that just doesn’t look right.

Let’s hope this Week 5 sleeper pans out because Brian Robinson can come back any minute now. It’s pretty clear, at least from what we saw in the preseason, that Robinson has the coaching staff’s blessing. You can tell by their reluctance to let Antonio Gibson be the guy. This past week the Commanders deployed a three-headed running back committee. That’s never any fun to try and figure out, so it’ll definitely be a good thing for fantasy managers if Rivera just gives all the work to Brian Robinson went he’s able to return. It’s never that simple though, is it?

Thanks to J.D.’s natural pass-catching abilities, his role on the offense is likely secure. Antonio Gibson is a gifted pass catcher as well, his only problem has been holding on to the ball after he makes the grab. This past week the Commanders gave Jonathan Williams five carries which he turned into 48 yards. If Robinson is indeed out this week I believe the Commanders will deploy a similar strategy. The one thing that has me confident that McKissic comes out on top of this committee this week is the matchup. The Commanders will square off against the Titans this week, and I’ve got this funny feeling that Derrick Henry is going to run for a million yards and twice as many touchdowns. If the Commanders are forced into a game script where they have to air the biscuit, then it’s McKissic who stands to benefit the most.