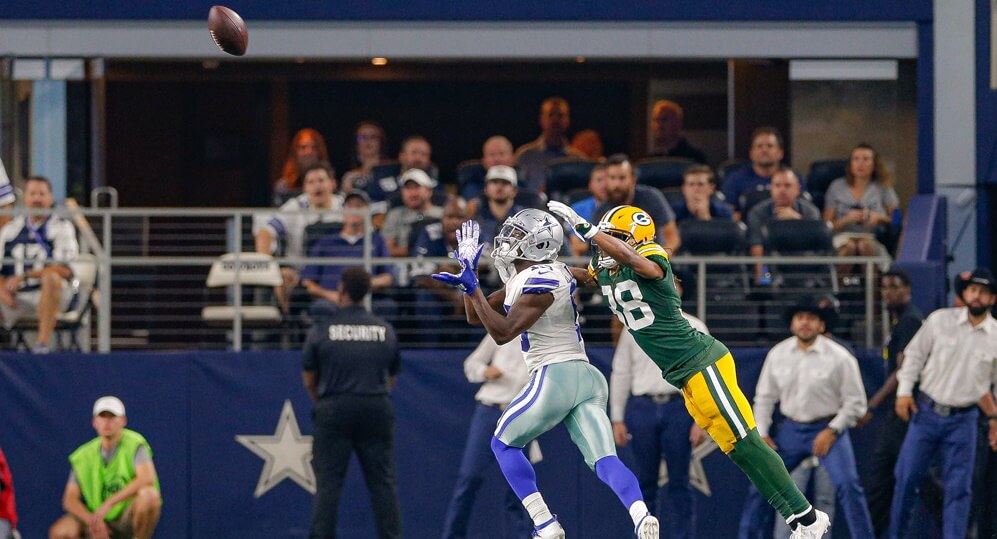 There were some huge blow-up performances as well as a few huge disappointments on Sunday, and there were likely many big margins of victory across fantasy leagues this week. Here are some key Week 5 fantasy football takeaways to apply to Tuesday’s waiver runs and in projecting fantasy production going forward.

Take a look back at Meng’s takeaways from Week 4.

Breaking Into a Gallup

The Cowboys lost right tackle La’el Collins to an MCL sprain against Green Bay, compounding their offensive line woes, already missing left tackle Tyron Smith with a high ankle sprain. Yet despite at one point trailing 24-0 in the third quarter, Dak Prescott was able to mount a comeback in an eventual close loss even against a relentless Packers pass rush. Amari Cooper led all receivers with 11 catches for 226 yards and a touchdown, but Michael Gallup tied Cooper in targets against Green Bay with 14 and had a big day of his own with seven receptions for 113 yards and a score.

With the Jets’ porous secondary coming up, Gallup should see plenty of opportunities for another big performance. Then in Week 7, Dallas will face an Eagles secondary that led the league in fantasy points allowed to opposing wide receivers through four weeks. This is a productive Cowboys offense that should only get better once their offensive line gets healthy. Gallup was dropped in quite a few leagues after undergoing meniscus surgery earlier in the season and should be a priority add for teams in need of help at wide receiver as a WR3 with upside.

Cincinnati remains winless and lost to Arizona after allowing David Johnson and Chase Edmonds to combine for 159 yards and a score on the ground and an additional 83 yards through the air. The Bengals have allowed the most fantasy points to opposing running backs through five weeks and show little signs of improvement. Mark Ingram has RB1 upside in Week 6 against the hapless Bengals and Gus Edwards is a desperation flex in deeper leagues for teams desperate for running back help if the Ravens get up big early in the game.

On the other hand, Atlanta’s ranking against opposing wide receivers has been deceptively good up until now. They allowed less than 100 yards combined to Adam Thielen and Stefon Diggs in the season opener due to the Vikings’ early lead and run-heavy game script. Then the Falcons faced a banged-up Eagles receiving corps that was without both DeSean Jackson and Alshon Jeffery. However, the Falcons have now been decimated by the Titans and Texans to the tune of over 650 receiving yards and eight receiving touchdowns over the last two weeks. With the pass-happy Cardinals coming to town in Week 6, Larry Fitzgerald and Christian Kirk, if healthy, could both have season-high receiving totals.

No, not like that. We’re talking running back handcuffs. On Sunday, Christian McCaffrey continued to astound, even with Cam Newton sidelined with his Lisfranc injury. McCaffrey carried the Panthers to a close victory over the Jaguars with 176 yards and two touchdowns on the ground and another 61 yards and a score through the air. But lost in the win was the fact that McCaffrey was sidelined late in the game with cramps. While cramps aren’t a concern for McCaffrey to miss time next week at Tampa Bay, the injury did allow us to see Reggie Bonnafon filling in for a couple of series. Bonnafon looked more than competent, even scoring a long 59-yard touchdown. He’s a top-priority handcuff for deeper leagues and perhaps even worth stashing in shallower formats as well, as he would have RB1 potential if McCaffrey were to miss any time.

Another backup performed admirably as well this week, with Chase Edmonds rushing eight times for 68 yards and a touchdown and adding three catches for 18 yards in the passing game. David Johnson produced fantasy RB1 numbers during the Cardinals’ win over the Bengals, rushing for 91 yards on 17 carries and adding three catches for 65 yards. However, Johnson played through a minor back injury. While not considered serious, back injuries can recur or flare-up, and Johnson already missed part of the game against Baltimore in Week 2 with a wrist injury. If Johnson were to miss any time, Edmonds would have RB1 upside similar to Bonnafon.

Bonnafon and Edmonds are both handcuffs worth adding in deeper leagues. Others in consideration who are already rostered in shallower formats include Tony Pollard, Alexander Mattison, Gus Edwards, Jaylen Samuels, and Jordan Wilkins. Teams with a winning record and strong starters should consider rostering these high-upside handcuffs over middling depth players.

Christian McCaffrey stole the show in Week 5 when the Jaguars and Panthers met, but Leonard Fournette had a nice fantasy day as well with nearly 150 scrimmage yards and a touchdown. As mentioned last week, though D.J. Chark is Gardner Minshew’s preferred target, Dede Westbrook still offers WR3 upside in PPR given his continued target share. Speaking of Chark, he is quickly becoming a must-start wide receiver. Three of their next four opponents prior to their Week 10 bye are the Saints, the Jets, and the Texans. All three are currently top-10 in fantasy points allowed to wide receivers, meaning this Jacksonville offense could really explode. Westbrook is worth adding in deeper leagues for teams in need of help at the wide receiver position, and if any league mates still think Chark is a flash in the pan, he’s a definite buy-high trade target.

While the Ravens doubled Odell Beckham Jr. in their Week 5 matchup to force the Browns to advance the ball with other players, the strategy backfired, as Jarvis Landry and Nick Chubb each had over 150 yards from scrimmage, with the latter scoring three touchdowns as well. As long as Landry, Chubb, and the rest of the offense are playing well, opposing defenses are unlikely to commit as much coverage to stop Beckham as Baltimore did. Though the 49ers are playing better on defense to start the season and will probably get starting safety Jimmie Ward back for the Monday night matchup against the Browns, they’ve already given up four receiving scores in three games and are hardly a shutdown unit. Beckham is in good position for a bounce-back performance in primetime and is a buy-low if owners are worried.

The Rich Get Richer

Tevin Coleman is likely to return on Monday night after having practiced most of the week, and his snap share and usage against Cleveland will be something to monitor. There’s plenty of fantasy production to be had in Kyle Shanahan’s efficient ground game, and whichever running backs emerge in the San Francisco backfield will be fantasy-relevant. Tyreek Hill is also due back in Week 6 after returning to practice, and after struggling against the Colts defense with Sammy Watkins out for most of that game with a hamstring injury, Patrick Mahomes will be glad to have Hill back. This is the last chance to potentially trade for Hill, and both LeSean McCoy and Damien Williams should also be trade targets. Once Kansas City’s offense returns to elite status with Hill returning and left tackle Eric Fisher due back in the coming weeks, the running backs should have more scoring opportunities and more targets in the passing game with less need to stay back and help block.

What are your key takeaways from Week 5? Let us know in the comments below!