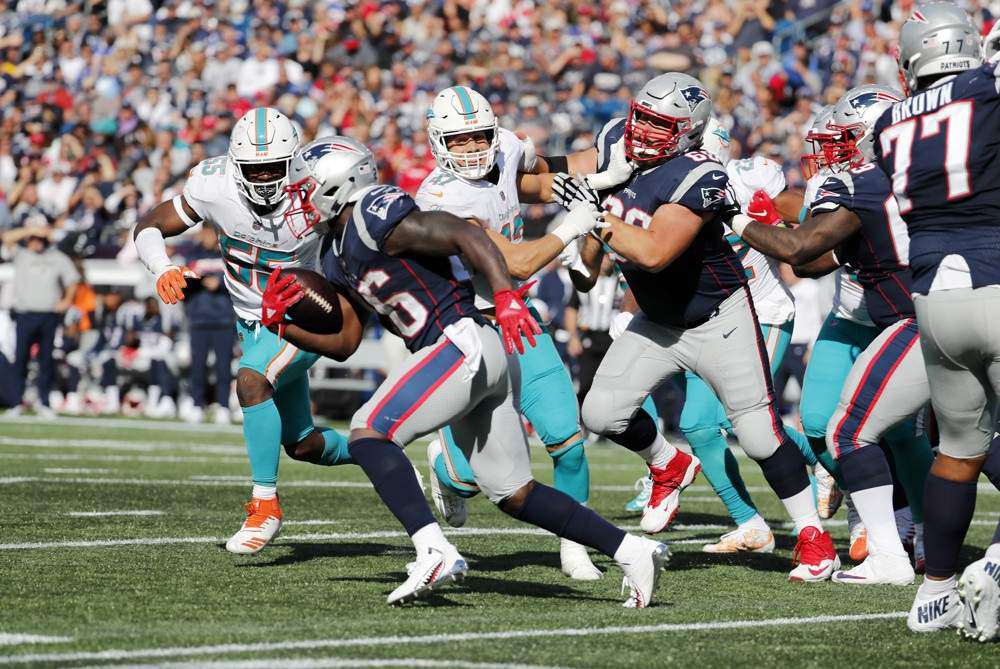 Taking a look at the Week 4 touches and targets leaders can go a long way in projecting where fantasy points may come from in the near future. Each week I’ll break down which running backs led the way in touches, including red zone opportunities. Most of the top performers in touches and targets from a week-to-week basis are not only owned in most leagues, but started as well. This will give us a clearer view of where touchdowns may come from. A plus for the DFS players out there.

Sony Michel led Week 4 with 25 caries and he was second in touches despite having zero catches. After setting career highs in carries and yards last week, Michel doubled his yardage total from 52 to 112. He also found the end zone and now has 11 red zone rushing attempts (seventh most) in his three NFL games.

Michel benefited from the loss of Rex Burkhead who was placed on the IR last week. Burkhead is expected to return at some point this season, but does it even matter? The Patriots spent a first round pick on Michel for a reason. It was very good to see Michel productive in the same game as James White who had 16 touches (eight catches). White will always be involved in the passing game, but Michel is a lock for carries and red zone work. Remember when LeGarrette Blount had 71 red zone rushing attempts and 16 touchdowns inside the 20? It seems like we may not have to figure out this backfield anymore. Both can be started.

Chris Carson was a surprise scratch last Sunday and Mike Davis surprised everyone with 21 carries and 25 touches. Davis totaled 101 rushing yards and had another 23 through the air. He finished as RB3 in standard formats and RB6 in PPR leagues. Seattle coach Pete Carroll says Davis earned a spot in the rotation going forward, which likely means a committee between him and Carson when he returns. There’s no update on Carson, but he was reportedly close to playing in Week 4. The big takeaway here is that there really is no use in holding onto rookie Rashaad Penny. We now have an idea of what to expect if Carson misses more time. Davis played 71 percent of the snaps, while Penny logged 24 percent.

Duke Johnson Jr. tied a season-high with six touches last week and Nick Chubb had his best showing of his career. Even still, Carlos Hyde finished with the seventh most touches in Week 4. Chubb may have earned more work as he totalled 105 yards on three rushing attempts while finding the end zone twice. Duke will also always be featured in a third-down role so Hyde will see a huge decline in the passing game this season compared to last season. With all of that said, there is nothing to worry about when it comes to Hyde as you’ll see below he’s fourth in overall touches and third in red zone rushing attempts. He’s the man in Cleveland.

It sounds like Leonard Fournette will be sidelined for a couple weeks due to a hamstring injury. He could also just be dinged up all season long which will be a headache for owners. If Fournette sits, Yeldon is a lock for a heavy work load. Nobody ran the ball more than the Jaguars last season and Yeldon adds a nice element to those in PPR formats. He has 14 catches on 22 targets with three total touchdowns this season.

Jordan Howard was very disappointing last week as he finished third on his team with 25 rushing yards. His 11 caries were two behind Tarik Cohen and he finished with 28 fewer rushing yards. Cohen also had eight targets, seven catches and 121 yards through the air. Howard had been involved in the passing game, but failed to reel in his only target in Week 4. Maybe more disappointing was the fact Howard never racked up work when his Bears were up big on the Buccaneers. Howard still played 54 percent of the snaps last week and despite a brutal showing, he’s still Top-10 overall in touches. If you’re unhappy with his production, don’t sell now. Wait until he has a solid game. In fact, I’d be buying Howard stock.

Keke Coutee led all wideouts with 15 targets and 11 catches in what was his first NFL game. Coutee racked up 109 yards after missing the first three weeks due to a hamstring injury. Now Will Fuller is dealing with a hamstring injury (again). Deshaun Watson keeps getting better with each game and 60 percent of his targets have gone to DeAndre Hopkins and Fuller. Even if Fuller plays this week, Coutee is worth an add based on upside alone, but it’s hard to imagine him finishing Top 10 in targets again. Having said that, the Texans have an uptempo, high powered offense and they don’t really throw to the tight end. Coutee provided a solid safety valve for Watson last week, with a few slats and bubble screens. He’s probably more suitable for PPR formats, but he’s explosive in open space. Fuller is also not the most reliable guy.

Corey Davis appeared in the Top 10 in targets after Week 1 and I declared a big season for him. Davis struggled in the next two games, one of which came against Jacksonville and he was dropped in leagues. The FantasyPros consensus had him outside the Top 40 last week, and if you’ve been reading you know he was ranked much higher for me. He was also considered one of the better buy-low targets in the league. Delanie Walker is out for the season and Rishard Matthews was released last week. Davis’ 39 targets are 18 more than the next closest on his team (Dion Lewis). The Titans’ wide receiver is in for a lot of work and could very well finish inside the Top 10 in targets by the end of the season.

Tyler Boyd is turning out to be one of the better waiver wire pickups of the season. Boyd caught 11 of his 15 targets for 100 yards last week. It was his second week with at least 100 yards and third with at least 91. Boyd leads the Bengals with 36 targets, 26 catches and 349 yards. He also has two touchdowns. Andy Dalton is locked into Boyd who has looked amazing running routes out of the slot.

This was after Week 2…how quickly things change as Ross is hardly worth a roster spot.

Derrick Henry has 54 carries and 58 touches compared to Dion Lewis’ 43 carries and 61 touches. Lewis has out-gained Henry (259 yards-175 yards) and he’s played more snaps. Lewis ranks second on the Titans in targets and catches, plus he’s been more efficient on the ground than Henry. It’s hard to find a reason to put Henry in the starting lineup, but there may be reason to hold on in deeper formats. Should anything happen to Lewis, Henry would be in line for 20 plus touches a week and he still has value due to his work in the red zone. Right now it seems every time he touches the field, the opposing team knows a run is on the way. Game script will hardly ever be in favor of the Titans, but if there is a week that lines up for him, it’s this week against the Buffalo Bills.

Eric Ebron leads the Colts with eight red zone targets and three total touchdowns. Two of the three have come inside the red zone. For all the hate he receives in the fantasy community, he’s been given a lot of play this season. Ebron’s 30 targets rank second on the team and he’s an option for Andrew Luck when they get near the goal line. Luck’s 186 passing attempts are the second most in the NFL and with no run game or defense, expect him to continue to chuck. Jack Doyle has missed two straight games and I wouldn’t count on him playing Thursday. T.Y. Hilton will also likely be sidelined.

Like these Week 4 NFL Picks? Get more Chris Meaney on his new podcast, By Any Means. Each week he’ll bring in guests from around the industry to break down all the fantasy news you need to know for your march to the championship.