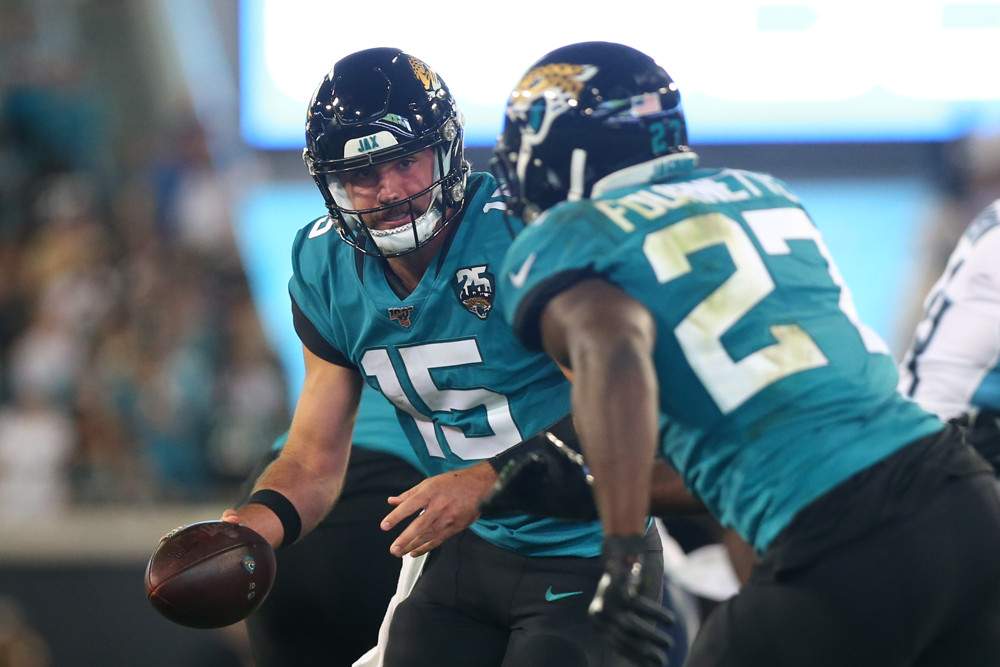 There have been upsets galore in Week 4, with 11 away teams having won their games on the road through Sunday night. Here are some key Week 4 fantasy football takeaways to apply to Tuesday’s waiver runs and in projecting fantasy production going forward.

Take a look back at Meng’s takeaways from Week 3.

The legend of Gardner Minshew II grows with a road upset at Denver this week, even with the defense missing Jalen Ramsey. It should take consecutive bad games from Minshew at this point for Jacksonville to even consider going back to Nick Foles, even if he’s healthy. But despite his real-life performance, Minshew has been just a QB2 in fantasy, albeit with a high weekly floor thus far. He is in consideration as a streaming option depending on the matchup, but the bigger impact is his admirable playmaking making Jacksonville players fantasy relevant again without relying on garbage time.

Of course, Leonard Fournette played a big part in the win against the Broncos as well, finally turning his workhorse usage into a productive ground game with 225 rushing yards. And while those who added D.J. Chark in past weeks might be disappointed, Dede Westbrook still leads the team in targets through four weeks despite Minshew’s chemistry with Chark. Though Chark may have more weekly upside at the moment, Westbrook is available in many leagues and could still emerge as the season progresses. For now, Westbrook is a flex option in PPR who may be worth a stash in leagues with deeper benches.

Browns fans are ecstatic about leading the AFC North through four weeks, but their success is little consolation to those who drafted Odell Beckham Jr. in fantasy. Beckham has just one game with over 100 yards and just one touchdown thus far, and though Week 4 was his first game with fewer than six catches, the trend in his declining target share is concerning. He started with 11 in Week 1, 10 in Week 2, nine in Week 3, and had just seven targets against Baltimore. Even though the Ravens concentrated coverage on him, it’s still a bit concerning that Baker Mayfield didn’t get him a few more targets given Beckham’s ability in contested catch situations. However, Beckham does have very favorable matchups in the second half of the season, and this Browns offense seems to be getting on track, so there shouldn’t be any panic.

On the other hand, Jarvis Landry finally showed his upside. Much like Fournette discussed above, the usage had been there, but it took a few weeks for the production to catch up. Landry remains a boom-or-bust flex play for Week 5 against San Francisco on Monday night assuming he clears concussion protocol, which he has a good chance to given that he has the extra day. Nick Chubb is a clear RB1 with huge weekly potential given his workhorse role, involvement in the passing game, and ability to break a big play on any touch. While no one is suggesting that Chubb should be a sell in fantasy, bear in mind that Kareem Hunt is eligible to return from suspension in Week 10 and could eat into Chubb’s workload later in the season.

The Rich Get Richer

San Francisco and Kansas City are both unbeaten but look to become even better with an auspicious return expected for each team. The 49ers sit alone atop the NFC West for now with a 3-0 record, and they may get a boost to their already dangerous run game in Week 5. Reports out of San Francisco indicate that Tevin Coleman, who suffered a high ankle sprain in the season opener, may be ready to return for a crucial Monday night matchup against Cleveland.

While both Raheem Mostert and Matt Breida have played well during Coleman’s absence, Mostert lost a fumble in their last game, and Breida tipped a catchable pass into a defender for an interception. Neither one is locked into a starting role. Upon his return, Coleman has a good chance to contribute in this backfield that’s proven efficient for fantasy scoring, especially given Breida’s injury history as well. Coleman is available on waivers in quite a few leagues.

In the AFC, the Chiefs seem destined for another playoff meet up with the Patriots, as both remain undefeated and battle for the top seed in the conference. Kansas City struggled on offense against the Lions, but as scary as it sounds, their already elite offense be even better upon the return of Tyreek Hill, who suffered a sternoclavicular dislocation in Week 1. Hill looked good warming up prior to the game in Detriot, and he could return as early as Week 6 if fully healed.

Hill is a great trade target for teams with a winning record and looking ahead, especially if the current Hill owner has a losing record and needs wins now. Hill’s return would also open up the entire offense, increasing the fantasy ceilings for Sammy Watkins, Travis Kelce, and the Chiefs’ backfield. Speaking of the Patriots though, Benjamin Watson’s return from suspension in Week 5 should also be noted for teams in need of help at tight end, especially with Julian Edelman still recovering from his chest/rib injury and the offense having struggled to advance the ball against the Bills.

The Raiders upset the Colts in Week 4, but Jacoby Brissett had his best fantasy outing yet despite throwing an ill-timed pick-six late in the game. The Colts travel to Kansas City in Week 5, which should be another good matchup for Brissett, keeping him in the streaming conversation. After their bye, the Texans come to town in Week 6 and present another favorable matchup with their secondary having struggled thus far on the season. And though Marlon Mack left the game against Oakland with an ankle injury, he’ll be a great play with RB1 potential if healthy against a Chiefs run defense that has allowed back-to-back 100-yard rushing games. Even if Mack is ruled out for Week 5, he remains a trade target for the rest of the season given his heavy usage on the ground.

The Legion of Gloom

The Seahawks handled the Cardinals with ease, not allowing a passing touchdown for the first time all season. But despite the strong showing against the rookie Kyler Murray, this Seattle unit will be facing a much harder test on a short week. The Rams come to CenturyLink Field for Thursday Night Football this week, the same Rams team that just scored 40 points against Tampa Bay. The good news is that Los Angeles also allowed 55 points to the Buccaneers, and there should be plenty of fantasy production on both sides in Week 5.

Even after quiet days for Russell Wilson, Tyler Lockett, and Will Dissly in a game where the Seahawks led all the way and didn’t need to throw much, all three should find their way back into lineups for this tempting matchup against the Rams. D.K. Metcalf and Chris Carson are also in consideration, though Rashaad Penny’s return could eat into Carson’s usage.

It Turns Out You Can Spell Elite Without Eli

Daniel Jones led his team to a second straight win over Washington this week, but expectations should be tempered for all Giants players with Minnesota and New England up next. With both defenses stout against both the run and the pass, Wayne Gallman is just a low-end flex for these two games, though his involvement in the passing game and red-zone usage gives him a decent floor. And while Sterling Shepard and Evan Engram continue to command the highest target shares and should still be serviceable in PPR formats, both should be downgraded in these difficult matchups coming up.

What are your key takeaways from Week 4? Let us know in the comments below!