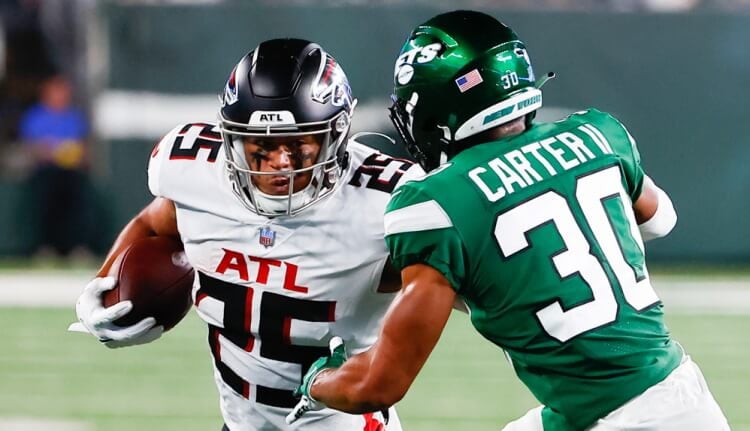 When identifying potential sleepers, snap count and target share is the name of the game. The difference between a player being a sleeper or just some bench piece is a very fine line. It is all about how productive a player can be with the limited looks that they receive. It is also important to consider their matchup and their team’s offensive scheme. Weeks 1-2 have left us with some interesting data points. Based off of that, here are four candidates who could turn themselves into NFL Week 3 sleepers.

Denver’s number 2 WR Jerry Jeudy was forced out of Sunday’s game early due to a chest/sternum injury. Jeudy did not come back into the game despite being labeled questionable to return. It was WR Tyrie Cleveland that was the next man up in Jeudy and Hamler’s absence, but I expect that if healthy Hamler takes on the larger role. Hamler was ruled out of the Week 2 matchup versus the Texans with a knee/hip injury.

If he misses time KJ Hamler will take the slot snaps.

Here’s why this matters:

Hamler might not be as beat up as we think though; “part of his maintenance,” said Denver head coach Nathaniel Hackett when asked about Hamler’s inactive status. “We want to make sure that we get him as many games as we can.” KJ does not have a reception to his name right now, making him one of the riskier Week 3 sleepers on this list. Hamler who played on 60% of snaps in Week 1 was only targeted once by Russell Wilson, but with the lack of receiving options, Wilson may be forced to look Hamler’s way early and often.

When you’re sizing up Week 3 sleepers, you’d like to see an increase in snap count or at least an increase in usage. Tyler Allgeier had both. After having zero rush yards on zero rush attempts, Tyler Allgeier enjoyed 1o carries, which he took for 30 yards. Allgeier has yet to be targeted in the passing game. The uptick in usage is promising to see. We know that this offense moves through Cordarrelle Patterson and Kyle Pitts. Well, just Patterson lately (I told you not to draft Pitts here).

With C-Patt running around like a chicken with his head off trying to do it all for his team, he’s bound to need a breather. We see it all too often out of our top fantasy performers. Your guy does all the work getting the ball to the one-yard line, only for some guy to come off the bench and punch it in. 30 yards on 10 carries isn’t the worst, but Tyler Allgeier knows that if he’s to continue to see these opportunities that he’ll have to cash in on them going forward.

He probably shouldn’t have been on your redraft roster before this week. But if you’ve got him then this could be a sneaky spot to throw him in your lineup in place of an injured Dalton Shultz or a banged-up George Kittle. Likely is a unique sleepers selection because he actually saw his snap count decrease from Week 1. In his debut Likely was on the field for 45% of snaps. However, in Week 2 that number fell to 36%. Likely’s appearance on the Week 3 sleepers list is due to the fact that his targets increased and he was much more productive with those looks.

TE 1. Isaiah Likely with catch number 1 of many. Kids going to be a stud pic.twitter.com/CtZ2Upj38F

In Week 1 the rookie was targeted four times, he reeled in zero of those passes. This past week, Isaiah was able to turn five targets into 43 yards. What makes Likely so dangerous is his presence on the field whenever his team enters the red zone. Lately the Ravens have been resorting to the ground attack when they get inside the 20. The Ravens face the Patriots in Week 3. With Bill Belichick famous for taking away a team’s best option (Mark Andrews in this case), it’s likely that Isaiah finds himself with some extra room to operate.

This pick enters the deep sleepers category for sure. Trusting Baker Mayfield to deliver is like trusting the FEDEX man to honor the 2-day delivery you paid extra for. Baker lied to us in Week 1 when he stated that he was going to “[Explicit] the Browns up.” Then he followed up that subpar showing with an uninspiring effort against the New York Football Giants. So why should Week 3 be any different? Honestly, it probably won’t be. And we don’t need it to be. We just need for Smith to be “the guy” this week. Week 1 saw Robby Anderson score, in Week 2 it was DJ Moore. Week 3? That’s TBD.

Once again here’s a Week 3 sleepers candidate who saw his snap count decrease. Smith’s decrease in playing time wasn’t that noticeable and probably had something to do with the game flow. He went from 77% in Week 1 to 71% in Week 2. This was likely due to the Panthers wanting to take advantage of the Giants’ suspect run defense. Which they did, CMC totaled 102 yards on 15 carries. Although he was on the field less, Smith saw more targets (six) than he did in Week 1 (3). The unfortunate portion is that he was only able to reel in one of those balls, just like in Week 1. Admittedly this is more of a desperation dart throw than anything. Baker Mayfield is most likely on the hot seat already after being handed back-to-back L’s. He’ll need to pull out all the stops in his Week 3 matchup against New Orleans. Hopefully the speedy WR gets a look or two downfield.