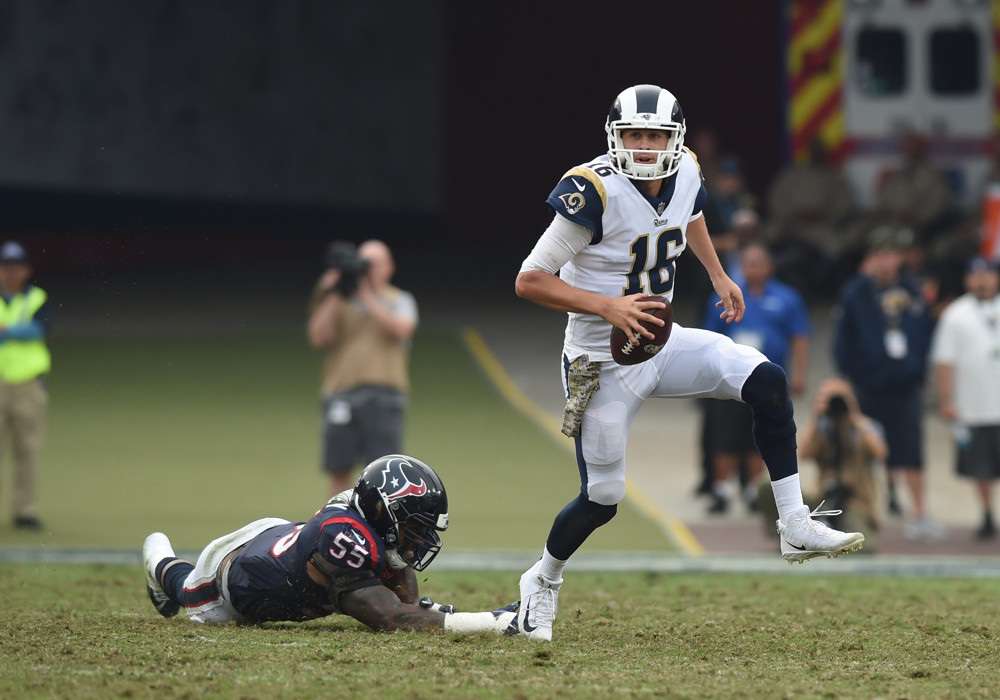 Last week provided plenty of video game numbers from several quarterback sources. Seven signal callers accounted for at least four touchdowns, led by the six touchdown throws by Patrick Mahomes. I will remember the days of considering Patrick Mahomes a sleeper fondly. Those were good times. I just hope the world doesn’t completely forget his father’s mediocre MLB pitching career. There was also an even dozen quarterbacks who had at least 300 yards passing. With so many prolific performances, quarterbacks are front and center in fantasy football. But there are still plenty of sleepers to be had. Here are some of my favorite Week 3 quarterback sleepers.

I am not entirely sure if a quarterback can be considered a quarterback sleeper when he has accounted for 854 yards and nine touchdowns through two games. Especially when he channels his inner Conor McGregor during his post-game presser. But people are still skeptical about Ryan Fitzpatrick. Perhaps that is because Fitzpatrick waits until he has fully and finally gained someone’s trust before he decides to turn back into a pumpkin and crap in their cereal. But this is not about Week 17 of the 2015 season. This is about Week 3 of the 2018 season.

The red-hot quarterback takes on the Pittsburgh Steelers in Week 3 on Monday night. As I mentioned last week, Pittsburgh has a reputation as a stout defensive unit, but that is simply not the reality. The Chiefs moved the ball at will against the Steelers last week. In his third career start, Patrick Mahomes had more touchdown passes (6) than incompletions (5). Fitzpatrick is in line for another huge effort in Week 3 as he continues to threaten to render Jameis Winston irrelevant upon his impending return from suspension.

I get the feeling that many owners will shy away from Jared Goff this week. He has not put up some of the crazy numbers that some of his contemporaries have, and the Chargers’ defense looked stout last week. But this is the same defense that Mahomes torched in Week 1 for four touchdowns and 9.48 yards per throw. The Rams have an elite offense and are essentially matchup-proof. They have scored at least 33 points in each game this season after leading the NFL in scoring a year ago.

Goff has not yet had a weekly top-12 Fantasy performance, but it is not as if he is struggling by any means. The position has just been that stacked so far. Goff has certainly held his own and has continued to play good football following his breakout season last year. He has thrown for 587 yards through two games, which is ninth in the NFL. If the Chargers, who have held Kareem Hunt and LeSean McCoy to 88 scoreless yards combined, can contain Todd Gurley, Goff will be tasked with getting the ball into the end zone through the air. I believe Goff will approach 300 passing yards and two touchdown passes, which would put him on the QB1 radar. Goff is one of my favorite Week 3 quarterback sleepers.

Blake Bortles lit up New England for 412 yards and four touchdowns on his way to a Week 2 QB4 finish. His 377 yards were the third-most he has ever thrown for in a game. Even more impressive from a fantasy viewpoint, he did not accumulate any of his 37.35 during garbage time. He was solid throughout, making plays with both his arm and his legs. A letdown does not figure to be in play in Week 3 against the division rival Tennessee Titans.

Tennessee has not been the defensive sieve that many defenses have been in the early stages of the 2018 season. However, they have not exactly clamped down on opposing passing games either. The Titans have allowed a crisp 9.0 yards per attempt to begin the season. Bortles may not repeat his Week 2 volume (45 pass attempts) if Leonard Fournette returns from his ankle injury. But I do believe that he is still a solid bet to put up a good Week 3 fantasy performance.

Seemingly lost in all the quarterback craziness that Week 2 provided was the fact that the week got kicked off in grand fashion when Andy Dalton threw for four first-half touchdowns against the Baltimore Ravens on Thursday night. Dalton finished as the overall QB8 for the week and looks to keep things rolling for Cincinnati when they travel to Carolina for a Week 3 tilt.

The number that makes me most optimistic when looking at Dalton’s prospects for this game is 42. That is the number of pass attempts Dalton had last week. This is important because Cincinnati led this game from start to finish. In fact, they had a double-digit lead for over 40 minutes of game action, and offensive coordinator Bill Lazor still entrusted Dalton to let it rip. As we all know, volume is king in Fantasy, and Dalton should have plenty of chances this week, particularly with the absence of running back Joe Mixon. Mixon will be out 2-4 weeks with a knee injury. While Giovani Bernard is certainly a serviceable stand-in, Mixon’s injury solidifies Dalton’s volume. Andy Dalton is what he is. That doesn’t mean he’s not one of the better Week 3 quarterback sleepers.

I liken Alex Smith to Jared Goff for a couple of reasons this week. Like Goff, Smith has yet to put up a weekly QB1 fantasy performance this season. Also like Goff, Smith has been totally serviceable and has played good football thus far. It is easy to forget that Smith was the overall QB4 last season. Considering Mahomes’ meteoric rise, most of the credit for Smith’s breakout 2017 is being given to Andy Reid and company. But Smith is a solid contributor in both real life and fantasy. He also gets a favorable matchup in Week when the Green Bay Packers come into town.

Green Bay was dismantled by Kirk Cousins and company in their Week 2 tie. Cousins exploded for 425 passing yards and four touchdowns. Those type of numbers are likely not in play for Smith in any given week, but Smith is in line for a fair amount of volume in what should be a competitive and high-scoring game. Smith does not make many mistakes with the football, and I expect him to take advantage of a vulnerable secondary and put up good fantasy numbers this week.