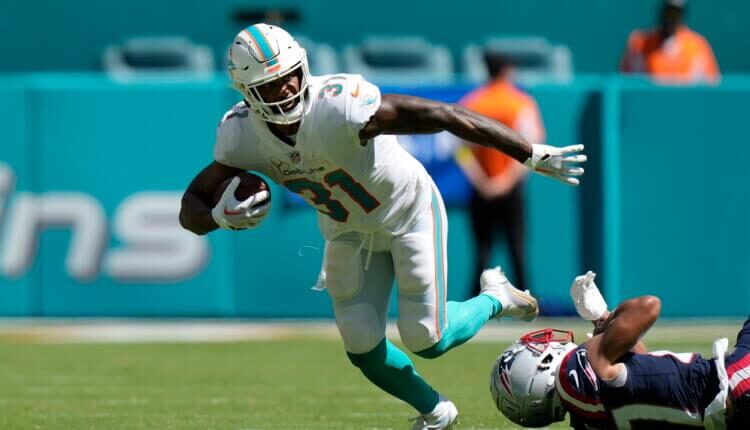 The NFL season is off to a fantastic start. We’ve had more close games and upsets in these first two weeks of the season, than I can remember all throughout last season. With those upsets, come valuable fantasy players that many expect to underperform. The goal of this quick article is to highlight three players each week that are likely to be found on the waiver wire, and can also be plugged into your starting lineup as a starter. As always, I’ll try and avoid the obvious plays.

Not enough is being made about how solid Joe Flacco has been. In Week 1, he threw for 309 yards, 1 TD, and 1 Int, on an astounding 59 PASS ATTEMPTS. Last week, the Jets got their 1st win of the season against the Browns, and Flacco threw for 4 TDs, 307 yards, on 44 pass attempts. In Week 3, the Jets face the Bengals. The Bengals defense has been inconsistent this season. In Week 1, they held Trubisky to under 200 yards passing, and Najee Harris to under 30 yards rushing, but still managed to lose. Last week, the defense managed to let the Cowboys’ backup (Cooper Rush) throw for 235 yards and 1 TD, and let Elliott/Pollard combine for ~100 yards, in a loss. I imagine last year’s AFC Champions will eventually make the necessary adjustments to get back in the win column, but it’s going to be difficult against a Jets team that is constantly throwing the ball. This will be the first QB that the Bengals have faced all season that has the ability to light them up. I think they’ll fail that test. I expect over 300 yards passing and 2 TDs from Flacco.

The Cardinals offense is certainly adjusting to the loss of the WR1, DeAndre Hopkins. He’ll be back soon, but until then, Kyler Murray has been running around, trying to buy time for broken plays. Last week, it worked, as the Cards managed to pull out the win. One beneficiary of Kyler Murray’s ability to scramble/create has been Greg Dortch. In Week 1 vs. KC, he had 7 catches on 9 targets, for 63 yards. The following week against Las Vegas, he had 4 catches for 55 yards, and 1 TD. It’s clear Kyler likes going to him in the slot, and I don’t think that will change in Week 3. Jalen Ramsey will likely be used to lock down Hollywood Brown, and A.J. Green will always have some success, but he can’t be counted on to carry a team anymore. Dortch will need to show up, and I think he’ll do so.

Uh…what the hell?! I was high on Tua before the season, but I’d be lying if I thought that he had the ability to throw for 6 TDs and 500 yards in a single game. When hitting on all cylinders, you’ll want a piece of this offense. If they can do what they did against a stout Baltimore defense, then you shouldn’t be scared of the Bills’ defense in Week 3 either. I don’t anticipate Mostert’s role to grow or shrink, but you need to have a piece of this offense, if you don’t already. Mostert had 11 carries for 51 yards last week, as well as 3 catches on as many targets, for 28 yards. Expect similar production in Week 3. If he finds the endzone, he makes for a great start in the flex, but he also has a relatively safe floor.

Fantrax was one of the fastest-growing fantasy sites over the last few years, and we’re not stopping now. We are the most customizable, easy-to-use, and feature-rich platform in the industry, offering the greatest fantasy experience for your dynasty, keeper, redraft, and best ball leagues. Fantasy sports doesn’t sleep, and neither does Fantrax, with seasons running 365 days a year. Take your fantasy leagues to the next level now at Fantrax.com!
2022 Weekly Streamers
Share