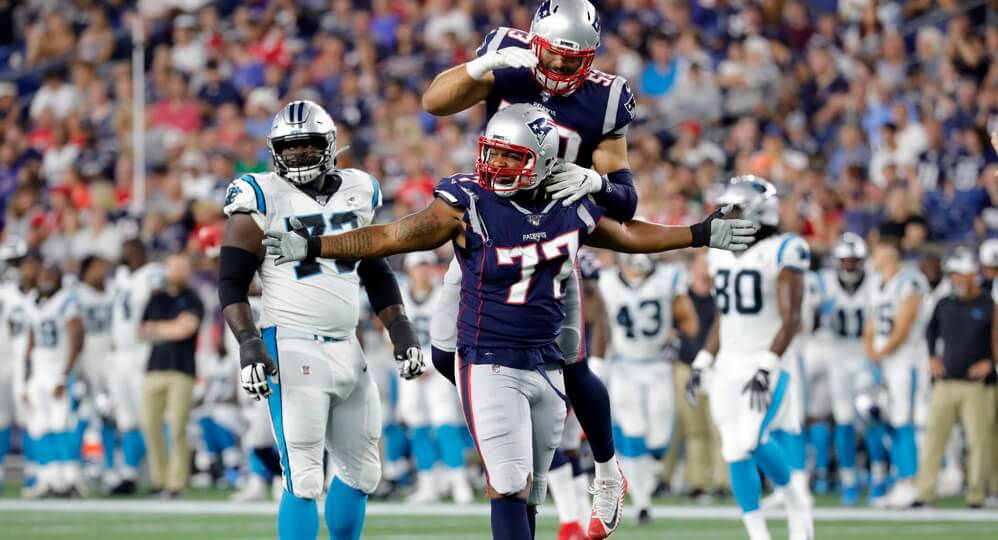 Each week Gary Davenport highlights the top IDP sleepers who can help you patch the leaks that invariably happen in your fantasy football lineups.

The last thing IDP owners need is to be going to the well early in the season—to be combing through the fantasy half-off bin searching for a player to start just as the season’s beginning. But if you were in that sort of bind in Week 1 and followed my recommendation in this article a week ago and started Cincinnati Bengals defensive end Sam Hubbard….

Playing on just over 80 percent of Cincinnati’s snaps against the Seattle Seahawks, Hubbard didn’t just have a good game—or even a great game. Hubbard had the best statistical outing of any D-lineman in the NFL—10 total tackles and two sacks.

The monster effort may have surprised many, but per Laurel Pfahler of the Dayton Daily News, Bengals head coach Zac Taylor wasn’t one of them.

“Sam’s breakout game, if you want to call it that, is one of the least surprising things I’ve ever seen because he’s been so consistent day to day,” Taylor said in his press conference Monday afternoon at Paul Brown Stadium. “He’s exactly the kind of player you love to coach and be around, and you’re combining talent with relentless effort, and that usually pays off. Some of the fronts that Lou presented yesterday put some of those guys in some pretty good one-on-one situations in the pass rush and the way they are sound fundamentally in the run game. Sam just capitalized on a lot of good opportunities, and it’s not at all surprising to see Sam have a game like that.”

This doesn’t mean that every one of my IDP sleepers will be a home run. Quite a few are going to be swings and misses. But it does demonstrate that’s it’s possible to get a big stat line from an unexpected source—provided you know where to look.

With that in mind, here are some Week 2 IDP sleepers who are owned in 20 percent or less of the IDP leagues at Fantrax.

At 33 years old, Bennett’s a lot closer to the end of his NFL career than the beginning. But as Darren Hartwell of NBC Sports Boston reported, new teammate Kyle Van Noy thinks Bennett’s first season in Beantown could be his best yet.

“I think, honestly, he has a chance to have a career year,” Van Noy said. “That’s my opinion. He looks like he’s as young and fresh as ever. The things that he’s able to do at every position, like, you never know where he could line up. He’s really good at what he does. He’s very disruptive. I’m happy he’s on our team. I’m tired of watching him do it to our offense.”

Bennett’s Patriots debut was quiet. Invisible, in fact—he didn’t record a stat in Sunday night’s win over the Pittsburgh Steelers. But Sunday Bennett and the Patriots travel to face the flaming wreckage of the rotting corpse of the Miami Dolphins. Bennett gets the 64th sack of his career. Maybe No. 65, too.

Like Bennett, Wake is well on the wrong side of 30. And like Bennett, Wake made his debut for a new team last Sunday. But where Bennett’s first game as a Patriot was a dud, Wake exploded for 2.5 sacks against the Cleveland Browns, earning AFC Defensive Player of the Week honors in the process. Not surprisingly, Wake told Jim Wyatt of the team’s website that his first game with the Tennessee Titans was fun.

“It was a crazy offseason, but I think I landed in the right place,” Wake said. “This organization has welcomed me with open arms and obviously I want to do my part along with the guys up front. And I think we did that today as a group. It was a lot of fun.”

The game made Wake, 37, one of 33 players to record 100 career sacks since they became an official statistic in 1982. Last year, the Colts were a miserable matchup for pass-rushers—Indy allowed just 18 sacks all season long. But both Melvin Ingram and Joey Bosa got to Jacoby Brissett last week, making Wake a bit more viable as a Week 2 spot-start.

When Avery Williamson tore his ACL in the preseason, Hewitt was thrust into the starting lineup at inside linebacker opposite C.J. Mosley. The fifth-year veteran told Olivia Landis of the team’s website that he planned to be ready to answer the call against the Buffalo Bills in Week 1.

“All of us prepare as a starter, so whenever your number is called, you expect to play at a certain level,” Hewitt said. “That’s how I prepare. Since my second year in the league, I’ve had coaches that say you have to prepare every game like a starter. I had roles in Miami where I had to elevate my game early on in my career. That’s the mentality that I’ve always had with Coach Gase.”

Hewitt did answer the call against the Bills, tying for the team lead with eight tackles and adding an interception. With Mosley now looking iffy to play against Cleveland after injuring his groin in the opener, Hewitt could see a boatload of tackle opportunities on Monday night.

Since Todd Davis went down with a calf injury in training camp, Jewell’s been tasked with functioning as the team’s No. 1 inside linebacker. Per Ryan O’ Halloran of the Denver Post, Broncos head coach Vic Fangio has been impressed by what he’s seen from the second-year pro.

“He’s been good,” Fangio said. “Josey’s been on top of his stuff from Day One. I think every day, although he’s been pretty sharp, he learns something new, a thing or two that’s new to him or an adjustment or a route that he hadn’t seen yet and it’s good for him. He’s doing very well.”

Not much went right for the Broncos in Monday’s loss to the Oakland Raiders, but Jewell’s play was a bright spot. Playing on all 59 of Denver’s defensive snaps. Jewell piled up 14 total tackles. Until Davis gets back, there’s no earthly reason why the former Iowa standout should be rostered in less than one in five IDP leagues.

The Raiders got a big win in Week 1 against the rival Broncos, but that win came at a cost—rookie safety Johnathan Abram will miss the remainder of the 2019 season after tearing up his shoulder in the game. However, fourth-year safety Karl Joseph told Justin Schrock of NBC Sports Bay Area that he’s confident Oakland’s other safeties will step up in Abram’s absence.

Since being drafted in the first round back in 2016, Joseph’s been something of a disappointment in Oakland. But with Abram out the former West Virginia star is going a bump in opportunities for IDP production—beginning Sunday against Kansas City’s lethal passing attack.

Vaccaro entered the 2018 season without a team. The former first-round pick entered 2019 with a brand-new four-year extension after filling in for the injured Johnathan Cyprien last year—a move that Adam Rank of NFL.com wrote over the summer didn’t get the run it deserved.

“(Vaccaro) and Kevin Byard form one of the best safety tandems in the NFL,” Rank said. “They are like any good tag team. Vaccaro is the talented headliner who makes you go “WHOA” at least once a game. Vaccaro is that enforcer who needs to bring the lumber from time to time. Kind of like the original Hart Foundation, where Byard is Bret Hart and Vaccaro is Jim “The Anvil” Neidhart.”

Just as in NFL circles, Vaccaro doesn’t get much notice in IDP leagues either—he’s available on the vast majority of waiver wires despite tying for the team lead last week in both total tackles and solo stops. The 28-year-old is set up well for another good stat line in Week 2 against a Colts team that ranked inside the top-five in fantasy points surrendered to defensive backs in 2018.

Got a few IDP sleepers of your own? Let us know about them in the comments below. You don’t get to say, “I told you so,” if you don’t tell us so. In the meantime you’ll also want to check out Joel Bartilotta’s Fantasy Football Waiver Wire and Scott Engel’s Week 2 FAAB Guide.