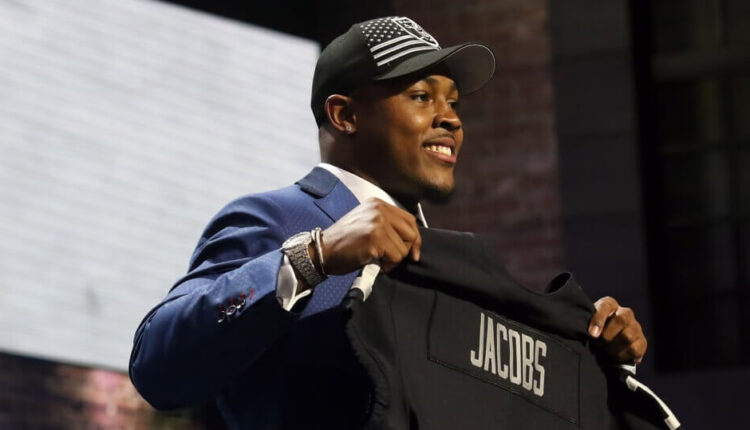 It’s important not to overreact to one week of game tape and stats, but do react. Much of our offseason expectations for a given player can be scrapped once we actually see how a coach is utilizing a player and how well that player is performing. Here are a couple of dynasty buys and sells to target in your leagues, but keep in mind the other team’s current situation when initiating trade talks. All the first-round rookie picks in the world won’t help you acquire Christian McCaffrey if the other dynasty GM is contending for a title, and don’t attempt to sell veteran contributors like T.Y. Hilton to teams clearly in a rebuild and not in position to vie for a championship this year.

Though Josh Jacobs is sure to cost a pretty penny for any dynasty teams looking to acquire him, he’s absolutely a player worth buying high. As crazy as it sounds, Jacobs’s three rushing scores on Sunday could actually create a window to buy in dynasty trades if any teams rostering Jacobs thinks his three-touchdown performance is an aberration. He’s unlikely to pull off a hat trick in most weeks, but Jacobs is a good bet to lead the league in rushing touchdowns this year considering that the Raiders boast a top-five offensive line.

On top of that, the key statistic to focus on is his reception total. Jon Gruden fooled many of us this offseason into thinking that he would continue to limit Jacobs’s involvement in the passing game. All indications pointed to the Raiders continuing to utilize a third-down back in tandem with Jacobs as they did in 2019 after the organization re-signed Jalen Richard, added Devontae Booker, and spent a third-round draft pick on Lynn Bowden.

Instead, Jacobs saw career-highs in targets and receptions in Week 1 against the Panthers, running 18 routes versus just five combined from Richard and Booker. Jacobs’s lack of involvement in the passing game as a rookie was the only limiting factor for his fantasy ceiling. If Gruden is willing to use Jacobs as a three-down back, that elevates both his weekly floor and gives him elite upside. Jacobs will cost multiple first-round rookie picks to acquire in dynasty trades, but he remains a bargain, as I’ve moved him up into the top-five overall in my dynasty rankings behind only Christian McCaffrey, Saquon Barkley, Ezekiel Elliott, and Clyde Edwards-Helaire.

James Conner couldn’t even go one whole quarter in 2020 before exiting the game with an ankle sprain. It doesn’t sound too serious, as Mike Tomlin noted that Conner could play in Week 2 against Denver. But that’s exactly why Benny Snell can still be acquired for a fairly cheap price in dynasty trades. Many dynasty teams could be convinced to part with Snell as a backup when Conner is expected back shortly. But even if Conner returns in Week 2, he can hardly be trusted in lineups, and the odds seem good that he will miss time again at some point this season.

Additionally, Snell arguably out-performed Conner in the game against the Giants. Conner opened the game with a slew of uninspiring runs, gaining just nine yards on six carries before leaving the game. Yes, the Giants boast a top-10 run defense with Leonard Williams and Dalvin Tomlinson anchoring the line, but the Steelers are fielding a top-10 offensive line of their own that made this a neutral rushing matchup at worst. Snell ran efficiently where Conner failed, finding the gaps and totaling 113 yards on just 19 carries.

There’s a chance that Snell could usurp the lead role from Conner at some point this year even if Conner manages to stay healthy. At the price of a second-round rookie pick, Snell could turn out to be a bargain not only as a high-value handcuff but as an eventual starting running back. Conner is also a free agent after 2020, and while Pittsburgh is likely to bring in competition in some form for the backfield, there are plenty of scenarios where the Steelers’ starting running back in 2021 is none other than Snell if he performs well this season.

Unlike James Conner, another player with injury concerns heading into 2020 did manage to make it through Week 1 unscathed. With DeAndre Hopkins traded to Arizona, Will Fuller was a target magnet against the Chiefs in Week 1 with the Texans trailing for much of the game. His 10 targets doubled the next highest Texan, Brandin Cooks, who saw just five targets. Fuller is a must-start wide receiver in fantasy for now after seeing an incredible 32 percent target share in the opener, akin to what Hopkins saw during his tenure in Houston.

If he can play a full 16 games this year averaging double-digit targets per game as the no. 1 receiver for Deshaun Watson, Fuller undoubtedly has the potential to finish the season as a top-10 fantasy wide receiver. But how long can we expect Fuller to hold up if he maintains this kind of workload? The fifth-year receiver has a well-document history of injuries; through four seasons, Fuller has missed 22 games.

For rebuilding dynasty teams, I’d look to sell Fuller for a 2021 first-round rookie pick as soon as humanly possible. For a contending dynasty team with little depth at the wide receiver position, there’s no issue in holding Fuller and starting him each week with confidence while healthy. But even then, I’d try to trade Fuller for a lesser receiver plus a rookie pick, perhaps a package like Parris Campbell or Mike Williams plus a future second-round pick.

Corey Davis put on a spectacular show against the Broncos on Monday Night Football, leading the Titans in receiving with seven receptions for 101 yards. Could Davis defy all expectations with a fourth-year breakout in 2020 like the miraculous fifth-year breakout we saw from DeVante Parker in 2019? It’s certainly within the realm of possibility, but it’s unlikely. Two major factors led to the surprise Week 1 performance by Davis.

First, former Pro Bowl cornerback A.J. Bouye was tasked with defending against A.J. Brown. With Brown struggling to get open early in the game, Ryan Tannehill went to Davis instead, finding him on three passes for 59 yards. Bouye then left the game with a shoulder injury in the second quarter, after which Bryce Callahan largely covered Brown on the outside with undrafted rookie Essang Bassey facing off against Davis in the slot. While there’s merit in the argument that Davis is due to see easier coverage, in general, this year with opposing secondaries concerned with stopping Brown, the 6’3 Davis is unlikely to feast as he did in primetime on Monday against a 5’9 undrafted rookie cornerback in his first career NFL start.

Moreover, Tannehill threw an astounding 43 pass attempts against Denver. In 11 games last season, Tannehill averaged 26 pass attempts per game and threw more than 30 passes in just three of those 11 games. The Week 1 showing could indicate more passing from the Titans in 2020, but it’s still a massive outlier with the offense likely to still revolve around Derrick Henry. While a healthy Davis could contribute more this season after playing through turf toe last year, passing volume remains a concern for all the Tennessee receiving options, Davis included. I would recommend selling for a 2021 second-round rookie pick if possible, as this may be your best chance to do so for the foreseeable future.