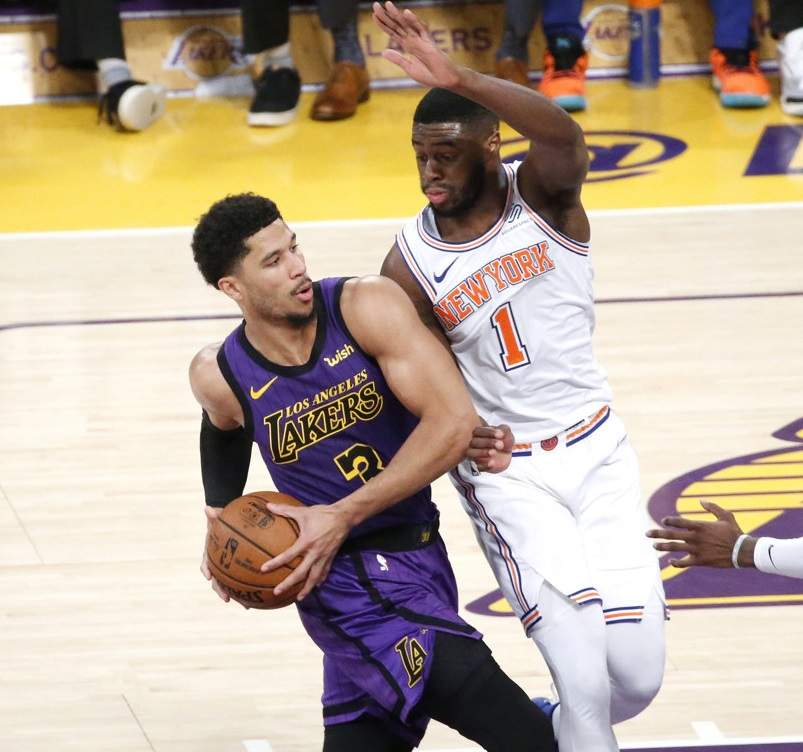 Week 14 is the official two-thirds mark of the fantasy basketball season. Fantasy Basketball Waiver wires are getting tough to sift through in terms of overall talent for the rest of the season. This week’s waiver wire offers options for all sorts of needs. There are young guns looking to lock up a role for the future, category specialists that can help your team right away and players filling in for injured veterans. Once again, these rankings are made with rest of season value in mind, and these players are all owned in under 60% of fantasy basketball leagues.

Huerter’s playing time has increased over the course of the season and is now a lock for 30-plus minutes. The Hawks are without Taurean Prince and Kent Bazemore for the foreseeable future, and Huerter is their long-term answer on the wing. He’ll continue to see minutes in the mid-30’s. With the trade deadline approaching and Atlanta looking to unload a couple of veteran assets, Huerter’s role will only increase. It won’t be long before Huerter gets picked up off the waiver wire in most leagues. His outlook for the rest of the season should be intriguing to fantasy basketball owners.

(From last week’s waiver wire) It looks like Derrick White is finally getting acclimated to his role in San Antonio. He’s also chipping in with 2.5 steals per and hitting 1.5 threes. White is filling in at shooting guard and got a start at small forward. So his minutes shouldn’t be in jeopardy. White is a nice addition off the waiver wire while he’s hot and has a chance to keep performing at a high level going forward.

Burks is averaging 13.5 points, 4.5 rebounds, 3 assists and 1.8 threes on 49% shooting over his last 10 games. Those may not seem like eye-popping numbers, but Burks is getting a ton of opportunity on a team that has lost 12 straight games. Burks has the potential to put up big numbers, as displayed by his 22-7-9 line in early December. He’ll likely keep seeing around 30 minutes a game for the time being. If you need a plug and play guy off the waiver wire, Burks can help. He’s putting up top-75 value over the past two weeks, so you can do worse off the waiver wire.

LeBron James is still sidelined, which has translated to Hart’s increased playtime. Hart has been flirting with top-125 value over the past couple of weeks on over 32 minutes per game. He’s chipping in nicely with 7.9 rebounds, 2.7 assists and 1.4 steals per game. His shooting percentages have held him back though. If your team is punting FG%, then Hart’s 38.5% shooting won’t hurt and is worth a pickup. Keep an eye on the Lakers’ injury report though, Hart is likely going to take a hit when LeBron James returns to action. For now, Hart still looks like a solid add off the week 14 waiver wire.

(From last week’s waiver wire) Much like White, Bryn Forbes has inherited a starting job in San Antonio this season. His rest of season value will remain the same as will his minutes in the high 20’s. Forbes is a nice source for threes and is shooting a respectable 47% from the floor. Forbes isn’t the most exciting name out there, but still holds value for fantasy basketball owners needing a boost from deep in week 14.

It looks like the Mavs lost JJ Barea for the season. It’s a curious situation that’s about to unfold in Dallas rotation-wise. The logical outcome would be for Jalen Brunson to pick up Barea’s minutes. But the Mavs played Luka Doncic at point guard last night, giving Maxi Kleber the opportunity to prove his worth. Kleber is a stretch big that would fit nicely alongside DeAndre Jordan. He’s draining 0.9 threes a game and blocking 1.2 shots, which should increase moving forward. Kleber has been given more responsibility so far which is why he’s on this list over Brunson. But both could conceivably get some of Barea’s minutes with Doncic able to slide in at point guard and power forward. It’s also the same reason I didn’t rank Kleber in the top five on this week’s waiver wire rankings.

It takes a lot of consistent games for me to start eyeing such a finicky player like Jackson, but that’s exactly what he’s done over the past week. Jackson is averaging 15.6 points, 5.4 rebounds, 3.2 assists, 1.6 steals, and 1.2 threes while shooting 54% from the floor. Jackson’s best stretch of the season has given him top-75 value over the past week. The question is will he keep it up? The Suns are giving both Warren and Oubre more opportunity, though all three have seen the floor together. Jackson still holds that 4th overall pick pedigree and likely has more longevity on Phoenix with his rookie wage. Jackson falls more into the streaming category in week 14, but if he’s able to keep playing well, has a chance to stick in the rotation and lock in minutes for the rest of the season.

Melton has made this list before, and he gets back on the list in week 14 for the same reasons. The rookie point guard can contribute in every counting stat, and there’s a job up for grabs in Phoenix. Melton is riding an 8-game steal streak and is also averaging a block per game over that span. If your team is lacking in the defensive categories, Melton is available in 65% of Fantrax leagues. You’ll have to take the good with the bad, though. Melton is only shooting 39% from the floor. He’s also a great dynasty add that can help owners this season if need be. His shot selection and percentages should get better with more playing time. He has the potential to end up as an Eric Bledsoe archetype.

Bet you didn’t realize DJ Augustin was still in the league, much less that he’s been Orlando’s starting point guard all year long. At this point, we all know what Augustin brings to the table: threes, assists and some points. To his credit, Augustin has been shooting at a career-high mark of 46% this year. Orlando doesn’t seem to have another point guard to usurp DJ’s minutes, which makes him somewhat valuable for the rest of the season for fantasy basketball owners looking for assists. Augustin has been flirting with top-100 value over the past couple weeks. It’s rare to find a full-time starter off the waiver wire this late into the season.

I’m big on Harry Giles as his career unfolds. This may not be the season for him but he’s actually getting minutes as of late. He’s averaging just under 17 minutes in his last 6 games and capped it off with a solid 14-4-3-2-3 line against Detroit. The Kings are loaded with bigs, and there are rumors swirling that they’re trying to bring in Enes Kanter. Giles is more of a dynasty stash, but for what it’s worth, the Kings experimented a lineup with Giles playing some small forward. Keep an eye on him to see if the Kings keep giving him minutes, but Giles shouldn’t be a priority add in week 14.

Fantasy Hockey Goalie Report: Is Bobrovsky off the Case?