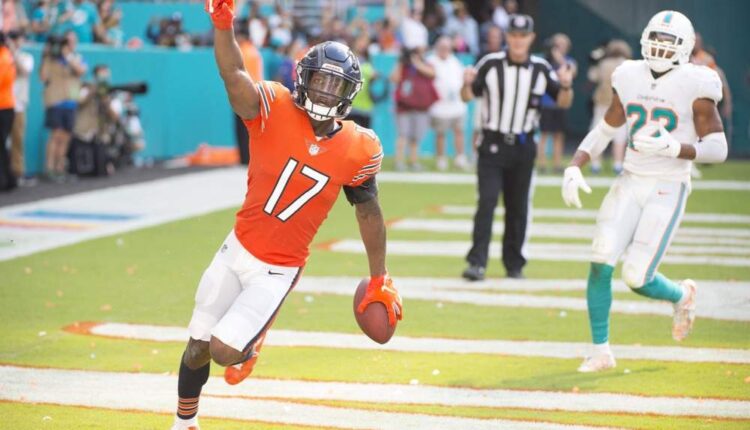 In Week 11 I believe that targets and usage will translate into Fantasy point for two wide receivers. After all, it is opportunity that we must look at when considering wide receiver sleepers for Week 11.

One rookie who I drafted- dropped- picked up, and dropped again had his breakout game in Week 10.

Miller, in my opinion, was the most polished route runner coming out of the 2018 draft class.  The Bears took him in the second round and promptly put him in the slot to utilize his quickness and sharp route-running.

The Bears have quickly lived up to the bill of being a potent offense with Matt Nagy at the helm and quarterback Mitch Trubeisky performing at a high level. In the past four games, Miller has had at least six targets. In Week 9, he had a season-high 49 yards and followed that up with 122 yards last week for a new career-high. Miller also played on a season-high 74 percent of snaps in Week 10 which sets him up nicely for a prime-time matchup against the Vikings on Sunday Night Football.

Miller, who also scored in Week 10, will benefit once again from Allen Robinson being on the field. The No.1 receiver had 98 yards and two touchdowns last week and will certainly draw the attention of stud cornerback Xavier Rhodes of the Vikings.

Fire up Miller and ride the hot hand.

The Ravens offense has been surprisingly generous to its wide receivers. If you like target-shares, then you’re going to love Willie Snead.

Playing predominately out of the slot, Snead has had at least seven targets in every game since Week 4. This includes 10 targets in Week 6 and 11 targets in Week 8. Unfortunately for Fantasy purposes, Snead’s season-high in yards is only 60. But, there are two specific factors that you should consider when projecting Snead’s Week 11 output.

Snead is one of my Week 11 wide receiver sleepers because he will be playing the Bengals who are on pace for a record-breaking year defensively- and not on the good side of the record books.

According to Darin Gantt of Pro Football Talk, the Bengals gave up over 500 yards in three straight games from Week’s 7-9. This is a first in the history of the NFL. They ONLY allowed 481 yards in Week 10, and are averaging 454.6 yards allowed per game. To boot, Joe Flacco may miss Week 11 with a hip injury, which means that Lamar Jackson would be the starting quarterback for the Ravens.

Snead, who is on the field for about 70 percent of snaps, has upside with Jackson in. The rookie will target his slot receiver just as much as Flacco and may rely on the short pass even more than the veteran. Snead’s volume is in store for a breakout game. What better time than against the worst defense in NFL history?