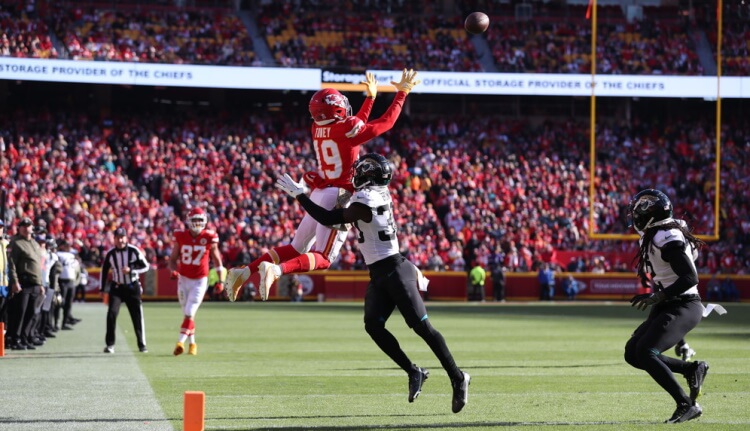 When identifying potential sleepers, snap count and target share are the name of the game. The difference between a player being a sleeper or just some bench piece is a very fine line. It is all about how productive a player can be with the limited looks that they receive. It is also important to consider their matchup and their team’s offensive scheme. The conclusion of Week 10 has left us with some more useful data points. Based on that, here are three Week 11 Sleepers and one honorable mention who could give your fantasy football squads a boost.

The cure to hamstring injuries is being hoarded by the Kansas City Chiefs medical staff. The moment Kadarius Toney touched down in Kansas City he was miraculously healed. His debut in Arrowhead Stadium was forgettable, but that was hardly his fault as he was new to the team and only played in 9% of snaps. Last week was a different story as a couple of injuries forced the newcomer into more playing time than he might have expected. He did not disappoint. It only took 63 targets, but Kadarius finally found the end zone for the first time in his young career. In addition to the touchdown, Toney added four catches for 57 yards and two rushes for 33 yards. I mentioned that Toney had seen more opportunities last week due to injuries, so I’d like to touch on those because they’re the main reason that Toney is emerging as a Week 11 sleepers pick.

Kadarius Toney hops his way in for his first career touchdown! #ChiefsKingdom @0fficialC2N

First MVS. His in-game injury did not end up being serious and he was actually able to return to the game. He caught three balls for 60 yards and one touchdown. Now JuJu. Man oh man, the hit that JuJu Smith -Schuster sustained on Sunday was enough to make even the most hardened man wince. Needless to say, he is in concussion protocol. The Chiefs are on the main stage, everybody saw that hit. I’m going to keep referencing it because it is important, but ever since the Tua injury teams are under more pressure from the league (as they should) to take more caution with head injuries. I’m not going out on a limb to say that JuJu is likely out this week. With a good week of practice, Toney could lead all wide receivers in yards and targets.

I thought I was excited for Josh Allen coming off a close loss/a Stefon Diggs revenge game narrative. While that did not disappoint, I think I’m even more excited about this game. It’s not often anymore that we see the Bills lose two consecutive games. I am pumped to see how Allen will respond. I imagine he will respond with multiple touchdowns, which is what put McKenzie on my Week 11 sleepers radar. McKenzie is not Allen’s first option, but Allen will be seeing red this Sunday. So as long as Isaiah gets open, the ball will find him.

Used sparingly in the first couple of weeks of the season, McKenzie has seen an uptick in usage in the last two games. In Week 9 he saw 66% of snaps and last week McKenzie saw a season-high 69% of snaps. The Bills get the Browns this week, and I do not need to tell you that the odds of the Browns pulling off an upset are very low. There are likely two outcomes for this week’s game. The Bills either throw everything including the kitchen sink (McKenzie) or flatten the Browns. Or the Browns could put up a fight, forcing the Bills compete throughout the entirety of the game. Isaiah hasn’t reached the end zone in four straight weeks after starting off the season with three TDs in four games. I believe that he gets back on track this week.

The activation of Elijah Mitchell off of IR was perhaps one of the least talked about transactions of the year. It went so under the radar that even DraftKings seemed to miss the memo. The betting app priced the backup running back at a minimum $200 on last week’s showdown slate. Around 22% of people took advantage of this pricing and played him in their utility slot. It was interesting to see how the 49ers divided backfield touches with Mitchell back and CMC being fully adjusted. Christian McCaffrey dominated snaps (65%), but Mitchell still got his opportunities. I think he’ll get enough this time around to enter Week 11 sleeper territory.

In spite of playing in only 35% of snaps, Eli Mitchell’s usage was through the roof. He actually outpaced McCaffrey with 18 carries for 89 yards, adding a pair of catches in the passing game. In a way, the backup role is better for Eli as it keeps him fresh through the ball game. Under Coach Shanahan, running backs are a vital part of the game plan week in and week out. I think that continues this week against the Cardinals who have given up the 11th most fantasy points to the running back position. If the Cardinals are once again without Kyler Murray, the Niners could just hit cruise control and run their way to a victory, overall helping Mitchell’s cause.

I don’t usually like picking running backs that are coming off of reaggravating an injury, but Gus Edwards has looked so good in limited action so far this season. He’s looked good to the tune of 4.13 yards per carry in Week 7 and 5.91 in Week 8. Edwards would sit out Week 9 against New Orleans and then he got the Week 10 bye to let his hamstring injury heal further. It has been reported that head coach John Harbaugh has given Edwards the green light to return to the field this week against a leaky Panthers run defense. Stylistically, the Baltimore Ravens are still a run first football team. They currently rank sixth this season in rushing play percentage (49.7%). Since their receiving corps (Andrews and Bateman) has taken a hit, that rate has picked up over the last three games(57.92%). A fully healthy Gus Edwards should benefit from this renewed rushing attack. This is enough for me to round off my Week 11 sleepers with Gus “Bus” Edwards.

“I was thinking about 45 when I was out there. This for him.”

Also make sure to check out our Week 11 Rankings which roll out on Wednesday morning: QB | RB | WR | TE | Flex Rankings