Week 11 Running Back Sleepers: The Curious Case of Chris Carson 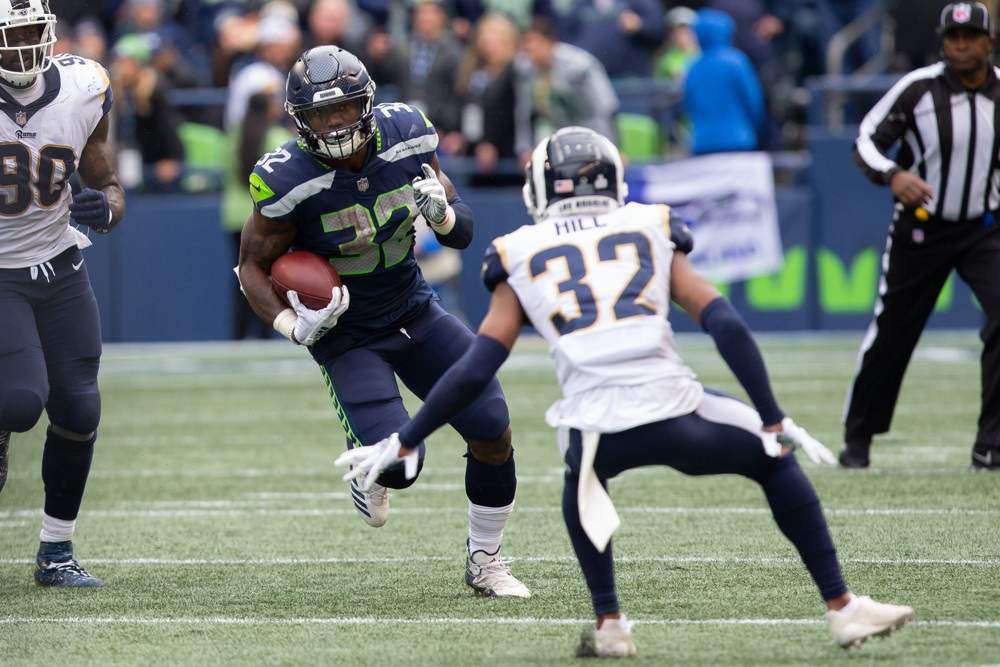 The impact of six NFL teams having a Week 11 bye will certainly affect the landscape of fantasy running backs. A quarter of the top 36 year-to-date point producers will be off this week. Several others have playing time concerns as the presumed starters on their teams are back in action. There are plenty of muddled backfield situations. And, as always, there are plenty of sleepers to be had. Concerns over injuries and playing time have the players listed below a bit undervalued heading into this week. For me, that equals an opportunity to capitalize. Here are my favorite Week 11 running back sleepers.

Chris Carson missed last week’s game while dealing with hip and thigh injuries. In Carson’s absence, Mike Davis has filled in quite nicely. Even previously jettisoned rookie Rashaad Penny has had his moments. It may be in both the team’s and Carson’s best interests to have him sit another week. But coach Pete Carroll indicated on Monday that Carson will play on Thursday night. It is a bit of a dicey situation, but if Carson is active, he should be able to make an impact against the Green Bay Packers.

Seattle runs the football at the highest clip in the league. They lead the NFL with 32 rushes and 152.2 rushing yards per game. They will want to keep Aaron Rodgers off the field, and their run game should help accomplish that goal. This is also an area where the Packers seem to struggle. Heading into last week’s action, Green Bay was fourth-worst among NFL teams in adjusted line yards on running plays, according to Football Outsiders. While the Week 10 data has not been published yet, I would guess that allowing 117 yards on 21 Miami carries did not improve that ranking much. The Packers do excel at getting to the quarterback, however. Their 31 sacks are tied for the most in the league. This is yet another reason why Seattle would be best served to keep the ball on the ground.

With his recent injury history and two other healthy and capable backs in the fold, Carson should not see nearly the high volume that he has been accustomed to in weeks past. Carson has received 95 touches in the last four games he has started and finished. Under no circumstances do I see him approaching anywhere near that type of workload in this game. But the matchup is favorable if he can stay on the field. It may also be beneficial that he plays on Thursday rather than in a late game on Sunday. Those who have him rostered will know his status heading into the game and can plan accordingly. Chris Carson certainly carries a fair amount of risk, but could be an under the radar RB2 this week, making him one of my top Week 11 running back sleepers.

Royce Freeman is coming off an ankle sprain that has cost him the last two games. He is also a two-down plodder on a team who is a significant underdog against one of the hottest teams in the NFL. Normally, those are not ideal circumstances. His injury status and potential game flow threaten his already tenuous workload. Freeman is far from a sure thing, but that is precisely why he is one of my preferred Week 11 running back sleepers as Denver faces the Los Angeles Chargers.

The Chargers have won six straight, but they have had a leaky run defense throughout the year. They have given up 4.36 yards per rush on the year and are trending in the wrong direction of late. Los Angeles has allowed five running backs to finish as an RB2 or better in their last four games. Even Doug Martin finished as an RB2 against them! (I know – I didn’t think it was possible either. If you think that’s crazy, wait until you see the next blurb.) The Chargers just lost middle linebacker Denzel Perryman to a knee injury, which will further weaken their run defense. Though Freeman is largely touchdown-dependent and has a very low floor, he should be worthy of Flex consideration in this matchup.

This might be a sign of the apocalypse. I don’t think anyone in the fantasy community hates Doug Martin as a player as much as I do. And yet, his circumstances suggest he is worth a long look this week. When Marshawn Lynch was placed on injured reserve last month, I stated that Jalen Richard was the Raiders’ back you wanted on your roster. And I still maintain that stance, though Martin has a slight edge over Richard in standard scoring during that span. But I favor Martin this week when the Raiders face the Arizona Cardinals.

Martin will match up against an Arizona defense that has allowed the third-most fantasy points and third most rushing yards per game to opposing running backs this season. They have also given up 11 rushing touchdowns on the year, trailing only Cleveland in that category. Though the Cardinals are a slight favorite, this is a game that is likely to remain close throughout. This would favor Martin over pass-catching threat Richard. Another notch in Martin’s favor is that the Cardinals do an excellent job of limiting receiving production out of the backfield. Only four teams allow fewer receptions out of the backfield than the Arizona Cardinals. All of these factors point to Martin being the preferred Oakland option this week. With so many quality running backs out of play this week, Doug Martin can be a sneaky fantasy play this week.

Ty Montgomery has yet to suit up as a Raven following his trade from Green Bay. It remains to be seen what Montgomery’s precise role with the team will be. I would imagine Ozzie Newsome did not trade for the former Packer so that he could sit on the bench. And while I do not expect Montgomery to necessarily threaten the workload of Alex Collins, I do feel that he will usurp pass-catching responsibilities from Buck Allen. If that is indeed the case, Montgomery makes for a very interesting option this week when Baltimore hosts the Cincinnati Bengals.

To say that the Bengals have struggled in run defense recently would be a massive understatement. Cincinnati has allowed a whopping 5.53 yards per rush to opposing running backs over their last five games. In their last three games, they have allowed three RB1 finishes and an average of 36.3 fantasy points to opposing backfields, including over fifty (!) points to Saints’ running backs last week. I would bump Montgomery up another notch if Lamar Jackson gets the start this week. The insertion of the rookie would likely result in a far heavier emphasis on the run. This means that Montgomery could see double-digit touches. In that scenario, he would be a speculative Flex play. Currently outside the top-40 in this week’s consensus rankings, Ty Montgomery is one of the Week 11 running back sleepers who can have a huge impact.