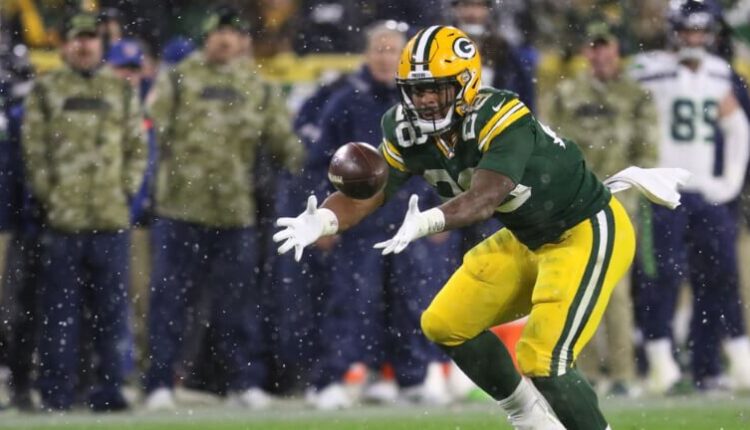 We are going to keep up with this article weekly for the rest of the season, giving you an analysis of the players that are growing in value, and those that are plummeting in my rankings. We are approaching the weeks where the playoff picture truly comes into shape, which is why it is important to be extremely active on the waiver wire and trade market trying to bolster your roster by any means. Here are my Week 11 Stock Up/Stock Down picks.

You may notice a trend in this article, but some of these guys are handcuffs because when injury hits, running back handcuffs become some of the most valuable fantasy assets one can have. AJ Dillon showed what he can do with a full workload when he rushed for 66 yards and two touchdowns on 21 attempts in Week 10. He also added two receptions for 62 yards in this contest. Aaron Jones is expected to miss at least one or two weeks with an MCL sprain. It is officially AJ Dillon season, expect him to get a massive workload, and he has the potential to be a bonafide top-10 running back over the next two weeks.

Tony Pollard is someone I am targeting before the fantasy football trade deadline. Zeke has been productive all things considered but so had Tony Pollard. There are only a hand full of guys that can legitimately win you your league if they were able to get a full workload in, and Pollard is one of them. But where he offers additional value is that he provides stand-alone flex value if you are in a pinch and need to start him now.

I have written about Renfrow in the past, but where I think he offers additional value now is that he is going to command an even more consistent number of targets with Henry Ruggs III gone. Renfrow has seen at least 8 targets in all three of his last three games. In other words, he provides a safe floor and does have touchdown potential as one of Derek Carr’s favorite red-zone targets. I think he can be safely played weekly going forward.

One thing that I don’t understand is how overlooked Hunter Henry has been this fantasy season. He has scored seven touchdowns in his last seven games. The main issue is that he really doesn’t get a ton of additional targets outside the red zone. However, given the fact that tight end production is so thin anyways, he is becoming a must-start considering that he has such a high chance of finding the end zone on a weekly basis. It is clear that Mac Jones is going out of his way to find Henry in the red zone.

The impact of Jerry Jeudy has really affected Sutton, and the situation seems to be getting even more troublesome. Sutton went from seeing 14, and 11 targets in Weeks 5-6, to seeing no more than five targets in any game since. This is a clear issue because he is getting to the point where one cannot even start him comfortably. It is seeming as if his only value would come if there were injuries to the supporting cast around him.

Marvin Jones Jr. had all the makings of being Trevor Lawrence’s safety blanket target in his first season, but over the last several weeks, Jones Jr. has virtually disappeared in this offense. He is seeing a decent share of targets, about 7.3 per game but even with a decent target floor, he simply isn’t producing to the tune that we thought he would in 2021. Dan Arnold and Jamal Agnew seem to be emerging as Lawrence’s favorite targets in this offense, with Jones Jr. becoming more of an afterthought. He is not someone you can start with confidence right now.

I discussed this early on in the year, where I talked about Mike Williams coming back down to earth after his nuclear start out of the gate this season. Since Week 5 when he saw 16 targets for 165 yards and two touchdowns, he has not seen more than six targets in any game. He also has not caught a touchdown since Week 5 as well. There is just a shift where teams are starting to pay more attention to Williams, and thus he is not seeing 10+ targets a game any longer. He still has the potential to have a massive week on any given week, as he is very talented. However, it’s predicting when these weeks are going to come that is going to be the frustrating part for fantasy managers.