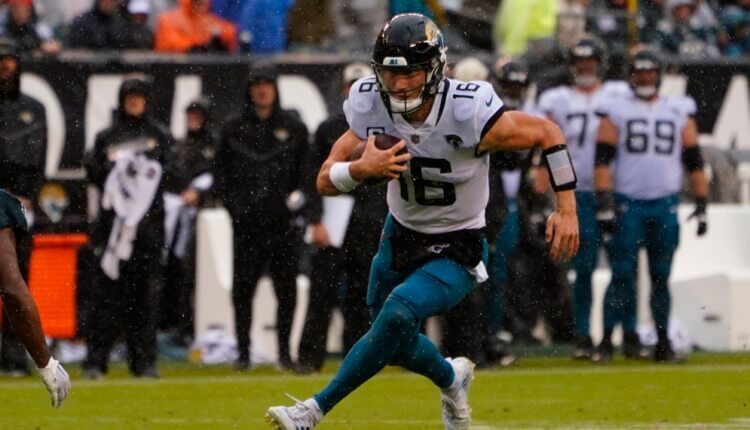 When identifying potential sleepers, snap count and target share are the name of the game. The difference between a player being a sleeper or just some bench piece is a very fine line. It is all about how productive a player can be with the limited looks that they receive. It is also important to consider their matchup and their team’s offensive scheme. The conclusion of Week 9 has left us with some more useful data points. Based on that, here are three Week 10 Sleepers and one honorable mention who could give your fantasy football squads a boost.

The jury is not quite out yet on Trevor Lawrence. His rookie season was pretty much a wash. That was mostly because he had the worst head coach in the history of the National Football League Urban Meyer. Still, 2022 has been up and down for Lawrence. He has turned in some decent fantasy performances and he’s dropped a few duds. Doug Pederson has mostly deployed a run-heavy approach so far this year. This makes sense because both of his running backs were very productive. But even with Etienne breaking out, this run-first strategy might not be as applicable this week. The Jaguars are facing a Chiefs team that is likely to put points on the board in a hurry. Don’t get me wrong, with the Jags trailing Etienne will still be involved, his involvement will just have to come through the passing game.

Trevor Lawrence headlines our Week 10 sleepers thanks to his matchup. I’ve heard of “bend, don’t break”, but this Chiefs secondary is doing a lot of both. Excluding Sunday night football against Malik Willis who had 5 pass completions, the Chiefs’ defense has given up at least 300 yards and two touchdowns in three of the last four games. TB12 got back on track against them in Week 4 with 385 yards and three TDs. In Week 6 Josh Allen tuned them up with 3 TDs and 329 passing yards. I know, it’s the GOAT and Allen. But lesser quarterbacks have also found success. Jimmy G put up 303 and two tuddies against them, Derek Carr 241 and 2 TDs, and Matt Ryan 222 and 2 TDs. So it’s not just the quarterbacks destined for the Hall of Fame that the Chiefs D lets score, everybody gets a pass.

Want a full week of anxiety? Go ahead and insert a Kansas City running back to your RB slot on this fine Tuesday. The usage on the ground has not been there this season for the Chiefs at all. So far this season the Chiefs are bottom 10 in rushing yards (828) and bottom five in rushing attempts (186). Because of the poor running back play the Chiefs have committed to the air. In their last three games, the Chiefs have passed on a whopping 72% of their offensive plays. In a competitive Sunday Night Football game, the Chiefs’ leading rusher was Patrick Mahomes. He did it himself with 6 carries for 63 yards. The three active running backs (McKinnon, Pacheco, and CEH) all combined for an inexplicably inexcusable 14 yards. It’s safe to say the running game is dead in Kansas City.

If the run game is dead, then why am I nominating a Kansas City running back as one of my Week 10 sleepers? Two reasons, Jerick McKinnon doesn’t rely on carries to reach his ceiling and he’s the running back that is on the field the most. For instance, last week McKinnon saw a 62% snap count, while Pacheco and Clyde Edwards-Helaire saw just 22% and 17%. This timeshare has presented itself for a couple of weeks now in a couple of different game scripts, so it seems that this will be the new norm. McKinnon hasn’t “popped” in a minute, but he’s been a reliable target out of the backfield for Mahomes. Just last week he caught six of eight targets for 40 yards. He’s on the field too much not to find the end zone soon. Against the Jaguars, odds are that this is his week.

Still no touchdowns for Mr. Peoples-Jones. I believe that this trend will come to an end this week. I also fully expect Chris Godwin to collect his first score of the season as well, but that is a story for another day. DPJ and the Browns are fresh off a bye after clobbering the Cincinnati Bengals on Primetime television. This week they get the high-octane Miami Dolphins (that felt weird to type). Miami is no doubt going to score points against this Cleveland team. Tyreek Hill is seemingly good for 100 yards and a score each game, while Waddle has been doing the same. The Dolphins even recently acquired Jeff Wilson from the 49ers, who settled right in with a touchdown last week. This team is dangerous, it would not surprise me if the Browns are forced to abandon Nick Chubb and the run game early in this one.

If the Browns indeed are forced to air the ball out then DPJ obviously stands to benefit. Peoples-Jones is the bonafide, uncontested WR2 in the Browns’ offense. When David Njoku is healthy he slips down to the third pass-catching option. Regardless of the health of Njoku, Peoples-Jones is on the field a ton. He played 93% and 96% of snaps in Week 7 and Week 8. He was also perfect in both of those games catching 6 of 6 and 4 of 4 targets respectively. Once again, no tuddies for the big guy, but he has been productive otherwise. DPJ now has at least 70 yards in four of his last five games. Donovan has the potential to outscore all of my Week 10 sleepers if he is able to have another solid yard yardage day and finally reach pay dirt.

Chase Edmonds is out of Miami and thank goodness. Edmonds didn’t fit what the Dolphins were trying to do on offense. He was quickly phased out of the team’s plans before being traded to the Denver Broncos. The Broncos are in desperate need of a boost at the running back position. Chase Edmonds doesn’t exactly provide that, but he should be a nice little weapon for Russell Wilson out of the backfield. Edmonds is known more as a pass catcher, his number is rarely called on run plays. Chase Edmonds is with a new squad, but I believe he’ll be able to play a ton right away. Unlike most players traded this season, Edmonds was lucky enough to have a bye week to get a better grasp on the playbook. Either way, the Broncos haven’t been shy about giving newcomers the football. Latavius Murray basically erased Melvin Gordon when he arrived, Edmonds could do the same to Murray. It would not shock me to see the Broncos deploy a strategy similar to the Chiefs and just throw the ball. If that is the case and the Broncos let Russ cook, then it’s Edmonds who is going to play the Jerick McKinnon role and most likely be on the field the most.