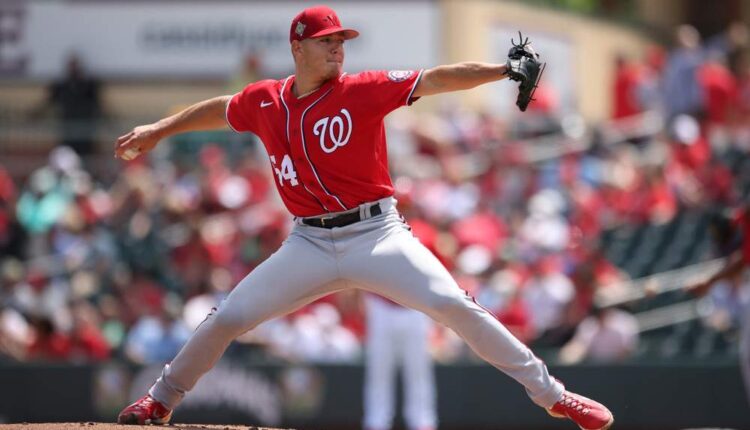 Welcome to our 2022 team top prospect rankings series. Eric Cross and Chris Clegg will go through all 30 Major League organizations, continuing today with their Washington Nationals Top Prospects for dynasty leagues. In each installment of this series, you’ll find the top-20 rankings from both Eric Cross (AVG) and Chris Clegg (OBP) along with one prospect each that they’re targeting heavily in dynasty leagues right now. Hopefully, these rankings will help you in your dynasty leagues, and maybe give you some new trade targets to consider.

Before I get to Cole Henry, another player I wanted to mention was Cristhian Vaquero. He’s my unquestioned #1 player from the 2021/22 international class with huge upside. Go get him in dynasty.

Alright, now onto Henry. The Nationals selected Henry in the 2nd round of the 2020 draft and the 6’4 right-hander didn’t disappoint in his first professional season. In 47 innings, Henry compiled a 2.30 ERA, 0.85 WHIP, 6.6 BB%, 38.3 K%, and 19.6 SwStr% between complex level and Hi-A. He was limited to those 47 innings due to an elbow issue, but that appears to be in the rearview as we begin the 2022 season. Due to the missed time, Washington got Henry some additional work in the Arizona Fall League where he pitched to a 3.32 ERA with 30 strikeouts and nine walks in 19 innings.

That elbow issue popped up five starts into his 2021 season and forced Henry to miss 2.5 months. After two rehab outings in the Florida Complex League, Henry finished the season strong in Hi-A. In his last four starts of the season, Henry posted a stellar 0.47 ERA, 0.63 WHIP, 4.3 BB%, and 40.6 K% in 19 innings.

Henry works with a three-pitch mix: A four-seam fastball, curveball, and changeup. Henry’s four-seamer is plus in mid-90’s with solid life, but his curveball might be his best pitch with plenty of depth that can misses bats easily. The changeup was a distant 3rd pitch but has really developed over the last year or so, showing good fade and sinking action. Command and control have also ticked up from his LSU days, both around 50-grade currently. Due to the elbow issue and an arm issue at LSU, there’s definitely an element of risk in Henry’s profile, but the upside is a mid-rotation arm, and the gap between him and Cavalli might not wind up being as big as people think.

Brady House is the player to buy from the Nationals for dynasty leagues. House was one of the top prospects in the 2021 MLB Draft and fell into the lap of the Nationals at the 11th pick. House has massive raw power and is an elite athlete despite his size(6’4/215). While it is entirely possible that House moves to third base with time, he’s extremely strong in the field at shortstop.
House often gets overlooked because of his contact skills. There is no denying the raw power, but House’s ability to control the strike zone is very good as well. He can hit the ball to all fields with excellent power.

In his debut last season in rookie ball, he slashed .322/.394/.576 with four home runs in 59 at-bats. House will get his first big test in professional ball in Low-A this season, but he has the skills to excel. House is a great buy in dynasty leagues as his perceived value is much lower than the upside that he has to offer.